Standing for the Common Good 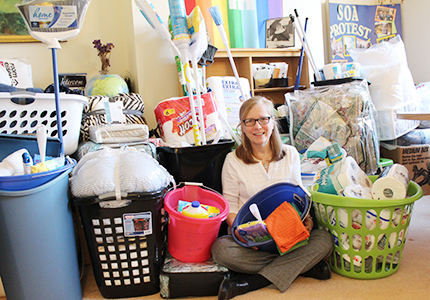 Debbie first became aware of the systematic injustices that governments can inflict on its citizens during missionary work that predated her time with the Sisters of Charity. During one of these missions to Guatemala, she built a friendship with S. Sarah Mulligan. She found that her belief system was mirrored in the intentions of the Sisters and their charism. Under the tutelage of Sisters Paula Gonzalez and Sarah Mulligan, Debbie became an Associate in Mission to the Sisters of Charity in 2010.

The well-being of all living creatures, human and nonhuman, has been the driving force of all movements that the Office of Peace, Justice and Care for Creation has participated in. While Debbie has always been concerned with the efforts to expunge racism, sexism, nationalism and similar issues, she came into her own element when she was appointed the director of the office.

Through the guidance of the Sisters, Debbie was able to discover the importance of seeing the dignity of every human being on a scale that she hadn’t seen before. Her ministries have included work to help migrants, combat racism, eradicate the death penalty and advertise peace and nonviolence among the many issues they face. Debbie describes her place of work as both reactive and responsive as they will adapt their mission to oppose whatever glaring issue that may arise that contradicts the vision of peace that the Sisters of Charity stand for. The office currently focuses on issues of the death penalty, gender inequality, racism, peace and nonviolence, migration, human trafficking, care for the Earth and the issues plaguing the Democratic Republic of the Congo.

In response to this myriad of issues in the world, the Office of Peace, Justice and Care for Creation has taken part in just as many civic practices to combat them. For example, in their pursuit to end the injustices behind migration, the office takes part in collecting household items, culturally appropriate foods and personal care items to help “our migrant neighbors in the Greater Cincinnati area.” They also collect personal care items for victims of human trafficking. In terms of civic action, the office also coordinated the Human Trafficking Symposium in October 2015 to bring this issue to light and helped draft the Congregational Stand against human trafficking that same year.

Their service goes beyond physical comfort, as the office constantly raises awareness to the Community by offering their thoughts and prayers to people who are sentenced to the death penalty. “An action is offered to request clemency for the inmates,” Debbie says.

The Sisters of Charity have been invoking feelings of charity throughout their ministries and it was a tradition of service that harmonized with Debbie Weber’s selfless spirit. The Community gave her an outlet to explore her potential as a leader as well as an active citizen. She says, “The Sisters and I work together for God’s creation. In the end it’s all about the common good. I think that’s the bottom line.”