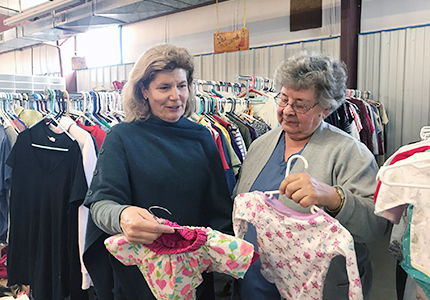 Anne Stattelman (left) and S. Nancy Crafton have worked together since the 1990s in their tireless pursuit of justice for immigrants.

“I didn’t cross the border; the border crossed me.” This is a phrase that Anne Stattelman has heard many times through her years as a concerned citizen that is actively combating the issue of immigration. As a volunteer in the Diocese of Pueblo, Colorado, she has been exposed to the injustices surrounding immigrants in their journey to cross the border and in their life in the United States. In response to this disheartening reality, she met Sister of Charity Nancy Crafton who gave hope to this community. Through her work with S. Nancy, these two are setting an example of what it means to be inclusive to the citizens of the world by standing with immigrants.

When Anne first came across the issue of migration, she responded almost instinctually. In what she describes as, “one of the major humanitarian crises in this area,” Anne was inspired to serve with the Posada program, which acts to integrate immigrants into the community. She says, “Immigrants live in the most unsafe and unsanitary conditions in Southern Colorado, they are also preyed upon by lenders, landlords and the gangs and the mob in this area.” Because of the many horrible stories that she was exposed to, she felt disheartened that such an issue could be so cruel to people so genuine.

During her ministries in the 1990s, Anne began working alongside S. Nancy Crafton to confront the housing issue that most migrant workers in the area faced. In a community comprised of mostly migrant farmers that have suffered at the hands of the unfair policies that target them, the responsive S. Nancy came to the area to lend a helping hand. Stattelman says, “She is not only the boots on the ground to address the temporary needs of the immigrant community; she does whatever she is called to do to address the systemic and intractable issues surrounding immigration reform and to fight the powers-that-be.”

S. Nancy and Anne currently minister together sharing clients at El Centro de Los Pobres and at Posada, which provide a wide range of services that include food, clothing, utility and medical services. In addition, S. Nancy is responsible for the creation of a clinic aimed at serving those who lack any sort of medical care. S. Nancy, in particular, is held in high-esteem in the community because of her relentless pursuit of justice. Stattelman says that S. Nancy works endlessly to serve the “poorest of the poor” in the area.

Reciprocating this sentiment, S. Nancy has commended Anne for her tireless pursuit of justice for migrants. Their work has bred an important friendship to both of them in their ministries, one that is selflessly rooted in the service of others. S. Nancy says, “[Anne] lives the Gospel values with intensity. I have learned much from her drive for social justice and for ‘holding the feet to the ground’ of those in authority. ”

Inspired each day by her service with S. Nancy Crafton, Anne has remained hopeful that their work will have a lasting impact. S. Nancy has become an invaluable asset to her immediate community and she has continued to inspire others with her strong faith. As Anne says, “If Pueblo County has a moral compass, it is S. Nancy Crafton.” But, according to S. Nancy, Anne is an invaluable asset to the ministries that they both face.