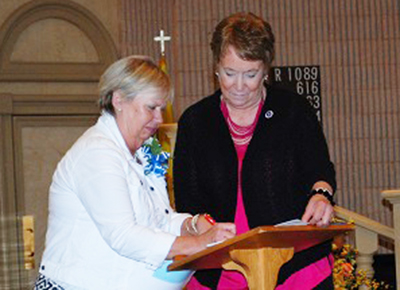 “Believe in God, and all things are possible,” says Susan Keister, one of several new Associates to have recently made their commitment in 2015.

Susan became an Associate in Mission with the Community in May, two years after her conversion to Catholicism in 2013. Her father and his extended family were all Catholics, but her mother raised her Lutheran, and later Susan joined the Episcopalian church. Prior to 2013, as a nurse, she met the Dominican Sisters while working in a Catholic hospital, and since she has joined the Church, has found the community to be “so kind,” and like a family to her.

Following her participation in the Rite of Christian Initiation of Adults (RCIA) program, she was given several options of service in her parish (St. Francis Cabrini Xavier in Spring Hill, Florida), and chose to go into Eucharistic ministry. This was how she came to know the Sisters of Charity of Cincinnati, and how she decided to become an Associate.

“I met S. Mary Loyola Mathia—she is the most dynamic person I have ever met,” Susan said. At Sister’s farewell party last year, she was asked if she was going to join the Sisters of Charity. After being asked this same question again on a separate occasion, and after a period of consideration, Susan decided that she wanted to make her commitment as an Associate. She has also has gotten the opportunity to meet director of Associates Mary Jo Mersmann, and has been impressed by her kindness. Susan hopes that she can touch others’ lives as S. Mary Loyola and Mary Jo have hers.

She says her faith has been strengthened by the miracles she has witnessed in her life, not only as a nurse, but also within her family. Her late husband, after being diagnosed with lymphoma, survived for another 15 years. “I am sure God is in charge,” Susan relates. “My faith is unwavering.” She also takes inspiration from Elizabeth Seton, whose spirit so many people try to follow and incorporate into their daily lives. Of the saint’s dynamic example, Susan says, “It is hard to compare yourself to someone like that, but [her spirit] is something to strive for.”

Originally from Columbus, Ohio, Susan now resides in Spring Hill, where she is retired. She is very busy not only with participating in Eucharistic ministry, but also extensive volunteering; she devotes her time to three facilities including a nursing home, rehab facility, and an extended care facility. In her spare time, she enjoys listening to music and flower gardening.