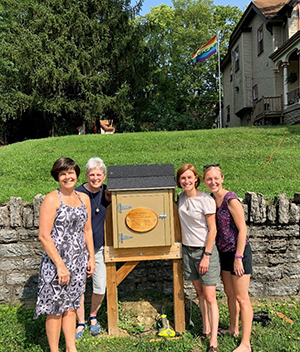 Sisters of the Visitation House (from left) Andrea Koverman, Louise Lears, Annie Klapheke and Tracy Kemme use the prayer house built to respond to their community in a unique way.

Against the backdrop of the Visitation House in West Price Hill (Cincinnati, Ohio) stands a modest sign that indicates a place in the community where people can unite for the same purpose: to deliver their prayer requests. This place of communal prayer allows the Sisters of Charity, who created the prayer house for their community, to empathize with their neighbors and the issues that they face.

The Visitation House neighborhood has an ethnically diverse makeup of its populace. Because of this, it is made vulnerable to systemic issues that commonly affect minorities, namely the Hispanic communities experiencing poverty. With so many issues existing around them, the Sisters of Charity who reside at the Visitation House felt a desire to contribute to their community in a unique way. S. Annie Klapheke felt that the best way to respond to the needs of their community would be to use the unifying experience of prayer. This resulted in the creation of a prayer house where members of the community could submit their special intentions. S. Annie’s father and self-taught carpenter, Mike Klapheke, built the prayer house that became such a success. A wooden sign in front of the prayer house, which was created by S. Shirley Le Blanc, instructs people to write their prayer request on a piece of paper and place it in the small prayer house, similar to a mailbox. “Our hope for the prayer house is that our neighbors will know that we care about them and that we want their lives and concerns to become a part of our prayer,” she says. 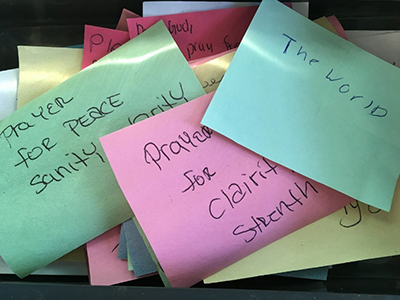 The first prayer request was received within 24 hours of the sign being posted and word quickly spread throughout the neighborhood. “I think the project was such a hit because it taps into a common human longing: to have hope in a higher power, a power that many people recognize as God,” S. Annie says. The number of requests can vary from three to eight prayers a week, most of which are delivered on foot.

The Sisters were surprised not only by the volume of people who are participating in the project, but also by the diversity of people that come to share in the experience. One case of this was when a burly man stepped out of his pick-up truck to submit his prayer request. One of the Sisters retrieved the request, which compassionately asked for prayers for his dog who was suffering from seizures. While the prayer house gives people a chance to ease the suffering of others, it also serves to ease the suffering of one’s self; such was the case when the prayer house received a two-page letter which depicted a woman’s struggle with addiction. “It seemed like simply writing the letter and expressing herself in words provided a small bit of healing,” she says. These prayer requests are read aloud by the Sisters in their daily morning prayer to help the needs of their community.

S. Annie found that the project is in accordance with the Sisters of Charity Constitutions which state: “We seek to testify to God’s active presence in and among peoples… and reinforce by the testimony of our lives that God is present in and concerned about human affairs.” Prayer, she believes, is one of the many ways that people can testify to God’s active presence, but the prayer house allows members of the community to testify against certain systemic injustices that are prevalent in their locality. This has inspired them to make changes to achieve equanimity in the city of Cincinnati. Sister would recommend to any religious institution to take part in a project similar to this one because it allows others to become aware of the issues that hide in plain sight.