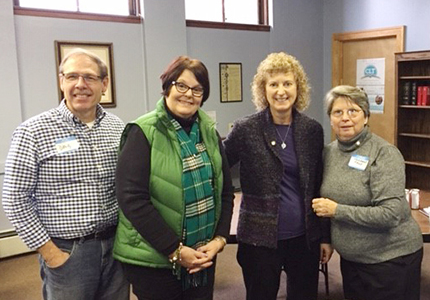 Therese Frye (right) made her commitment as an Associate in Mission in June 2018, and serves at the St. Vincent de Paul Society in Detroit, Michigan.

From her earliest years, Therese was introduced to the works of the Sisters of Charity by having a great-aunt who belonged to the Congregation. She was also educated by numerous Sisters of Charity since they had taught her through 12th grade. Because of this, Therese realized the similarities between her values and theirs. “I believed in their mission, what they did and what they did for me individually as a student and as a person,” she says.

She made her formal commitment as an Associate in Mission in 2018 after a year of study of the Sisters of Charity and their charism under the tutelage of her co-worker and friend S. Noreen Ellison. Therese says that after a period of discernment, she knew that she wanted to become an Associate and made the commitment in her heart. “I made a very good friend with S. Noreen Ellison who saw in me the potential to become an Associate,” she says. “It was a perfect fit.” Therese credits the keen guidance of S. Noreen as one of the many influential factors on making this decision.

As an active member of the St. Vincent de Paul Society for more than 25 years, Therese has assumed challenging leadership roles even while she was still working full time as a registered nurse in a local hospital. Therese is currently the president of the SVDP Archdiocesan Council of Detroit and the Board of Trustees. In addition, she is active in two conferences. Sometimes, she is a team member in the ongoing formation programs with other Vincentians. This volunteer service takes about 30 hours a week.