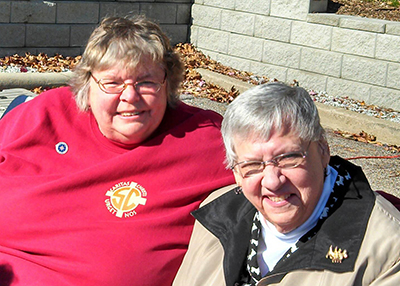 Vicki Welsh has been an Associate of the Sisters of Charity of Cincinnati for more than 10 years, making her commitment in 2003. After all this time, the moment the idea of becoming an Associate entered her mind is still fresh in her memory.

“I was at the Motherhouse for a program and Mary Jo Mersmann approached me afterwards and said, ‘I hear you come to these programs a lot.’ I said, ‘I guess I do. I know many of the Sisters. It’s a comfortable place for me.’ At that point she asked me if I had ever thought of becoming an Associate. I said, ‘I’m not even Catholic, I’m Lutheran.’ She said, ‘Oh, you don’t have to be Catholic.’ And she suggested I talk to her about it. So I did.

“At that time I was beginning to ask questions and seek more of a spiritual journey than a denominational journey. At the Mount, everyone knew I was protestant and they never excluded me. They always included me in everything. I had never felt that I was something different than the rest of the girls. It just seemed to be the right fit at the time for me to branch out beyond my Lutheran roots to other ways of being a child of God. At that point I was coming to Mass every morning before I went to work. It was just a good, good fit. I found myself. I always feel that when I come through those doors, I’m home.”

Mary Jo Mersmann was right to say that Vicki was at the Motherhouse often. After graduating from the College of Mount St. Joseph with a degree in speech, theatre and education, Vicki found herself returning to the Mount time and time again.

“I started doing retreats and I needed a place to bring women, so I came to the Motherhouse to see if I could bring my Lutheran ladies to the Mount for retreat. The Sisters were extremely receptive. I must have brought people here for 25 years. Throughout those years, I was always finding myself back here for something. There would be programs I’d go to when the Spirituality Center was developed and they started different kinds of programs. It just seemed like more and more I found myself coming here.”

It was when Vicki first went to the College of Mount St. Joseph that she came into contact with Sisters of Charity. She was a classmate to many Sisters. She found them to be “challenging and bright.”

Vicki said, “What I enjoyed most about the Sisters was the atmosphere that I had something to offer. They wanted to hear what I thought and how I felt about things. I hadn’t heard that in high school; there was never a universal cry that what you have to say and what you’re thinking has value.”

Currently, Vicki lives in Saylor Park, Ohio. “I’m five minutes away from the Motherhouse,” she said. This is a good thing considering, according to Vicki, most of what she enjoys to do is centered around the Mount.

“I sing with the music ministry, I’m a part of their vigil ministry, I’m on the Communications Advisory Committee, and I’ve served on several other boards. I’m very involved in the life of the Community, which has been fun because I can do things during the day that I was not able to do when I was working.”

Before retirement, Vicki had always been involved in education, ranging from working with high schoolers to working with preschoolers. Now, Vicki still spends a good amount of her time with children, her grandchildren.

“Grandkids are the best. I have a grandson who’s 8 and a granddaughter who’s 6. It’s been a lot of fun. They’re here in town and I know how fortunate I am to have them close by. I get to see them grow up. My husband and I do a lot with them.”

Aside from spending time with her grandchildren and her Mount family, Vicki is in the process of discerning lifetime membership as an Associate of the Sisters of Charity of Cincinnati.