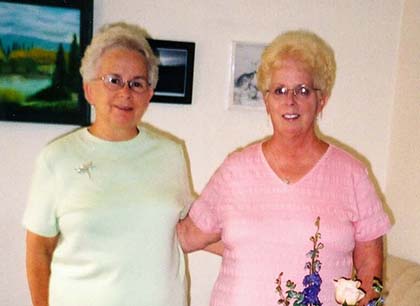 Virginia Cochran did not learn about the Associate program until later in her life, but when she did, it prompted a renewed curiosity in her. She read the Life of Elizabeth Ann Seton once more, and began learning more about the Sisters of the Community that Elizabeth had founded. After about a six month process, she decided to take her commitment as an Associate of the Community in 2004.

She had always known the Sisters of Charity, however, who entered her life in the first grade when she began attending St. Mary’s School in Marion, Ohio. She and her sister, S. Jeanette Cochran, were taught by the Sisters for 12 years in the same building; as the two grew up, Virginia loved to talk with and learn from her teachers. Following their experiences throughout grade school and high school, S. Jeanette chose to enter the Community in 1956, while Virginia decided to enter the teaching field.

“I am a retired teacher who mostly taught in Ohio,” relates Virginia of her 35-year career as an educator. This separated her from S. Jeanette for many years, who went to minister as a Albuquerque. Eventually, Virginia went out west to be near her sister, and remained with her until S. Jeanette chose to go back to the Motherhouse a few years ago.

Virginia stayed behind in Albuquerque for a while, and following her commitment met with a group of 22 Sisters and Associates once a month for socializing and prayer. She enjoyed the new closeness with the Sisters that her Associateship brought on. This closeness continued when she moved back to Ohio four years ago and joined a smaller Associate group led by S. Betty Finn in the Motherhouse; she also reunited with S. Jeanette, with whom she has established a strong friendship once more.

Since her move to Ohio, she has found happiness in volunteering at the desk in Mother Margaret Hall. “I enjoy the Sisters more than the paperwork,” she jokes about her time there, which has allowed her to grow quite close to the Sisters who reside within. She also hopes to participate in a tutoring program for the children of employees at Mother Margaret Hall, in continuance of her love of teaching.

“I have become more aware of the needs of other people,” says Virginia of her Associate ministry so far. But she does not feel that it has altered her personality—she is committed to assisting the ministries of the Sisters, so the transition into her Associateship was not a difficult one. Of her fellow Associates’ similar mindset she relates, “We are all on the same page. We just live our lives and try to do good.”

Virginia emphasizes that Elizabeth Seton possessed an ordinariness with which one can identify and aspire to: “Her simplicity, her urge to help other people, never stopped.” The spirit of Elizabeth Seton continues to live on in all of the good Associates do in the world.