By Margee Garbsch, director of marketing and communications, DPCR

A large, colorful mural that hangs prominently at DePaul Cristo Rey High School is artist Holly Schapker’s beautiful interpretation of the Biblical parable of the mustard seed. The mural’s images which include St. Vincent de Paul, Mother Margaret George and the Motherhouse chapel arches, illustrate the Sisters of Charity vision to start a school. It was a mustard-seed-sized idea that began ahead of the Sisters of Charity’s 2007 General Chapter. It has flourished into a thriving high school and in the months ahead, the vision will come full circle as members of its first graduating class complete college. 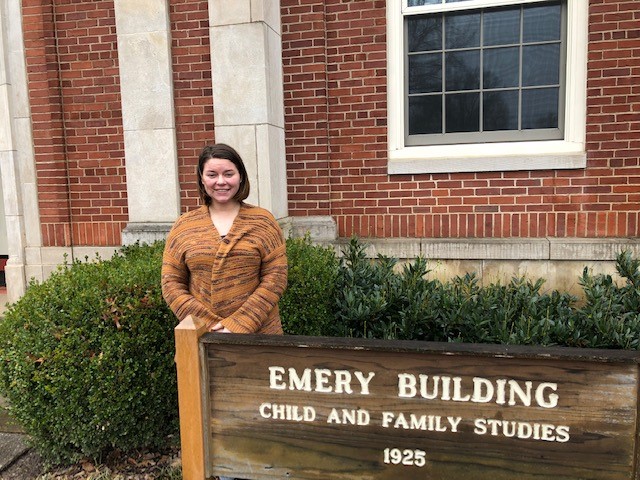 Theresa Bruns was in DePaul Cristo Rey High School’s first graduating class and this May, she will be among the first to complete college.

Theresa Bruns was in DePaul Cristo Rey’s (DPCR) first class which graduated in May 2015 and this May, she will be among the first to complete college. She’ll graduate from Berea College though she readily admits she almost didn’t graduate high school. “I got pregnant my junior year; I wanted to leave DPCR and finish through an online school. Principal Farfsing refused to let me leave,” she says. “The only reason I graduated on time and am where I am today is because he made me stay at DPCR, and I had amazing support from my teachers.”

Berea was a perfect fit for Theresa with its “no-tuition promise,” work study jobs for all students, and on-site child care. She and her daughter, Vivian, shared an on-campus apartment. “I lived at Berea the entire time; it felt safe to me,” she says. “The work study program also felt a lot like DPCR – I knew how to interview, how to dress appropriately, and how to do office work,” skills she says she learned through DPCR’s Corporate Work Study Program.

While her family is not Catholic, she attended Holy Family School for grades four through seven and chose to be baptized. That’s where she first encountered Sisters of Charity. “S. Brenda Busch was the principal. She may not remember me, but I remember her – she definitely influenced me,” says Theresa. “I think it was a bold move for the Sisters to open DPCR, but they definitely knew what they were doing. For me, I know I probably wouldn’t have gone to college if I had gone to any other high school.”

With her bachelor’s degree in Child and Family Studies, Theresa is applying for social work positions to start her career, and in the fall Vivian will begin kindergarten. They will cross the stage hand-in-hand when Theresa receives her diploma at Berea in May.

Rico Bush, also a member of DPCR’s first class, plans to walk across the stage at Mount St. Joseph University’s graduation ceremony when he finishes his bachelor’s degree in Behavioral Science in 2020.

While in eighth grade at Corryville Catholic Elementary School, staff introduced him to the not-yet-open DePaul Cristo Rey. “My family is Catholic and my mom wanted me to continue my Catholic education. The low cost of DPCR’s tuition appealed to her,” he recalls, “and I wanted to try something new.”

Rico remembers first meeting Sisters of Charity during the summer ahead of his freshman year when his fledgling class visited the Motherhouse. “That was a great experience. You never really know people until you can hear their stories and we heard their stories. They’re quiet but powerful women,” he says. “They had a vision before DPCR actually existed.”

That vision has had a tremendous impact on him. “I believe DePaul Cristo Rey has shaped me into who I am today,” he says. “The Corporate Work Study Program taught us professionalism, how to conduct ourselves, and we had resumes before we even started college. And our DPCR teachers kept pushing us. We received tremendous benefits that other schools don’t offer.”

Rico will be the first in his family to achieve a college degree. While at the Mount, he has been active in the Black Student Union promoting diversity and inclusion among his peers. While he continues to discern his specific career path, he knows he wants to be in a field that helps people. His family is very supportive; his father tells him, “I want you to do something you love to do.”

The mustard-seed idea and early vision of the Sisters of Charity are the roots of the school’s mission statement: “DePaul Cristo Rey High School, sponsored by the Sisters of Charity of Cincinnati, transforms students into high school and college graduates by helping them realize their full potential. Our Catholic, college prep curriculum and innovative work study program combine to form young women and men of integrity, faith, tenacity and purpose.” Rico and Theresa are inspiring examples of that mission come to life. As Theresa says, “Without DePaul Cristo Rey, I would not be where I am now – with so many options for my future.”