S. Victoria Anyanwu:Turning the Tide Against Illness in Nigeria 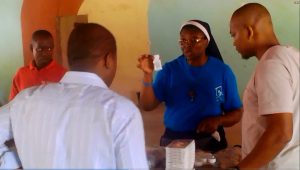 Water is the giver of life; it can save a thirsty people or nourish a weak body into health. Most importantly, it binds all human beings together. Like a gentle, wayward wave that curls around the toes of people on beaches around the world, Sister of Charity Victoria Anyanwu reaches out to others to nurture physical strength and spiritual health. Helping others has always been a habit of hers since she was a young girl, but it has grown into her life’s mission. This mission inspires her to make routine visits to her home country of Nigeria to meet the needs of the impoverished people during their time of hardship.

Victoria first considered the field of nursing in 1993 when she was serving as a social worker in Nigeria. When she arrived in the United States in 1995, she followed through with her dream and attended the Christ College of Nursing and Health Sciences in Cincinnati, Ohio. The wellness of others became and remains her top priority, but it is not limited to just the physical well-being; finding a spiritual connection and growth in others has been her calling that she has pursued through her life as a Sister of Charity. S. Victoria made her perpetual vows in October 2010 and has fulfilled her promise to serve others since.

Equipped with these new medical skills and a prayerful awareness, S. Victoria began to take biennial visits to her home country since 2006 to lend a helping hand. In preparation for these visits, S. Victoria budgets her resources in order to purchase some of the needed medicines, equipment and food to treat patients in her childhood community of Ihitte and any neighboring villages. She says, “It doesn’t matter if it’s my home community or not. When God has blessed us, we have to bless others.” Instead of only offering an immediate relief to some of the afflictions that plague these communities, S. Victoria makes an effort to educate her patients so that they may better take care of themselves and their families.

The most basic necessity for each human being is access to clean water, a luxury that the people of this country cannot afford. One of the major seasons of the year includes a dry period that typically lasts from August until April. When the stored water that they have runs out, they are forced to purchase a jar of water for .50 cents, but this rarely suits the needs of an entire family. People of these communities are reduced to using the highly polluted water that is at their disposal which can result in diseases like malaria, typhoid, diarrhea, hepatitis and diabetes during the dry season. These waterborne diseases are carried through stagnant streams and murky ponds that many use to retrieve their water. In response to this issue, S. Victoria has been working to create a borehole in her old village which will provide readily available and reliably clean water for the communities.

Some of the treatments that S. Victoria offers to her patients can often be teaching moments for the people of Nigeria because their treatments can be found in natural habits instead of medicine. For example, she encourages her patients to find the sources of headaches that are typically caused by lack of food, lack of water or general stress; instead of giving them Tylenol to numb the pain, she can provide a more reliable source of treatment that is accessible to them and will work better. As S. Victoria says, “When you give someone Tylenol on an empty stomach, you’re just inviting a stomach ache.” Patients typically find that they are dehydrated or hungry and the headache signifies their empty stomach. When there is a medicine that she does not have but is needed for a patient, S. Victoria will find a natural alternative for them to use beyond the timeframe of her visits. She says that teaching people about the human body is often the best treatment. As a nurse, S. Victoria strives to offer the best treatment to her patients because, as she says, “Every patient that I have is my responsibility. Their life is in my hands. I will treat them like I’m treating my own mother.” Word of S. Victoria’s charities often spread so rapidly that her visits are prolonged so that she can continue to treat her patients. In her most recent visit, S. Victoria planned on treating at most 400 patients, but over 600 people sought her help. She offered them the little help that she could because of her supply deficiency, but plans on being able to accommodate more patients during her next visit.

Through her 12-hour shifts, S. Victoria shares new ways that the people of these villages can use the water that they have and, through a suitable budget, can be used to its maximum efficiency. Part of the process of preserving health is taking measures to become more hygienic as this can sometimes be the best way to fend off bacteria and diseases. S. Victoria also offers her most solemn prayers to those that she has treated. She says, “I will continue with them in prayers, but I tell them to have faith in God, in yourself and in the process.”