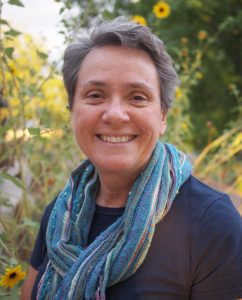 S. Janet Gildea died April 4, 2019, at the age of 62 in the Sisters of Charity community home in Anthony, New Mexico. She valiantly endured metastatic ovarian cancer for 11 years. S. Janet was born on Sept. 11, 1956, to Eugene and Carol (Suelzer) Gildea in Fort Wayne, Indiana. She was one of six children. She was a Sister of Charity for 36 years.

S. Janet grew up as part of an active family of faith in Fort Wayne; her family attended St. Henry parish and she graduated from Bishop Luers High School in 1974. She first met the Sisters of Charity when attending the College of Mount St. Joseph (Cincinnati, Ohio) in 1974. During her years at the Mount she experienced the hospitality of the Sisters in sharing opportunities for spiritual growth and friendship while also discerning God’s call. The call was to continue her studies in preparation for service as a physician, but hand-in-hand came the invitation to vowed life as a Sister of Charity. S. Janet entered the Congregation in 1982.

S. Janet earned a Bachelor of Science in biology from the College of Mount St. Joseph in 1978 and graduated from Indiana University’s School of Medicine (Indianapolis, Indiana) in 1982.

S. Janet’s ministries included 35 years of medical service to the poor in Kentucky, New Mexico, Texas and a colonia in Anapra, Mexico; she would term it ‘poverty medicine’ because she preferred working in clinics for the poor in underserved communities. She began her family practice residency in 1982 at St. Elizabeth Medical Center in Covington, Kentucky. In 1986 she headed to Santa Fe, New Mexico, working part-time at both Villa Therese Clinic and a federally funded clinic for medically needy families. In 1991 S. Janet became medical director at San Vicente Clinic near El Paso, Texas, and four years later she co-founded La Clinica Guadalupana for families living in desperate poverty on both sides of the U.S.-Mexico border. This ministry expanded to provide much-needed assistance for children with special needs through the Santo Niño Project in Anapra, Mexico. She would remain at the border the remainder of her life, learning from the people about perseverance, courage, creativity and celebration. As S. Janet shared, “They gave me Our Lady of Guadalupe and taught me to experience the Gospel from the perspective of God’s favorite people – the poor. Serving her most beloved children I am learning lessons of compassion, advocacy, accompaniment and radical dependence on God.”

Another aspect of the call to religious life for S. Janet was the desire to help other young women pursue a call to service that could also include a call to vowed life. She joined the Sisters of Charity Vocation Team, and in 2007 she was instrumental in the development of a vocation video to expand outreach. She gave much of her energy to encouraging vocations, serving as director of initial formation for the Sisters of Charity Congregation. She was a National Religious Vocation Conference member, shared her vocation story on her blog, Each Day Counts, and was a frequent writer/contributor for Global Sisters Report.She also served as the El Paso Diocesan Liaison for Women Religious.

S. Janet saw great value in the outreach-service component that young people offer the world in their desire to make it a better place. To add to their contributions she and initial formation/vocation teams in the Sisters of Charity Federation conducted a study, requesting a grant from the Catholic Volunteer Network for a program for young women returning from volunteer mission experiences after college. The program offers participants the opportunity to live in community, receive spiritual direction, career and individual counseling, and take time to discern the ‘what to do next’ with their lives. Known as AVE (After Volunteer Experience), the opportunity is offered to young women transitioning from a year of volunteer service at Casa Caridad in Anthony, New Mexico, Sister Janet’s home community. It has proven to fill a void for these young women and provides a reflective time for direction and relationship building in a trusting environment.

John E. Burger of the Missionary Society of St. Columban shared the following remembrance, “S. Janet was a teacher, a healer and, as many of us know, an incredible cook. For years whatever Columbans were at the border enjoyed wonderful Christmas and Easter meals at Casa Caridad. S. Janet will be missed by many but her spirit clearly lives on in her community and all of us who knew and loved and worked with and broke bread with this woman of profound faith.”

For her Sisters and those who knew her best, S. Janet’s own words speak of the woman she was and the passion she felt for religious life today: “There are so many needs for which religious women are uniquely positioned to respond. For those who desire to serve Jesus in the poor, to deepen their relationship with God and to live in a community of faith, being a Sister of Charity is a wonderful option and a great adventure.”