In the mid-1960s, the Catholic Church was experiencing great change since the Second Vatican Council. As the world experienced the turn of the millennia, so, too, did it encounter issues of repressed societies and persons due to communism and the fallout of the Cold War. With the change brought about by the Second Vatican Council still fresh in the memories of clergy and laypeople across the globe, the National Conference of Catholic Bishops sought to spread the teachings of this transitional period to those that were isolated by their governments or persecuted for their religious beliefs. They sought the help of the Leadership Conference of Women Religious, or LCWR, to find willing women religious to minister in Central and Eastern Europe after the fall of communism in 1995. The Sisters of Charity of Cincinnati were one of the many congregations that answered the call.

This article is the first in a series featuring Sisters of Charity who responded to the call to minister in Europe and who worked to combat the systemic injustices that were inflicted by the government on its citizens. We begin with S. Donna Steffen in Lithuania. 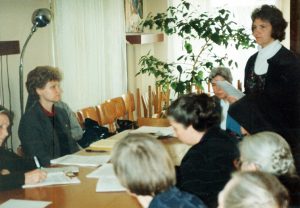 S. Donna Steffen (standing) made several visits to Lithuania, each with a different ministry ranging from teaching to assessing the needs of each congregation.

When LCWR put out a nation-wide advertisement requesting religious women to serve in Europe, S. Donna Steffen applied and was appointed to her place of service: Lithuania. She was initially worried because there were no established contacts in this area. Luckily, S. Donna was paired with a Sister from another congregation that had relatives in Lithuania.

During her visits, S. Donna witnessed some of the inhuman effects that communism had on the citizens of Lithuania. For example, her companion had relatives where indoor plumbing was a fantasy; the closest thing to an indoor toilet was a hole in the floor at a hotel. Conditions were so poor that a newlywed couple from Siauliai couldn’t afford to live on their own and were forced to build another level to their family’s apartment. This was the apartment where S. Donna would stay during her visit, but found that their hosts were gracious for what they had.

Upon arriving, S. Donna discovered that the Soviet Union had barred the country’s link to the Catholic Church. As such, congregations of the country had not heard about the revisions of Vatican II because they were forced underground by an iron-fisted nation. During her first visit, Sister’s task was to assess the needs of these congregations. Many of the Sisters still followed a strict horarium and wore their habits. But the traditional ethos that these Sisters followed reached beyond their apparel and schedule. 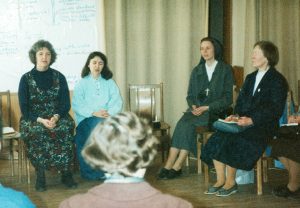 In order to connect with the Sisters, S. Donna Steffen (left) would sing with the other Lithuanian Sisters in Latin.

Because of the prisons implicated on their minds, the Lithuanian Sisters were inundated with their newfound spiritual freedom and open thought that Vatican II encouraged. In a society where these women religious only knew the company of nightmares and depression, they were willing to accept these new teachings with open arms. S. Donna specifically noted the resilient human spirit that these people had to endure their time under communism. Their gratitude moved her to make two additional trips where she would lead retreats. Because she wasn’t familiar with the language, Sister began singing in Latin with the retreatants to help them learn about Scripture and the Sacraments. “There’s a gift in being able to share what we take for granted. It’s something that you carry in you,” she says.

The music of each service provided a common language for S. Donna to share with these Sisters and allowed them to pray with a united spirit. It had a profound impact on S. Donna, especially during a particular organ recital of sacred music in St. Casimir Church. At this recital, S. Donna realized that many of the Lithuanian people were hearing this music for the first time. These moments encouraged her to minister in Lithuania twice after her first visit where she met with women religious and other catechists for the same service. 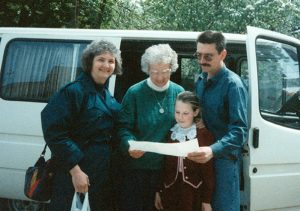 In order to connect with the Sisters, S. Donna Steffen (left) would sing with the other Lithuanian Sisters in Latin.

Sister carries the memory of her service with her, but she also brought with her a physical reminder. S. Donna helped the couple from Siauliai come into the United States so that they could earn money for their family. With their presence in America, she remembers to treat others with the same compassion that the people of Lithuania showed her in her service. She stresses that this compassion and graciousness should be apparent in the ministries of all people.