In 1995, the United States Conference of Catholic Bishops sought the help of women religious with their intended goal of religious expansion and education on Vatican II. Poland, Belarus, Lithuania, Armenia and Georgia were among the many countries that the Sisters of Charity served. As the Sisters ventured to Central and Eastern Europe to spread their mission of peace and love on a global scale, Sisters Teresa Dutcher, Montiel Rosenthal, Donna Steffen, Juanita Marie Gonzales, Mary Joyce Richter, Judith Metz, Mary Caroline Marchal and Mary Gallagher experienced firsthand the sincerity of the human spirit that transcends the oppression of violence, poverty and tyrannical rule. The following article is the second in our series featuring those Sisters of Charity who responded to the call.

When the Community requested the assistance of Sisters in the Congregation to visit Central and Eastern Europe, S. Montiel Rosenthal, eager to be of service in whatever way was appropriate, responded. S. Montiel used her skills as a healthcare professional to teach congregations of these areas how to be of service to their community, as a model of Christian service. They lived in areas that mostly had no access to private, government or international medical aid. Her primary mode of service was teaching young adults of the villages about basic healthcare. She was also tasked to take note of any signs or stories of human rights violations that she encountered.

Of these violations, a poignant reminder of the brutality under communism was the criminalization of religious expression in any form. Even a child saying, “Daddy has a cross in his closet” could result in someone being imprisoned, tortured, murdered or shipped to Siberia. S. Montiel was even informed that undergraduate students in universities had to successfully pass a course on atheism.

Her passage into Armenia set the tone for what her new sight of service would be like. When she first entered the country, she passed armed guards with only an Armenian flag and her belongings. S. Montiel’s first week was at a “resort,” where both the water and power were sporadic. Not only were her living conditions subpar, but so were the medical treatments that were available to the country’s citizens. She was tasked with teaching teenagers and young adults from the villages how to apply first aid and provide basic healthcare. When she first entered the Republic of Georgia, she passed armed guards with one of the Armenian Sisters presenting the border guards with only a rosary and an Armenian flag. 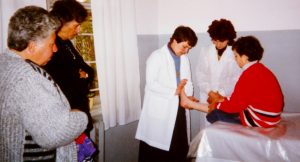 While ministering in Armenia, S. Montiel Rosenthal (center) focused on treating handicapped children and adults in an attempt to remove the stigma held against them.

“My firm conviction was that handicapped Armenians would evangelize Armenia,” S. Montiel says. Through her ministries, she attempted to remove the stigma held against the handicapped. Other members of the community that she served questioned her, asking why she would want to treat these “creatures.” By the end of her service, these same people said to her, “Thank you for bringing the children here. They’ve taught us what it means to be truly Christian.”

Montiel has kept in contact with the people that she served, who have helped found institutions to share what they had learned from her. Stressing the importance of international contacts, S. Montiel says that teaching Family Medicine has created a deep interest in training healthcare professionals to look for medicinal alternatives to treat their patients who have limited resources. It has also encouraged her to continue to practice Family Medicine for those without the luxuries that some have. In addition, S. Montiel has offered her services to the underprivileged back-siders who work behind-the-scenes at Belterra Park in Cincinnati during the horseraces. Severely underpaid with little opportunities for healthcare, this is just one example of how S. Montiel has immersed herself into her ministry to serve those who have no resources much like the people of Armenia and Georgia.