In 1995, the United States Conference of Catholic Bishops sought the help of women religious with their intended goal of religious expansion and education on Vatican II. Poland, Belarus, Lithuania, Armenia and Georgia were among the many countries that the Sisters of Charity served. As the Sisters ventured to Central and Eastern Europe to spread their mission of peace and love on a global scale, they experienced firsthand the sincerity of the human spirit that transcends the oppression of violence, poverty and tyrannical rule. The following article is a continuation in our series featuring Sisters who responded to this call. 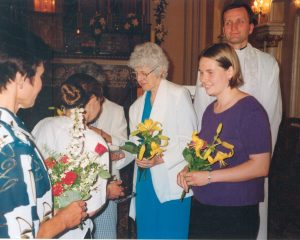 S. Laetitia Slusser (third from the right) received a floral thank you from her Latvian religious education students before she returned home.

In 1999, the opportunity arose again for Sisters to travel to Central and Eastern Europe, an offer which S. Laetitia Slusser responded to with a selfless spirit. S. Mary Gallagher, who had ministered in Poland in a prior mission, accepted the offer as well because she wanted to provide more of her ministries for the people behind the Iron Curtain. Tasked with teaching religious education, their service lasted one month and consisted of acquainting the various religious and lay people about the charism and teachings of Vatican II, an experience that S. Laetitia could only describe as “exhilarating.

Laetitia recalls with a warm heart how the laity in Latvia were willing to learn with an open mind and remembers her friendship with her translator, Liga, a generous native Latvian. Through her help, the students were able to pay avid attention and furiously scribbled down each word that the Sisters would say through Liga. Due to an overwhelming desire to learn, the weekends would also be a time of education for the students as Sisters Mary and Laetitia led retreats for the many who wanted to participate.

Helping a new generation of religious learn about the creed of the Church and different prayers rejuvenated S. Laetitia’s faith, as their uplifting optimism despite many harsh decades eased them through their trials. Because of the trust built between the class and the Sisters, the classroom was the only place that the students could talk about their traumatic memories. S. Laetitia says, “Their stories were very to the surface, so sometimes we paused what we had planned to let them speak.”

The Church’s reemergence from an underground setting due to the oppression of communism came with the promise of a bright future filled with open prayer and expression. S. Laetitia says that the weather was always sunny during her visit, which she likened to the mood of the people that she served as they were always vibrant and joyful. S. Mary was moved by the cheerful disposition of these people despite the years of tyranny that they lived under.

During their final days in Latvia, Sisters Mary and Laetitia handed out Bibles to all of their students, who were in tears by the time they had returned to their seats. For the first time in their lives, the students had a Bible in their native language. As the Sisters of Charity parted, the students delivered their own gift: a bouquet of flowers that could hardly be contained in a pew of their Church. For both of the Sisters, leaving Latvia was an occasion that reflected the friendships built during their time, a time filled with tears as well as joy for a bright future that the lay leaders would see to with their new knowledge of an inclusive Church.

When they reflect on their time, Sisters Mary and Laetitia remember to use the same enthusiasm in their current ministries that the religious of Latvia showed them. Seeing the catechists become so lively at the sight of opportunity to learn, despite being subjected to such injustices for a long period of time, encouraged the Sisters of Charity to carry on with the same high-spirits in their later ministries with graciousness.