In the Spirit of Charity 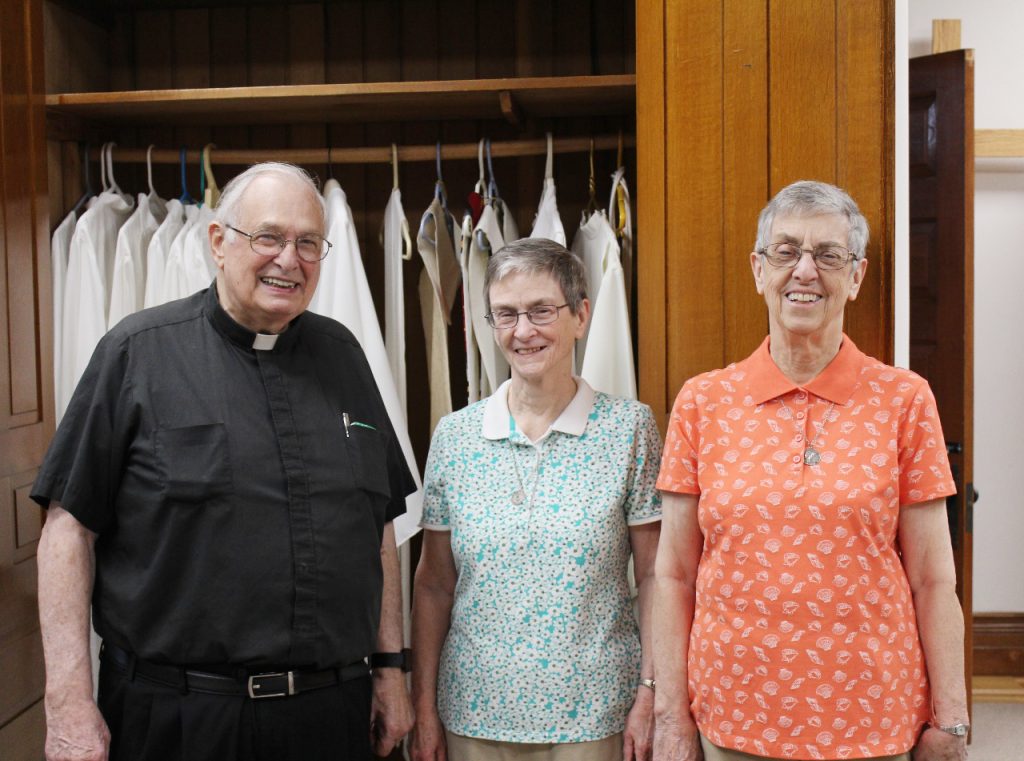 Father Dennis Dettenwanger is a familiar face around the Motherhouse campus, one that brings a smile upon every Sister of Charity’s face who sees him. He has become a celebrated presence among the Sisters and was even named the King of Mardi Gras in 2019, but his experience with the Congregation runs much deeper than that. With such a rich history with the Sisters of Charity, his dedication to the Community is one that is rooted in spirituality and friendship.

Fr. Dennis recalls being close to the Sisters all of his life, as they have had a presence in his education since he was in the seventh grade at St. Raphael’s School in Springfield, Ohio. He lovingly remembers all of the Sisters that had an impact on his formative years, including the ones who first mentioned priesthood to him, Sisters Jerome and Gabriel. They asked if he would consider becoming a priest after they noticed his exceptional performance in religion class. After further contemplation, Fr. Dennis decided that his life would be one of vocation and has been fulfilling this vocation since 1964.

In 2010, Fr. Dennis was invited to say Mass for the Sisters of Charity, a responsibility which he resoundingly accepted. With this new responsibility came friends new and old. Among his many friends in the Congregation, Sisters Marie Irene and Mary Dolores Schneider have worked the closest with Fr. Dennis. He first met the Schneider sisters at Seton High School, Cincinnati, where he taught various religion classes, such as Liturgical Art, for 13 years. At one point, he even led the religion department of the school.

This time nurtured the friendship and the faith between the Schneider sisters that can be seen in some of their earliest encounters with him. “The Sisters of Charity that ministered at Seton had a morning prayer before classes and he asked if he could join us just to be in spirit with us,” S. Marie Irene explains.

This began a mutually fulfilling friendship between Fr. Dennis and the two Sisters of Charity. When he came to the Motherhouse, he found that his two close friends would be preparing the sacristy before Mass. However, the Sisters note his constant humility. “He comes in and he works around us,” S. Mary Dolores says. “He meets the needs of the Sisters.”

Faith plays an integral role in his relationship with the Sisters as he is willing to listen and answer questions following his services. Fr. Dennis says Mass four times a week at the Motherhouse and is happy to share his faith with the Congregation that taught him about his faith. Some of his fondest memories, he says, are celebrating the liturgies with the Sisters. “It’s always a pleasure to say Mass for them because they are so prayerful,” he says.

For as many Sisters of Charity that took part in building Fr. Dennis’ faith, he has made equally as many friends among the Sisters as an adult. Fr. Dennis says that his life has been blessed by the Sisters of Charity and hopes that he can reciprocate all of the good that they have done for him. But, according to the Schneider sisters, he has far exceeded them through his services especially in celebrating Mass.

can offer. They both learned, however, that freedom is not fully appreciated until you see someone who does not have it. S. Joyce says, “There’s a whole world that I have not experienced that I don’t know unless I listen, talk and lead with others.”