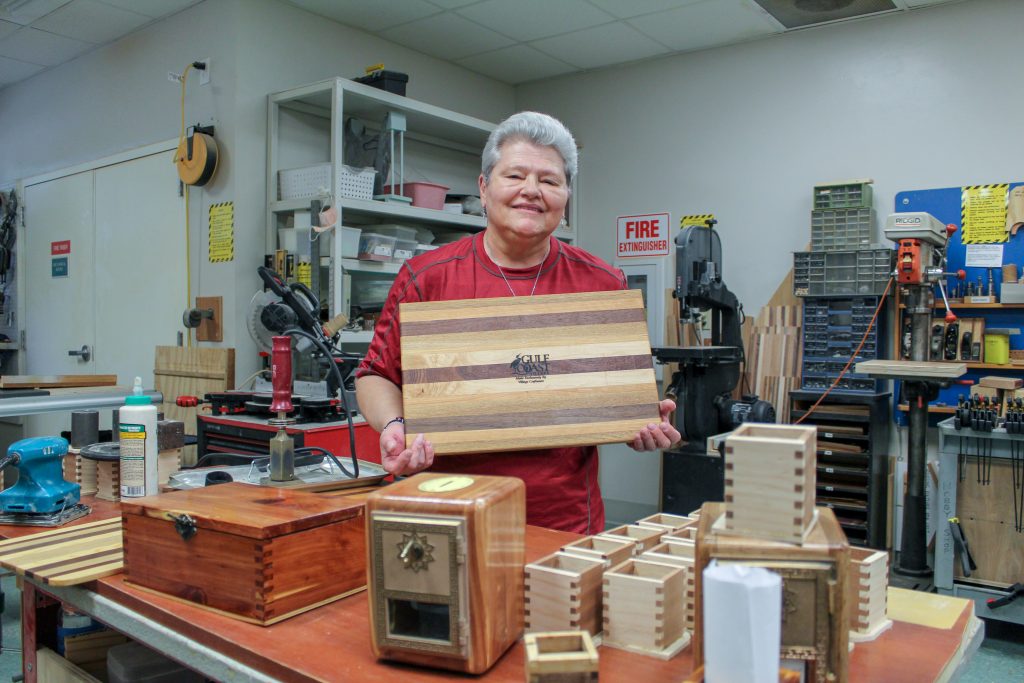 The craft of woodworking has been around since the beginning of time, but for Sister of Charity Diana Bode, the hobby has only just recently enlightened her life. Her retirement opened the doors of opportunity for her to fulfill a life-long dream of woodworking, but she did not expect that she would be able to give back to her community and nurture her prayer life like she has for more than a year.

Diana has always had a creative mindset, engaging in various writing projects, but woodworking had interested her from a young age. After writing a poem for one of her friends, S. Diana was asked if she could burn the poem onto a piece of wood. This only made her more curious about the art of woodworking and wood-burning. However, it wasn’t until her adulthood that she was finally given the opportunity to pursue it. Before she lived in Gulf Coast Village in Cape Coral, Florida, she attended a marketing event for those considering retirement. At this event she met Bill Djerf, who was on a resident panel and was noted for his skills in woodworking. S. Diana recalls him saying that if she ever came to live there, he would teach her. In May 2018, S. Diana began to fulfill her interests when she moved into the community.

The woodworking shop, which began as a hobby room, has become a place where S. Diana spends most of her time. The atmosphere of the shop is complete with the smell of the wood that permeates the air and the company that she keeps, two of her favorite qualities of the place. Bill has acted as her patient mentor throughout her time in woodworking, teaching her little-by-little at a pace that is mutually beneficial. “He’s been extremely patient and he makes sure that I understand the different tools and skills,” she says. 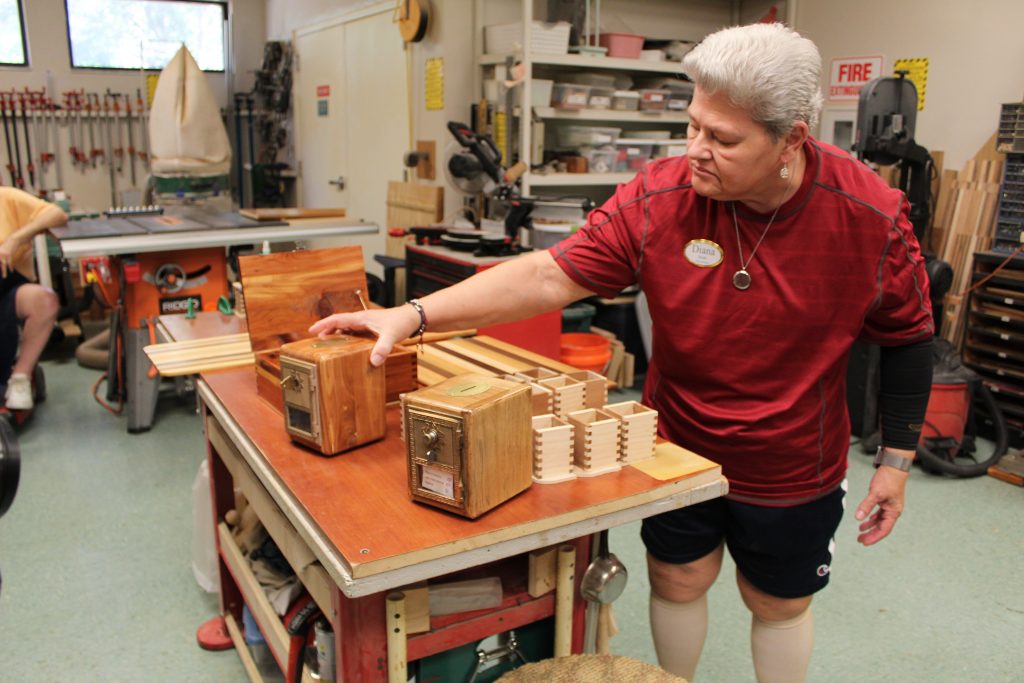 Wooden coin banks are among the many items that S. Diana has recently added to her repertoire. Photo courtesy of Gulf Coast Village.

Because of his mentorship, S. Diana has created a variety of items, such as pencil boxes, wooden coin boxes, cutting boards and even a thread-holder of her own design that can hold up to 48 spools of thread. The shop has even been able to create gifts for relatives of the residents, such as a baseball shelf for grandchildren. However, her favorite projects are the ones that take her out of her comfort zone by requiring new tools and techniques. S. Diana has been a part of making so many projects that Gulf Coast Village’s workshop has its own brand on each of their items. Through their efforts, they are able to sell some of these items to the other residents of the village.

According to S. Diana, the art of woodworking offers a unique way for her to preserve the earth by using the gifts of God to make something beautiful. In addition, S. Diana says that the practice of woodworking is akin to a private reflection for her. “There’s been such an emphasis on working and caring for the Earth,” she says, “I feel like I’m doing that with the useful tools that I create for others and by acknowledging the beauty of the things that come from the Earth.”

By creating useful tools from God’s creation, S. Diana is ensuring that these gifts of creation will be preserved. Like her own creations, S. Diana hopes that this skill will last a long time, adapting to new projects and learning as much as possible about her new craft. Now equipped with the proper tools and companions at Gulf Coast Village, S. Diana now thinks of woodworking as a way to give back to the community that taught her this new skill.