Music From the Heart 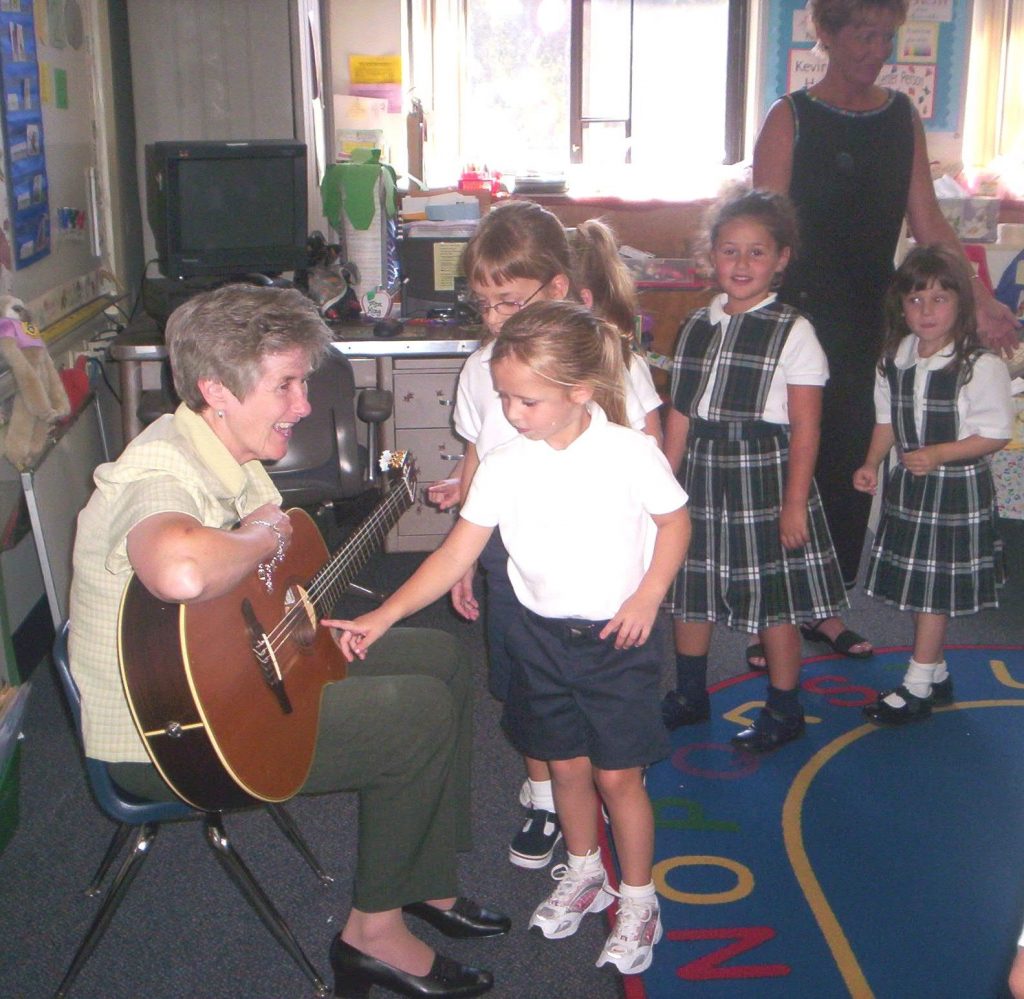 Throughout her 40 years in education, S. Karen Hawver taught the joy of singing and music to her students.

One way to meet S. Karen Hawver is to catch her singing. S. Karen is a 76-year-old retired Sister of Charity and could be called a veritable ‘Minstrel of Song.’ Her favorite song of all time is “Thank You for the Music,” written and recorded by ABBA, and part of the stage play “Mamma Mia.” She says, “It is the story of my life.” The first two lines of the second verse are: “Mother says I was a dancer before I could walk. Oh yes, she says I began to sing long before I could talk.” S. Karen agrees, “I always felt like I could sing and dance long before I could walk or talk.”

The following interview takes a deeper look into S. Karen’s love for music and the joy it brings her and others.

Where did your love for music come from?

I grew up in Springfield, Ohio, in a very musical family. We never knew anything about notes or rhythms, we just loved music! My mom would buy records on occasion. My sister, Leah, and I would sing constantly while doing the dinner dishes. Our dad loved to hear us sing.

I sang at school a lot. My eighth grade teacher didn’t have a voice so she would always ask me to start a song. After I entered the Sisters of Charity, I was part of our Sisters’ choir and I sang a few solos with that group as we entertained for picnics and visitors. I was missioned to serve as an elementary teacher and principal over the next 40 years in several schools. I remember when I was stationed at St. Sebastian School in Chicago, Illinois, during the late 1960s, there was a terrible blizzard and we were out of school for an entire week. I had seen an old dusty guitar in the attic and decided to try to play it. I taught myself chords and notes on that guitar and began playing it while I taught my fifth graders to sing in music class. … 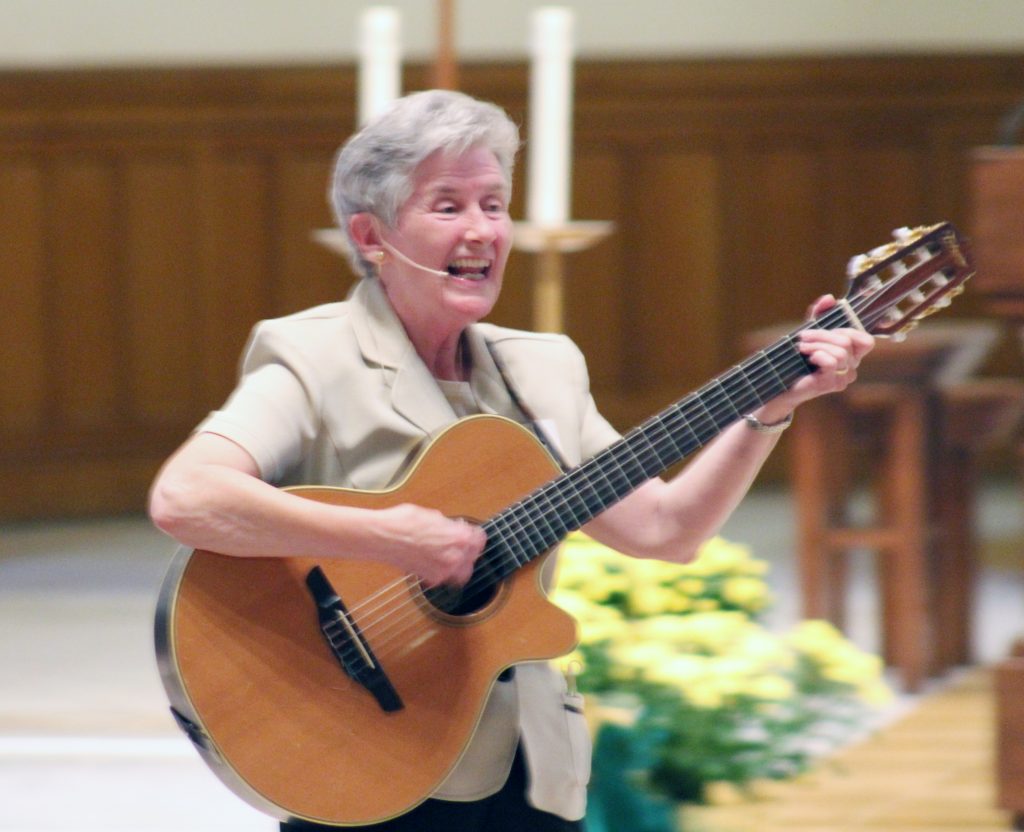 S. Karen Hawver’s love and joy related to music can be felt by all who know her.

In the early 1980s while principal of Holy Family Regional School in Rochester, Michigan, I decided to begin a choir for eighth graders to try to improve upon the singing at liturgies. Classroom music wasn’t their favorite thing and the first response from the students when I put out the invitation to join was a grand total of three girls. I worked for several years as the eighth grade music teacher and the choir grew slowly. It finally became the ‘in’ thing to do when a few of the football players decided to join – suddenly everyone wanted to be a choir member. For several years during Catholic Schools Week, the teachers and I took that choir to Sacred Heart Cathedral to lead the singing for the entire Archdiocesan School System liturgy.

I can truly say that I love to teach singing to children. I tried to teach them only songs with good messages that carry lessons; ones they would enjoy and made them sound good. It’s just who I am and I think I was created to pass that love of music to others.

Another musical outlet opened up while I was visiting St. Joseph Hospital in Mount Clemens, Michigan. I met a young doctor who was very ill with spinal meningitis, and was a patient. One of the Sisters on staff asked me to sing for the doctor. Also, on that same day, a nurse asked me to sing for her wedding. Thus began my long career of singing for weddings and funerals. I continue that ministry even today.

What does music bring out of you?

To me, music brings out every emotion I ever have. It seems that for everything that happens in my life, there is a song that captures it exactly. I began to realize that I was singing a certain song when I was feeling a certain way. For example, when my father died in the late 1970s, I found myself singing, “Tomorrow,” from the stage play “Annie.” The words: “The sun’ll come out tomorrow, bet your bottom dollar that tomorrow, there’ll be sun. Just thinking about tomorrow clears away the cobwebs and the sorrow till there’s none.” I sang to myself over and over and it gave me the hope I needed to go on. Actually, if things aren’t going well, I can choose to sing a song in my heart that lets me know things don’t have to remain that way for me. I can pull myself out of thinking depressing thoughts, just by thinking of a song.

How does the ministry of music continue to be part of your calling?

Since music is part of my soul, it continues to be with me every day in so many ways. When I meet families who have been part of my teaching in the past, they will always ask me if I still have ‘Joyful’ or ‘Barney.’

Joyful is the name of my guitar. The families at Holy Family Regional, my final school, gave me a guitar in the early 1990s because my other one was old and scratched. I held a contest in the school to name her. An eighth grade boy named her ‘Full of Joy’ and a kindergarten girl entered the name ‘Joy.’ I decided to name her ‘Joyful’ and took both students to lunch for being the winners of the contest.

Barney was the name I gave to my banjo which I had received from a friend while teaching. The younger students identified with those instruments and the kindergarteners used to talk to them and I talked back through those instruments.

I received a master’s degree in counseling from DePaul University in Chicago, Illinois, in 1974. For my final project, I designed a series of classes which I taught to PTG and PTA groups of parents, nursery school parents and the Michigan Chapter of Parents of Twins all throughout Michigan and Ohio for many years. The final class was focused on how a parent could be happy in the midst of screaming children and confusion in the home. I taught the parents how to sing through the confusion, and always brought Joyful along to help me as I closed the class with a sing-a-long.

At Christmas, I frequently conduct sing-a-longs for families, groups, anyone who would like to sing a few carols, and Joyful accompanies me. Just last Christmas I taught classes to unwed, homeless, pregnant teenage girls and sang carols with the young ladies at the end.
My ministry of being available to families and groups of adults usually contains singing and seems to be welcomed wherever I go. Since music is always with me, I would say my life is a series of songs, for a song is who I am. 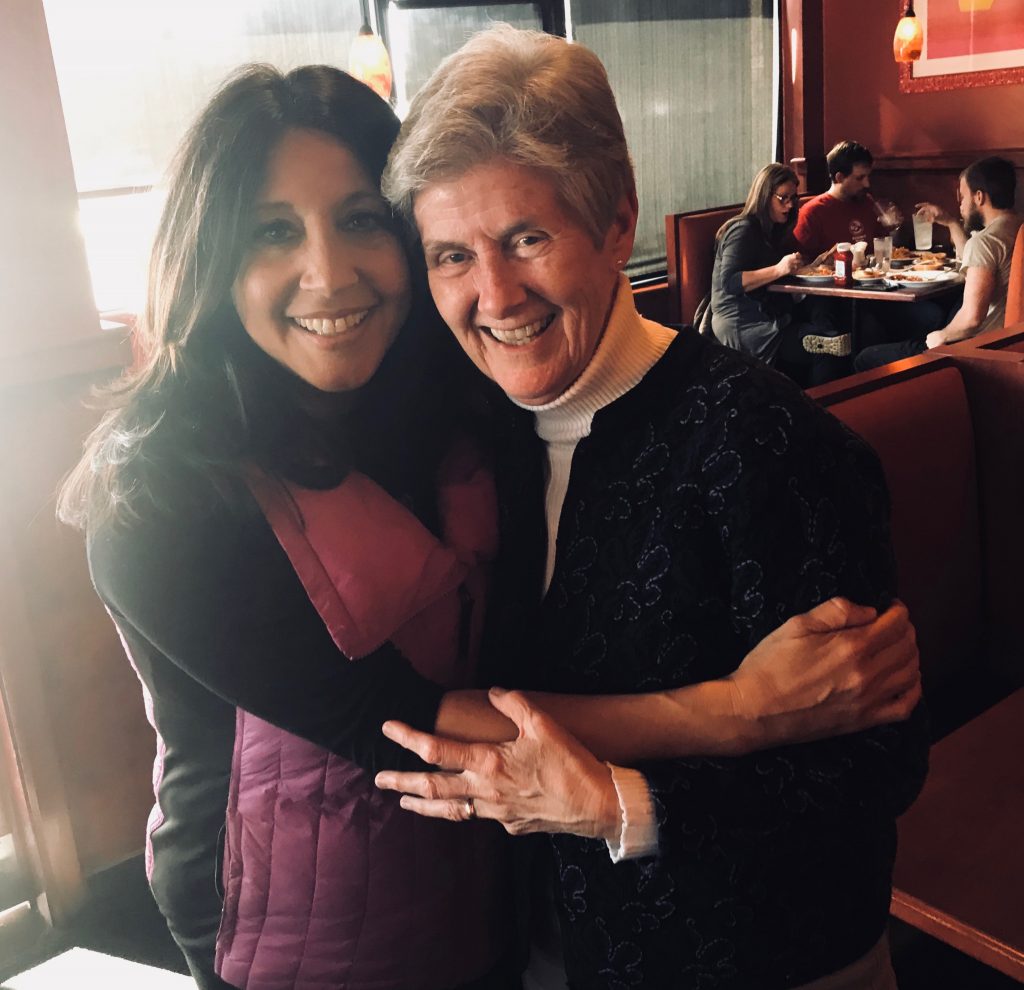 Jeanette Izzi (left) says S. Karen Hawver’s friendship and presence in her life has been a gift.

Throughout her 40-plus years in education, S. Karen Hawver has touched many students’ and parents’ lives with her music and joyful presence. The following is written by Jeanette Izzi, a mother of one of S. Karen’s students at Holy Family Regional School in Rochester, Michigan.

“I met S. Karen 15 years ago when my son Mario started kindergarten. I watched the way she interacted with others and hoped that one day she would know my name and the names of my children as she knew everyone she passed in the school hallway. She was so loved and respected by the entire school community. In no time at all, S. Karen and I became acquainted with one another through my volunteer positions within the school.

“In July 2017 my mother was in the end state of her life. I reached out to S. Karen to ask her to come bless my mom and pray with us. I will never forget S. Karen playing Louis Armstrong’s, ‘What a Wonderful World,’ while my mother lie in bed, tears rolling down her cheeks, looking at me saying, ‘Thank you so much for bringing her here!’ My mother slipped into a coma and died a few days later, but I know her heart was filled with joy from the special time we spent with S. Karen.

“For me, there is no better feeling than knowing I can pick up the phone and reach out to S. Karen and she responds. No matter the task, she offers to help. She reaches out to friends in need of prayer and most recently rearranged her schedule on Christmas Eve to be able to sing at my father’s funeral. It was an unexpected death and the shock alone had me in such grief. It was unimaginable that we were going to bury Dad on Christmas Eve, but somehow God gave me the strength I needed, and hearing S. Karen’s voice managed to comfort me and give my entire family peace.

“We feel so blessed to have this holy woman so close to us! S. Karen is a true disciple of Christ. She uses her gifts to comfort and encourage others. Her voice is so beautiful and brings such a soothing touch to my soul! I feel God’s presence when she is near me. She has brought me closer to God and she has brought my family closer to God. I am grateful for S. Karen, a true blessing to my life!”