Variety Show: Sisters of Charity Unwind and Show Their Talents

On June 16, 2019, Sisters of Charity in Mother Margaret Hall took a moment from their tradition of selfless service to host a variety show displaying the many talents of the Community. The event was a success with high attendance and a wide assortment of acts that built new relationships and nurtured the sense of community that the Sisters have come to know and love.

The idea for a variety show came when Tracy Logan, Mother Margaret Hall administrator for the Sisters of Charity, wanted to branch out and try new things within the Community. Bill Owen, activities director, said that the variety show was an effort to encourage Sisters to get out of their comfort zone. “Tracy wants to take the Sisters in new directions so that they can build a stronger community,” he said. 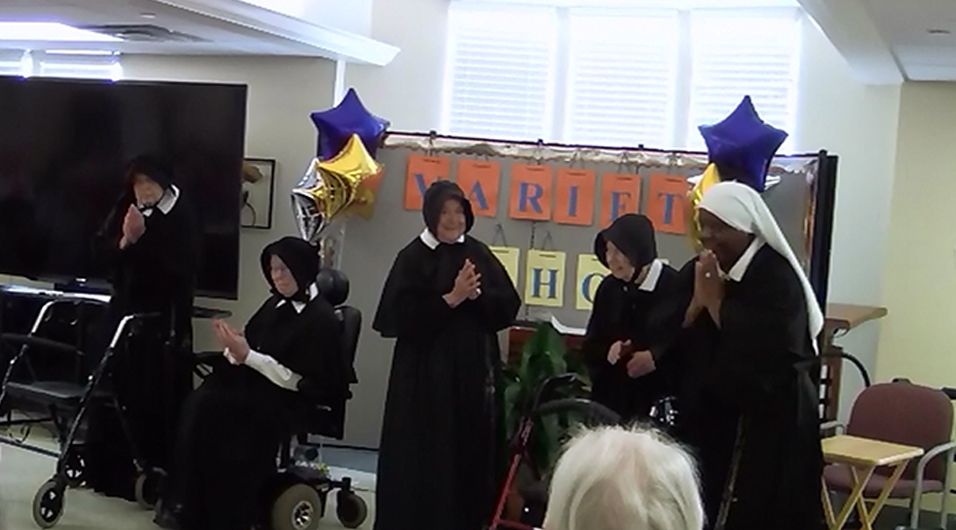 After borrowing habits from Archives, the Sisters were able to perform a song from the movie Sister Act.

The event took place in the Mother Margaret Hall Community Room on the third floor and boasted nine acts. The hour-long show featured several musical numbers and dances from the Sisters. In addition to these melodic acts, there was a poem-reading by S. Ann Hunt and a skit recreating a scene from the 1992 film Sister Act. In order to make the scene more enjoyable, the Sisters even dressed up in habits that they received from Archives.

The Sisters graciously invited members of the campus staff, such as Beverly Anderson from Activities and Sean Carlock from Maintenance, to participate in the event as well. Tracy herself sang for the event twice and Bill delivered a heart-felt duet with his friend Sean, though he did admit to being nervous prior to their performance of “The Bird” by The Time. Staff even accompanied Sisters in a few of the acts, including a performance of “Put on a Happy Face” from the musical “Bye Bye Birdie.” 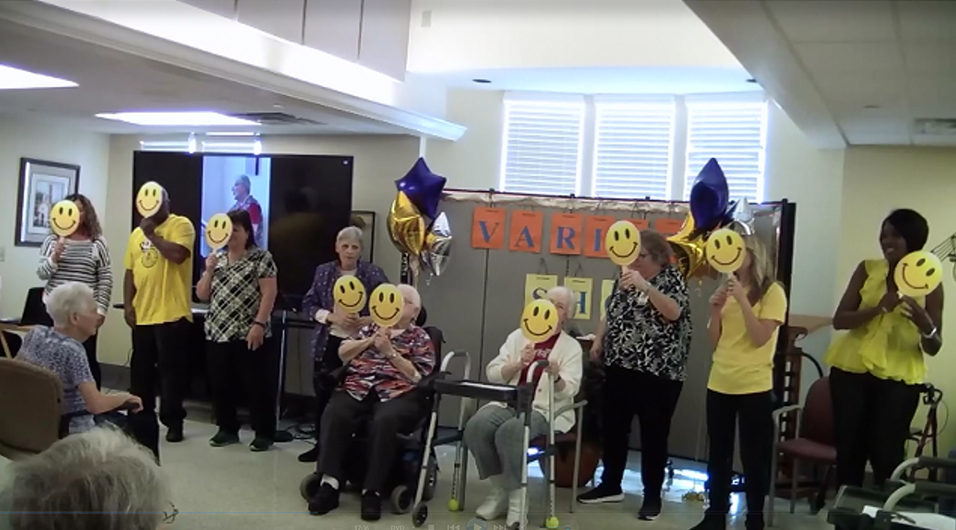 Mother Margaret Hall staff joined in the fun during one act where the performers sang “Put on a Happy Face.”

Attendee S. Thelma Schlomer states that the fun the performing Sisters were having was infectious to the audience. Guests were encouraged to sing along with the acts. S. Thelma added that her favorite part of the event was when S. Shirley Dix performed in a dance number. Setting her walker aside, S. Shirley was happy to perform for her fellow Sisters. “It was a great community-building event,” S. Thelma says.

Because of the impressive turnout and energetic involvement, the variety show is likely to return. The Sisters received rave reviews from their peers and look forward to seeing what other Sisters are capable of in the future.