Time Capsules: Buried Memories to be Unearthed in the 2050s 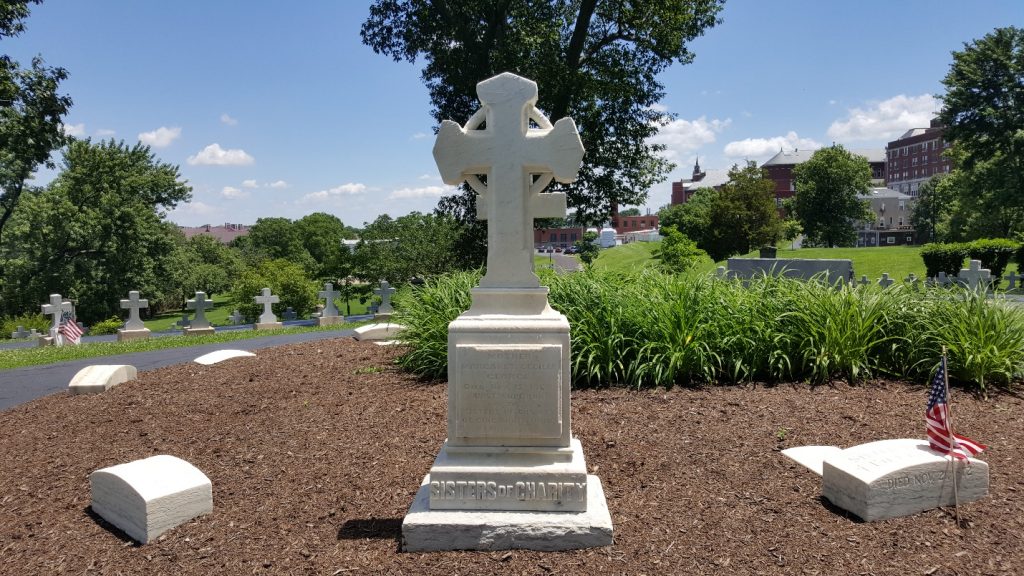 The Mothers’ Circle time capsule is buried behind the grave of Mother Margaret Cecilia George, the founder of the Congregation.

The year 2000 was an exciting time for the Sisters of Charity as it was for the rest of the world; with ideas buzzing about what the new millennium held for the Congregation, the Sisters decided to bury two time capsules for the Sisters yet to come. The future Sisters who discover these items at the midway point of this new millennium will be reminded of their history and their nostalgic and hopeful predecessors.

The turn of the century was rich with opportunity for the Sisters of Charity, but they wanted to stay true to the values upon which they were founded. Because of this, a group of Sisters including S. Mary Ellen Murphy, president of the Community at the time, decided that time capsules would be the best way to remind the future of how far the Community has come. “We wanted to offer a glimpse of the past to the future Sisters,” she says. “There’s an element of joy in time capsules and I think it will encourage the new Sisters to see what our lives were about at the time.” 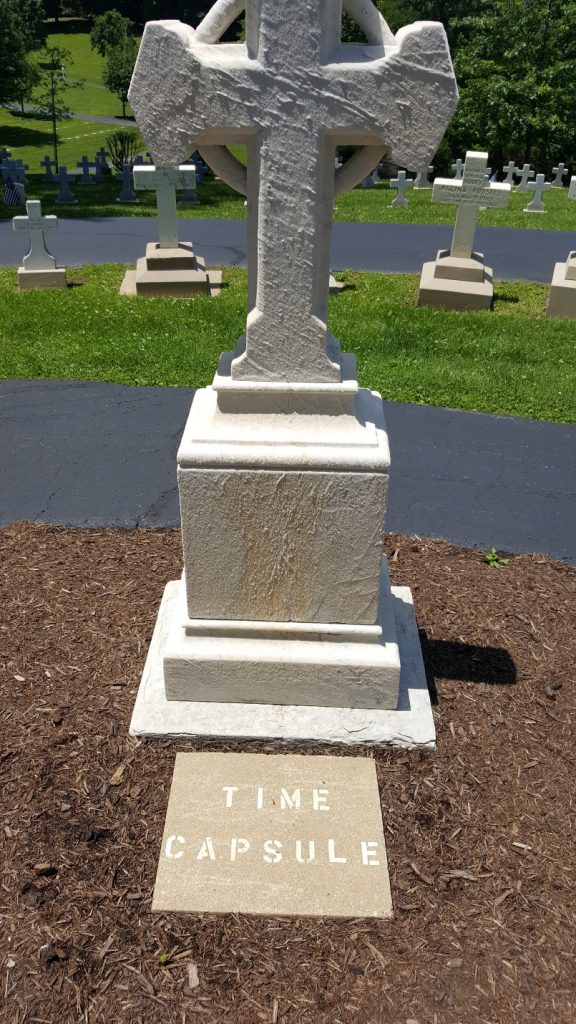 The time capsule buried in Mothers’ Circle is scheduled to be opened in 2052.

In order to preserve the past, the time capsule was filled with various items including a Sisters of Charity pin, pictorial directory, Vision Statement, Chapter Challenges and publications within the Community. Buried on Jan. 10, 2000, in Mothers’ Circle, the capsule will be resurfaced on Jan. 4, 2052, Elizabeth Ann Seton’s Feast Day.

In addition to this time capsule, another was buried in the Downing Garden by deceased Sisters Mildred Inkrot, Ann Winifred Kelley and Rose Edward Simons. A marker of this time capsule requests it to be resurfaced in the year 2050 and it included rosary beads, prayer books, photos and Mother Margaret Hall statistics. According to volume 22 of Intercom in 2000, “The Sisters even recorded for posterity their thoughts on the greatest achievements of the 20th century.”

The unveiling of these items may be a long ways off, but S. Mary Ellen has already witnessed a remarkable change in the time since these capsules were buried. S. Mary Ellen has watched as technology has grown and how the Sisters have been able to evolve with it. “I entered the Congregation in 1960 and I would’ve never guessed it would be what it is today,” she says. “These time capsules replicate that feeling.”

Mary Ellen says that the importance of time capsules can be summarized in one word: connectedness. By burying these items, the Sisters can live on past their time and connect with the Sisters that they may not have met in their lives. S. Mary Ellen believes that the time capsules will show the future Sisters “the shoulders that they will be standing on.” She also says that history presents an opportunity to reflect because looking back to important moments can be a guiding presence when looking forward. “They’ll have a chance to see what we’ve done and they’ll be able to learn from our mistakes,” she says.

Though the time capsules have more than 30 years before they are recovered, the items and memory of those that buried them will live on through their legacy of service. The Sisters hope that the artifacts buried at such a pivotal time will guide those soon-to-be Sisters during the most pivotal times in their lives. 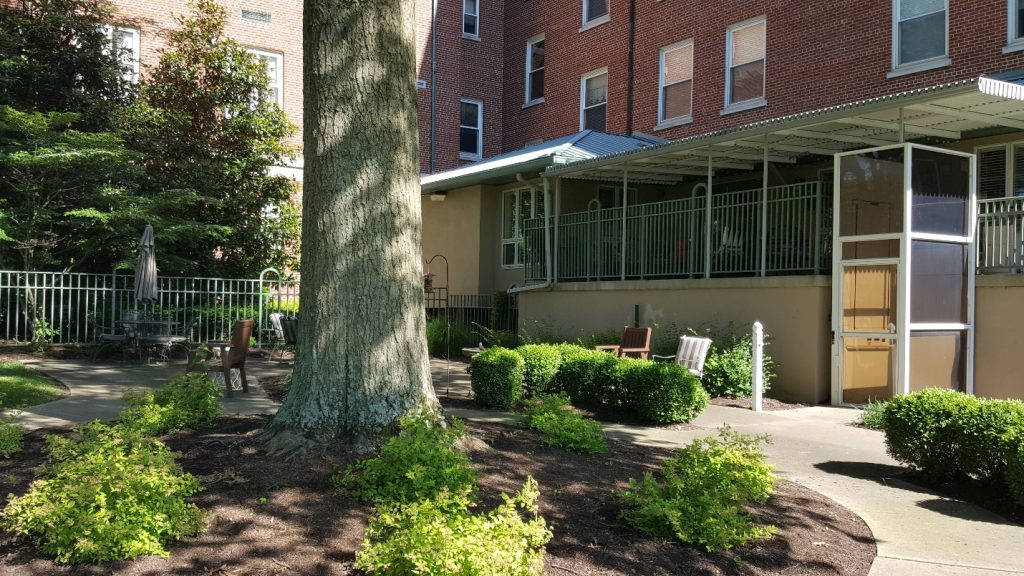 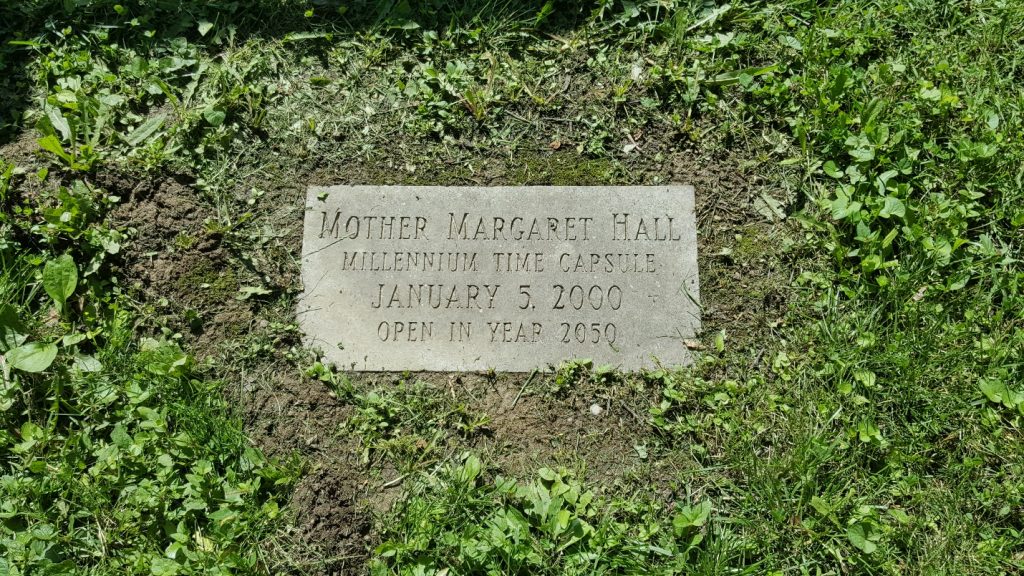 Above is the site of the buried time capsule in the Downing Garden.