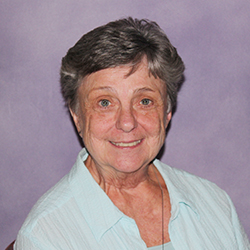 Born and raised in Cincinnati, Ohio, Sister of Charity Suzanne Donovan has had a connection with the Sisters of Charity from an early age. In the third grade, where she was taught by Sisters of Charity at St. Lawrence, her oldest sister, Sister Mary Ann Donovan, entered the Congregation. This was the beginning of her relationship with the Community, making frequent Sunday visits to the Mount St. Joseph Motherhouse. She said, “The spirit of the Sisters was very compelling to me and I knew I wanted to be a part of such a community whose love for one another and those they served was readily apparent.”

“Their commitment to teaching and to the children was obvious as was their care for one another,” Sister said. “In some ways my decision to become a Sister of Charity was simply a following of what was clear in my heart. I knew it was where I belonged.” As a result, Sister made her Perpetual Vows in 1966 after earning her bachelor’s degree in English and education from the College of Mount St. Joseph, now known as Mount St. Joseph University (Cincinnati).

Sister’s first ministry was in Springfield, Ohio, teaching fourth through eighth grade at St. Bernard (1963-’68). She said, “I have often said to the people there in the years since leaving that they truly taught me much more than I gave to their children.” Her ministry as an educator would continue throughout the many schools in Ohio and Kentucky where she taught, and offered her skills as a principal for some of the institutions, including St. Mary in Greenville, Ohio (1969-’72), and Resurrection School in Cincinnati (1972-’75). Sister Suzanne also taught one year at the college level at Thomas More College in Fort Mitchell, Kentucky.

In 1976, Sister became a consultant at Management Designs Inc. in Cincinnati then served as associate director of diocesan planning for the Diocese of Columbus, Ohio. After becoming an associate director of pastoral services in Columbus, she became the executive vice president of Bannon Associates Inc. in Columbus, a consulting firm which advised clients in dioceses, religious communities and nonprofit organizations. In 1991, she accepted a four-year term as councilor for the Sisters of Charity Leadership Council.

The last 12 years of her active ministry, which ended in 2012, were served as the director of human resources for the Diocese of Wilmington, Delaware. During her time, she served as the coordinator of the safe environments education program in alignment with the Charter for the Protection of Children and Young People adopted by the U.S. Conference of Catholic Bishops. She said that her role in teaching, as well as planning, managing, coaching, counseling and administrating, “was all part of what was yet to be as I came to minister in the Diocese of Wilmington.”

Now retired, Sister Suzanne lives in Dayton, Ohio. She said, “I pray that as an individual and member of the community of Charity I will be ever faith-filled, open to possibilities and unafraid of taking the risk of the new.” In light of this, Sister Suzanne is continuing to volunteer her time during her retirement and is a member of several boards of various organizations.