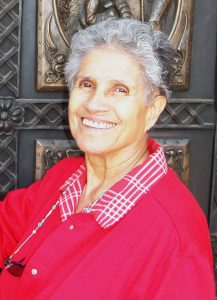 Born and raised in Santa Rita, New Mexico, Sister of Charity of Cincinnati Juanita Marie Gonzales (Margarita S. Gonzales) had no intention of entering religious life; in fact, she wasn’t even an active Catholic. After receiving a letter from St. Vincent Hospital in Santa Fe, New Mexico, about their LPN nursing program, Sister decided to become a nurse like her mother. But while at St. Vincent, she began to attend Mass almost daily and eventually met Sister of Charity Francis Jerome Quinlan, who said, “You are thinking of going to the convent.” Though the thought had entered her mind, she hadn’t told anyone. Shortly after, February 1960, Sister Juanita entered the Sisters of Charity of Cincinnati; she celebrates 60 years with the Community in July.

Sister Juanita’s first ministry took her to Shrine of the Little Flower in Royal Oak, Michigan, as an elementary school teacher for three years. She continued teaching at several schools in Lansing, Michigan, including Holy Cross. After serving at the school in the role of teacher from 1969 until 1977, Sister Juanita was named principal from 1977 until 1995. During this time, she earned her degree in administration from the University of Notre Dame (Notre Dame, Indiana) to better prepare her for this role.

She says that it was while in Lansing that she found great satisfaction working with immigrants. Since few could speak English fluently, Sister Juanita would help them in “fighting their causes.” Oftentimes she was called to the nearby Catholic hospital to interpret for the patients who only spoke and understood Spanish. She also encouraged the immigrant children in the schools to work hard and learn English.

Responding to the call from the United States Conference of Catholic Bishops needing women religious to minister in Central and Eastern Europe, Sister ventured to Poland in 1996. She taught the Sisters there how to read and write English so that they were able to study in other places in Europe. Because these Sisters were behind the Iron Curtain, they lacked any knowledge of Vatican II or how the Church operated in a modern society. Though she was only supposed to be there for one year, she extended her stay to six years to meet the needs of deprived congregations in these areas.

In her spare time Sister Juanita enjoys pottery and photography. She currently serves on boards with the Archdiocese of Santa Fe and Catholic Health Initiatives. Her happiest memories as a Sister of Charity are when everyone is together as a Community. As she looks to the future Sister Juanita says, “[Sisters of Charity founder] Elizabeth Ann Seton’s legacy is the drive that keeps me going to wherever I can be of service to God’s people.”