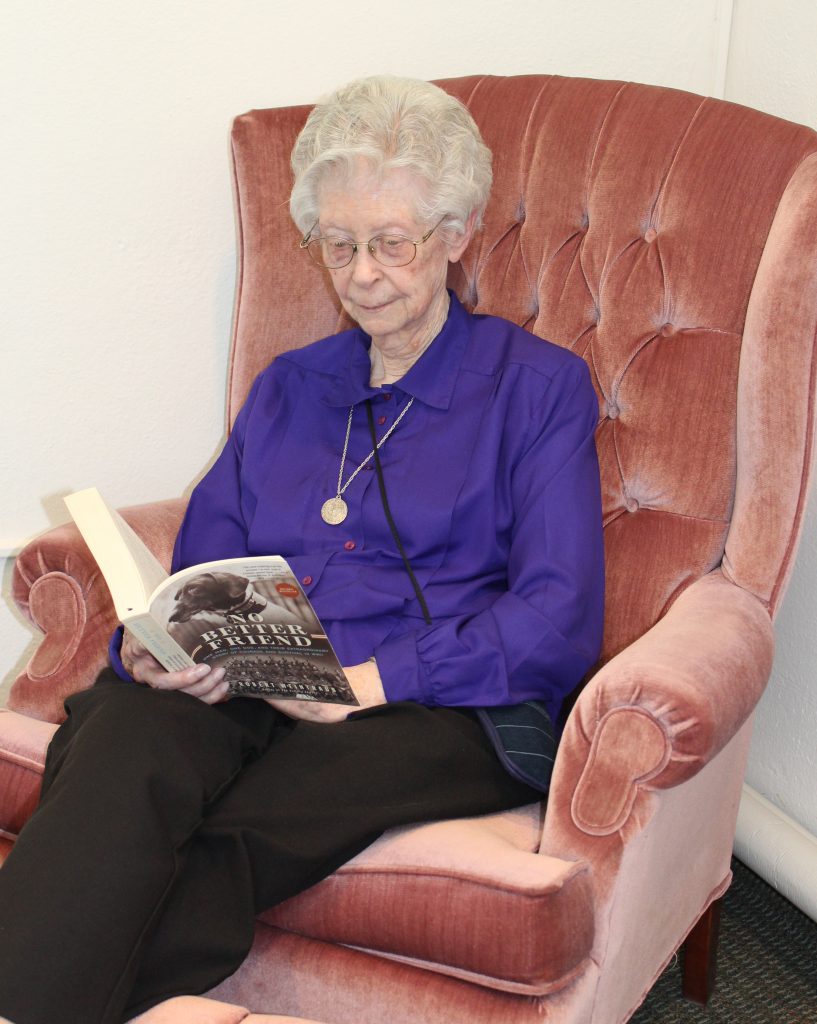 From an early age, S. Mary Fran Boyle has seen the importance and enjoyment of books.

For many, reading offers an escape from the mundanities of everyday life through a fictional avenue or a re-telling of an important event. Such is the case with Sister of Charity Mary Frances Boyle, who appreciates the themes and motifs of fiction and the facts and inspiration of nonfiction. Together, they can illustrate how different the world could have been and how beautiful the world is today.

When S. Mary Fran was a young girl, her father was often busy working on railroads. Because she and her mother were always home, her mother would give her daughter books to pass the time. S. Mary Fran estimates that she typically read up to six books a week. As a result, she attributes her affinity for reading to her. Acting as both a hobby and a bonding experience with her mother, S. Mary Fran recalls reading beautiful quotes from their books to one another while in the same room. “Whenever she wanted to give me a present, it was never dolls,” she says, “It was always books or series of books like Journey through Bookland and different encyclopedias.”

Since her childhood, S. Mary Fran’s taste in books had evolved, but she has never abandoned the hobby despite time constraints. S. Mary Fran reads a variety of written works, spanning from academic magazines to novels. Though she tends to dabble in various genres, she usually prefers mystery with an ensemble cast of morally dimensional characters. One of her favorite authors of this genre is Louise Penny, but says that it is difficult to pinpoint her favorite writers. Other novels and genres, such as low fantasy in the form of the Harry Potter series, also interest her for their characters and plot twists that grow as the series progresses. “You can read those at an adult level as well and notice the implications of society,” she says.

However, S. Mary Fran doesn’t just prefer fictional literature. When S. Mary Fran is in the mood for a more factual read, she regularly finds herself reading about historical events or people. In these instances, her subscription to National Geography: History magazine comes in handy. She also has become quite familiar with certain scholars that write about these events and is used to reading books that can sometimes go on for hundreds of pages. One such example is her current literary endeavor entitled Queen Eleanor: Independent Spirit of the Medieval World by Polly Schoyer Brooks. The scholars that write these stories can sometimes produce poignant historical fiction novels, another genre that she deeply appreciates. “Ken Follett does a good job on those big 900 page ones,” she says casually.

While S. Mary Fran usually does not read books on spirituality, she finds a faithful fulfillment in other places. As an avid reader of Scientific American, S. Mary Fran sees the good works and wonders of God in all creation. She finds that reading about science or the natural world is meditative in its own right and can be as reflective as prayer. “I can be all over the world by reading,” she says.

From an early age, S. Mary Fran has seen the importance and enjoyment of books thanks to her mother. Through reading a wide variety of genres and literary forms, S. Mary Fran is able to see the creativity of others in their writing or the creativity of God in the natural world of creation. When it comes to keeping her mind sharp and traveling around the world, the best place for S. Mary Fran is in her recliner with a book or magazine in hand.