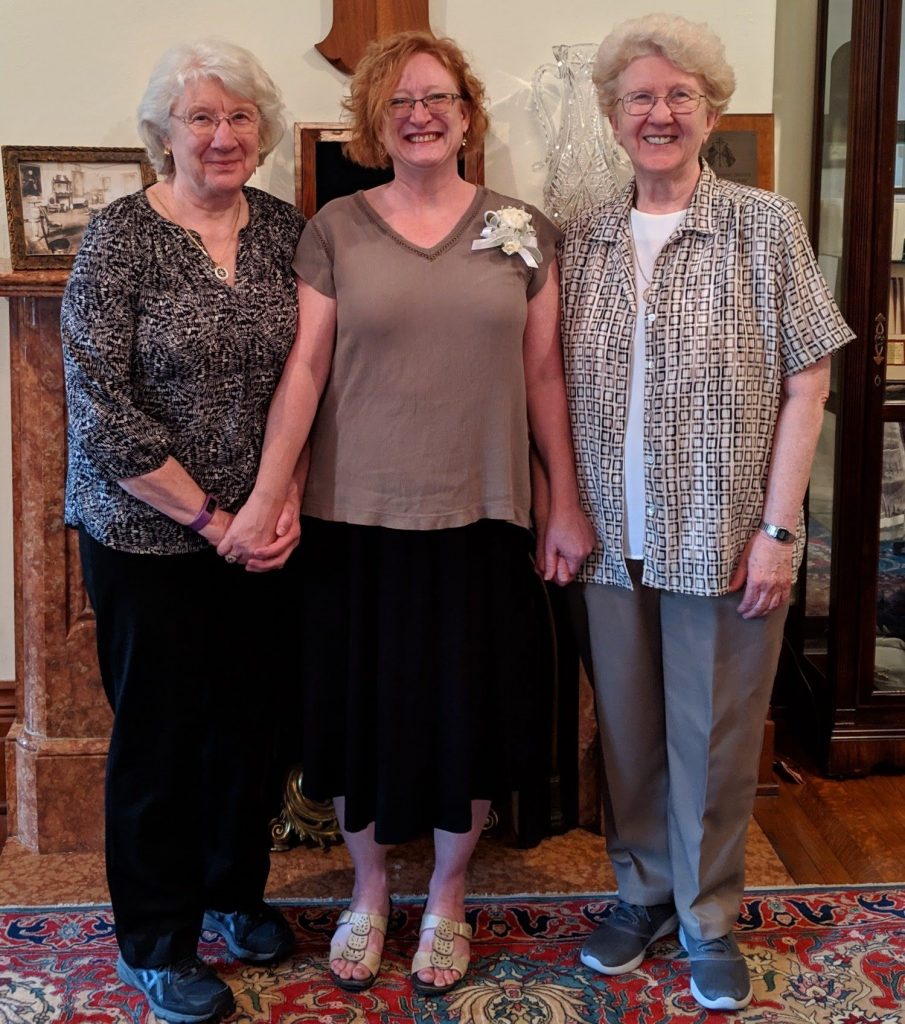 One of the key reasons for the Scripture existing today is a steady tradition of sacraments and service, but no one quite embodies the role that tradition can play like the Skalski/Branch family. A new Associate to the Sisters of Charity was welcomed into the Community on May 5, 2019, but Kate Branch had already known the halls of the Sisters of Charity Motherhouse well. Because her mother, Patricia Branch, became an Associate almost six years ago and her aunt, S. Marie Pauline Skalski, has been a Sister of Charity since 1967, Kate had two guiding mentors to help her continue the tradition of service that her family lives by.

Six years ago, Pat became an Associate to the Sisters of Charity after witnessing the meaningful life that her sibling S. Marie Pauline had lived. By dedicating herself to others, Pat found herself spiritually fulfilled by the life of service. However, the change in Pat did not go unnoticed. Witnessing the way her mother had changed due to her affiliation with the Sisters, Kate began to discern whether Association was an option for her.

Though she had always read memoirs and biographies about revolutionary women, Kate became fascinated with the lives of St. Elizabeth Ann Seton, S. Blandina Segale and Mother Margaret George. These figures inspired her to begin the discernment process two years ago, which ultimately led her to make her commitment as an Associate. “[I]t was interesting watching the effect it had on her way of thinking about her purpose in life,” Kate says. “A couple of years ago I began to weigh if this was an avenue for me.” 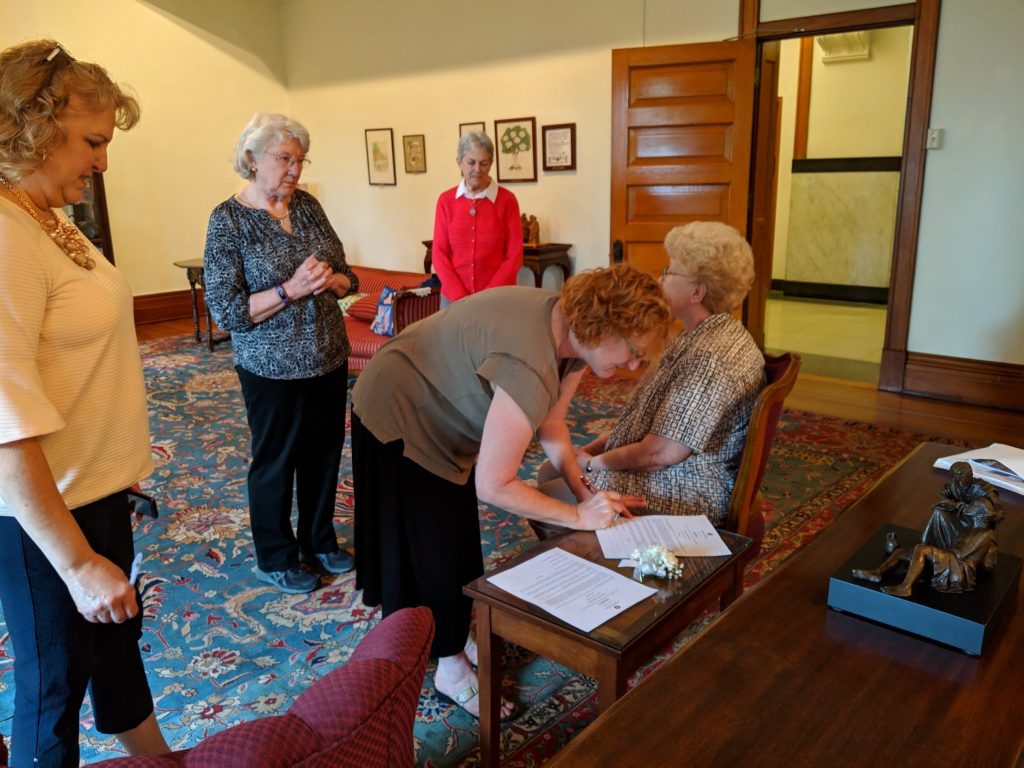 Kate Branch (second from right) signs the paperwork to officially make her commitment as an SC Associate in Mission.

Since becoming an Associate, Kate has been able to empathize better with her mother and with the Community that has always had an impact on her life. In turn, Pat has seen the woman that Kate has become, which has made her proud. The two have begun to regularly speak about their faith with one another and how serving others has changed their lives. This has strengthened the bond between the mother and daughter, as the teaching of service that Pat has lived by has become an integral part of Kate’s life. “The smile we give a stranger, the helping hand, the holding of a door —when these things are done because we are acknowledging the Divine in people, we are promoting the charism of the Sisters of Charity,” Pat says.

Kate has accepted various service projects due to her hands-on approach to charity. Her variety of services reflect the Sisters of Charity charism that include sharing resources with those in need and caring for all of God’s creation. Kate says, “I honor my Associate commitment by sharing my time and resources with people who need help, being loving and just, treating all creation with respect. I have three active commitments: two to elderly women, and one to a family of five who need help. I also care for rescue dogs, several of whom are blind or have been severely abused.”

Marie Pauline has promised to guide her throughout her selfless commitment. While the two have often spoken about their thoughts and concerns with spirituality, they are both grateful for each other’s input on how to “further the Sisters of Charity spirit and ideals.” S. Marie Pauline was happy to make this deeper connection with her niece that only made their relationship stronger. “It is very gratifying to have the tradition of faith and service intertwined with my Charity family and my family of origin,” S. Marie Pauline says. “It gives us expanded perspective and support. I love sharing my Charity life with them, and sharing them with my Charity family.”

It came as no surprise to Pat and S. Marie Pauline when Kate decided to honor the tradition of charity in her family. The family’s spiritual integrity and selfless service to those in need beginning with Kate’s grandparents have groomed Kate for her time of service. As her mother says, “Kate has always been kind and compassionate, so it is comforting and reassuring to see the tradition continue, but it is especially precious to me that Kate has chosen to formally associate herself with the Sisters of Charity.”