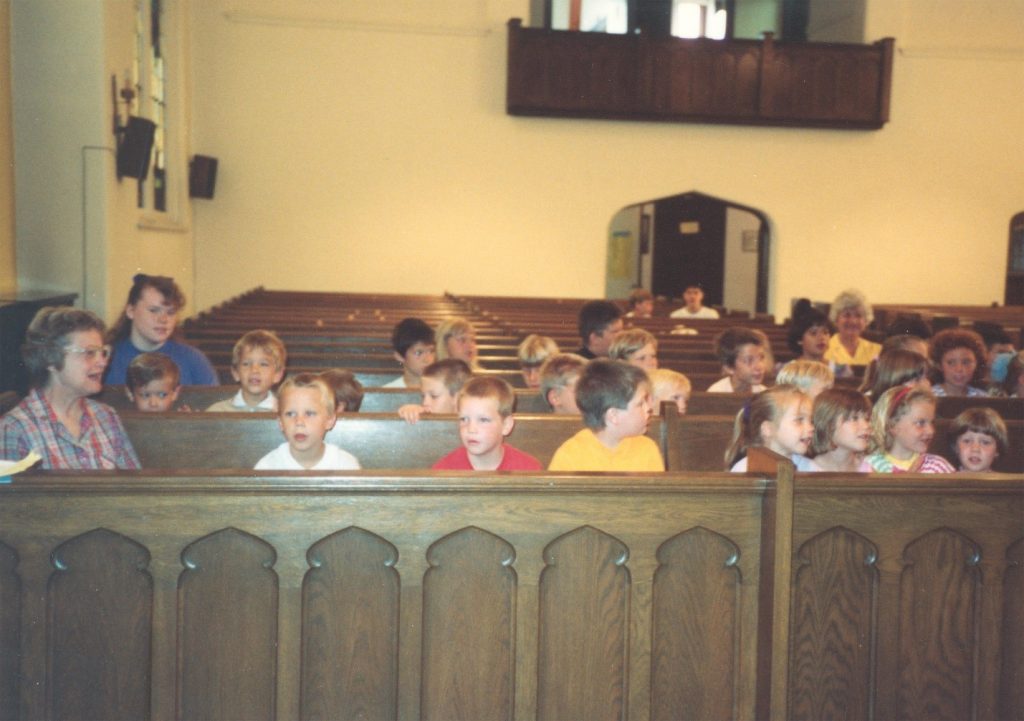 S. Pat Hill (front row, left) has been involved with Vacation Bible School at Immanuel United Church of Christ, Wilson Presbyterian Church and St. Clement Parish since its beginning in 1989.

An upcoming Vacation Bible School taking place from Aug. 10-14 will mark the 30th anniversary of an enduring tradition that excites even the most casual of Church-goers. Working alongside parishes across Cincinnati, Ohio, Sister of Charity Pat Hill has been a part of the event since its beginning in 1989 and remains a staple of the program to this day. The inclusion of various religious beliefs has been strengthening the faith of all that are involved, making it an enriching and gleeful experience for S. Pat and the students.

The Vacation Bible School, or VBS, began as a joint effort between a Catholic Church and a Protestant Church. S. Pat began ministering at St. Clement Parish in St. Bernard, Ohio, in 1988 when she was given a flyer from the Protestant Immanuel United Church of Christ in Cincinnati. The flyer stated that the parish needed volunteers for VBS. The parish minister of St. Clement at the time gave the flyer to S. Pat and wrote, “Why not make it a joint effort?”

After collaborating with the wives of the parish ministers of Immanuel United Church of Christ and Wilson Presbyterian Church, it was decided that the designed program would take place alternately between the involved parishes. Since the event began as a joint effort to create VBS, each of the participating Churches offered their facilities to host the event. S. Pat says, “It was an ecumenical experience for me to be able to work alongside these women; it was wonderful.” This year it is being hosted by the Immanuel United Church of Christ under the leadership of Colleen and Deacon John Gerke.

During this week in the summer, all of the participants thoughtfully take part in a series of activities that put the year’s annual theme into practice, such as storytelling or making crafts. At the end of the week, all of the students perform a concluding act or play to display a talent or demonstrate what they learned over the course of the week. The activities that take place during the week often vary, but they always center on a theme chosen by the directors of the program. In the past, some of the themes have included “Parables of Christ” and “Miracles of Christ,” but this year’s theme is, “30 Years of Building Community Together: Loving God and Your Neighbor.”

Because the event is proctored by people from different branches of Christianity, the diversity of students has become an important part of the experience. Not only has S. Pat been able to spot consistencies in each faith compared to hers, but she believes that this further proves that everyone is a child of God, regardless of creed. While some of the attendants focus on learning more about God, others are happy to have a place to go and are welcomed with open arms by the program’s directors. “We have many returning students, but there are a lot of them that we don’t know,” S. Pat says. “Some of them don’t even go to Church, but we’re just happy to have them.” 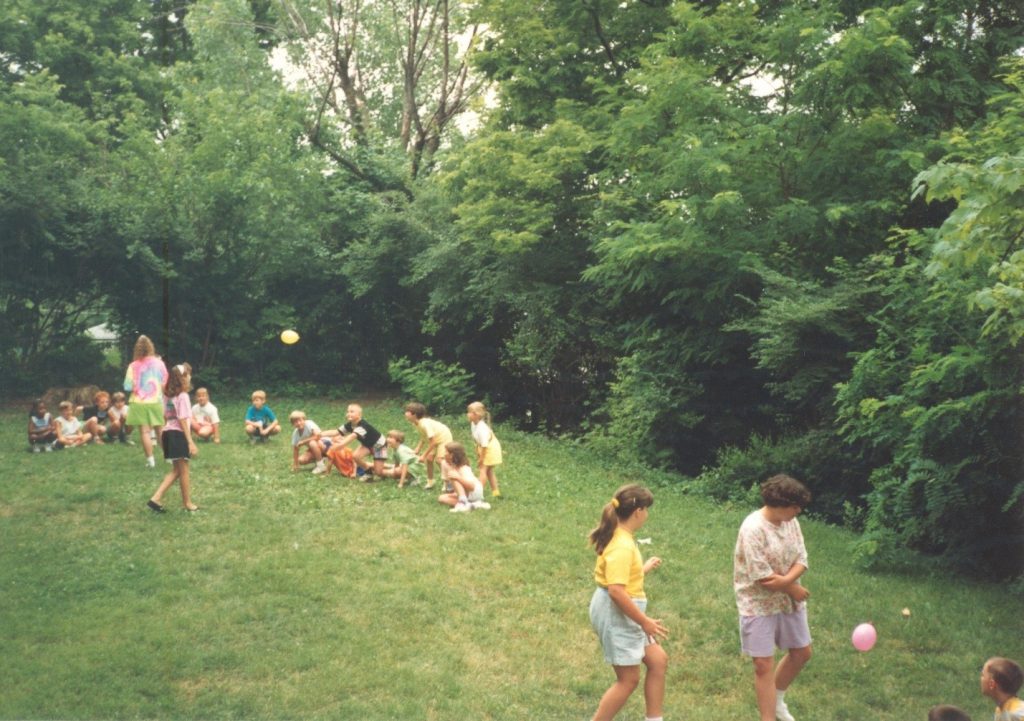 The week-long camp is as much fun as it is educational due to the many activities that are scheduled.

There are no age restrictions for the event, as the age range varies for the students from preschoolers to teenagers. The teenagers are often people who return for their second or third year; in order to give back to the event that means so much to them, these older students volunteer to make the event run smoothly and act as role models for the new and younger students. The experiences have become so moving that other parishes from Cincinnati have also become involved with VBS, including a Baptist Church.

Though she retired from a leadership position for the event about seven years ago, S. Pat finds herself volunteering for VBS in any capacity possible. Her history in education as a first grade teacher for 20 years prepared her for the role, making her ideal for leading the activities with the younger students. Each group of children offers their own unique brand of fun, but S. Pat always notices the gleeful experience that both she and the children have. “It’s a positive experience that children associate with the Church, which I think is the best part about it,” S. Pat says. “It encourages them to attend Church in the future because those are the things that they remember.”

Pat is happy to take part in such an enlightening experience for these children and hopes that by giving them a memorable experience with the Church that she will be able to inspire a greater attendance at their respective churches. Evident by the numerous parishes that are now involved with VBS, S. Pat and the VBS community demonstrate how there are more similarities than differences between groups.