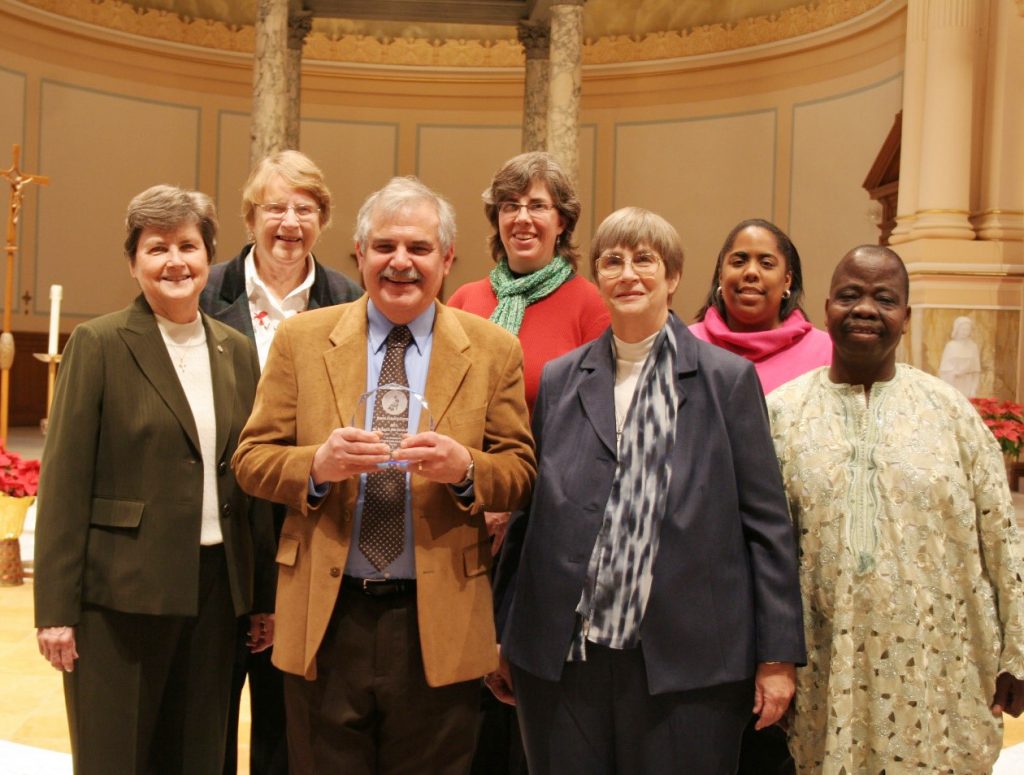 Dave Scharfenberger (third from left), winner of the 2011 Elizabeth Ann Seton Award, will become an Associate to the Sisters of Charity after serving alongside them for years in various social justice efforts.

First meeting the Sisters of Charity in the mid-1970s, Dave witnessed the care that the Sisters had for others through their involvement with Working in Neighborhoods, or WIN, where he was serving at the time. In his personal volunteer work throughout his life, he was pleasantly surprised to see the Sisters that he had become friends with were taking an active part in many of the same efforts as he was. Meeting S. Barbara Busch and the late S. Judith Martinez changed his life when they offered him a variety of perspectives on different issues that he was contesting.

As such a dedicated volunteer, many of the Sisters of Charity already assumed that Dave was an Associate. It wasn’t until August 2018 that he began to consider it for the sake of his spiritual growth coupled with his admiration for the Sisters. After a year of discernment, he will finally make his commitment on Aug. 11, 2019. “The values that I have relate to the values and the charism of the Sisters of Charity,” Dave says.

“Helping others is a part of who I am,” he continues. “Being an Associate is an extension of that.” Finding that his faith is renewed with each person that he helps, Dave has been happy to share his faith with his Sisters of Charity companions. His faith is found in his loving relationships with others, such as the many Sisters that he has known in the present and past; the late Sisters Loretto Burke and Louise Akers, for example, were a constant source of inspiration to him. Not only did they renew his faith with their commitment, but they reminded him about the role that women religious have in the world. “Women religious are a pillar of the Church,” Dave says. “The Sisters of Charity are a good part of that.”

Since retiring, Dave has been investing even more of his time into numerous social justice efforts across Ohio. In fact, his efforts earned him the Elizabeth Ann Seton Award in 2011. However, Dave is also a purveyor of energy conservation, an adjunct professor of Appalachian Culture and volunteers two hours a week at a Chaplain Office. He continues to serve in WIN where he first met the Sisters of Charity.

Despite his history in these fields, he never limits himself to the services in which he takes part and likes to keep his possibilities open. “I haven’t decided on a new service, but I’ll definitely continue where I am,” Dave says. “Something new may come in the future that I’m passionate about and I’ll be happy to take that project on, too.”

Dave hopes that his contributions will do the Sisters of Charity justice and that his volunteer work will make the Sisters proud. With an open mind towards the future, Dave is excited to discover what is next for him as an Associate.