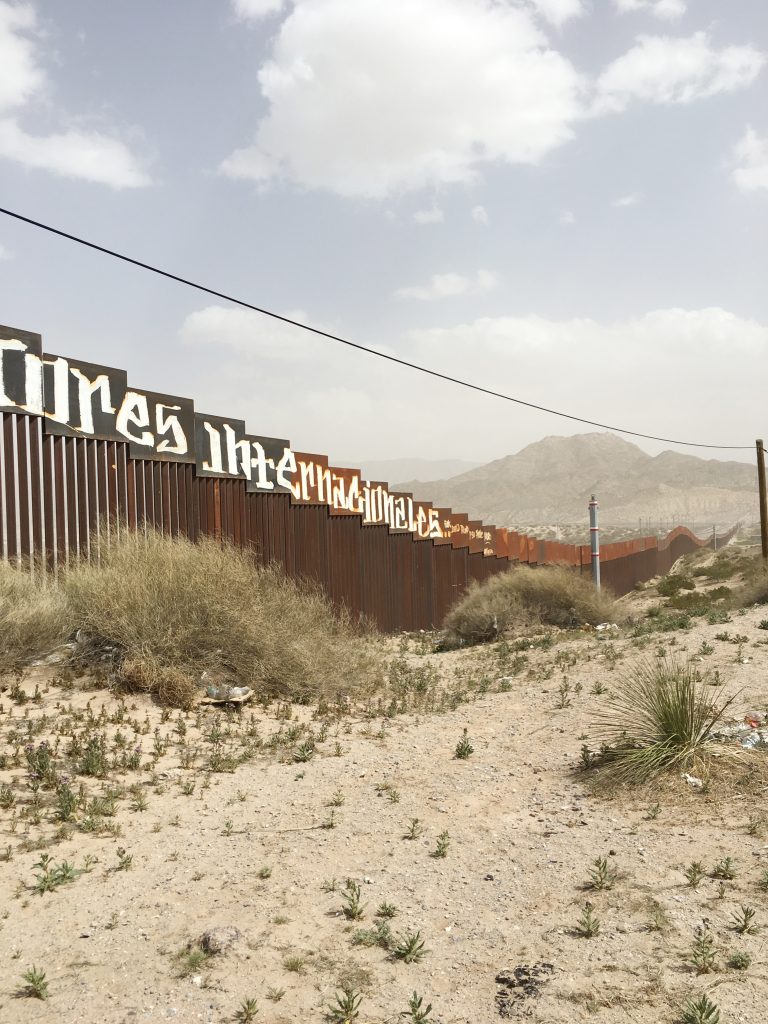 View of the U.S.-Mexico border wall.

This article is the second of Intercom’s three-part series on “Sharing the Journey” with the migrants who cross our borders from Central America. The previous article shared some of the reasons the migrants come, and how Sisters and Associates of Charity have joined other volunteers to help them. To date, at least 34 different congregations of women religious have sent volunteers to the border in the past year alone. Estimates have placed the number of Sister and Associate volunteers nationwide between 160 and 200.

The present article will describe the work the SC volunteers did while on the border, and some of the experiences they and the migrants had. Those who couldn’t speak Spanish worked preparing meals and helping distribute donated clothes. Sisters Louise Lears and Juliette Sabo described the reactions of the migrants:

We still had a little bit of food left, and this one young man wanted more bread. He took the bread and picked up every bit of the juice left in the pan. He enjoyed it to no end. And after that, whenever we would see him in the hall, he would smile and pat his tummy.

Others packed travel kits for the migrants to take with them on the bus; food for journeys that might last two or three days. 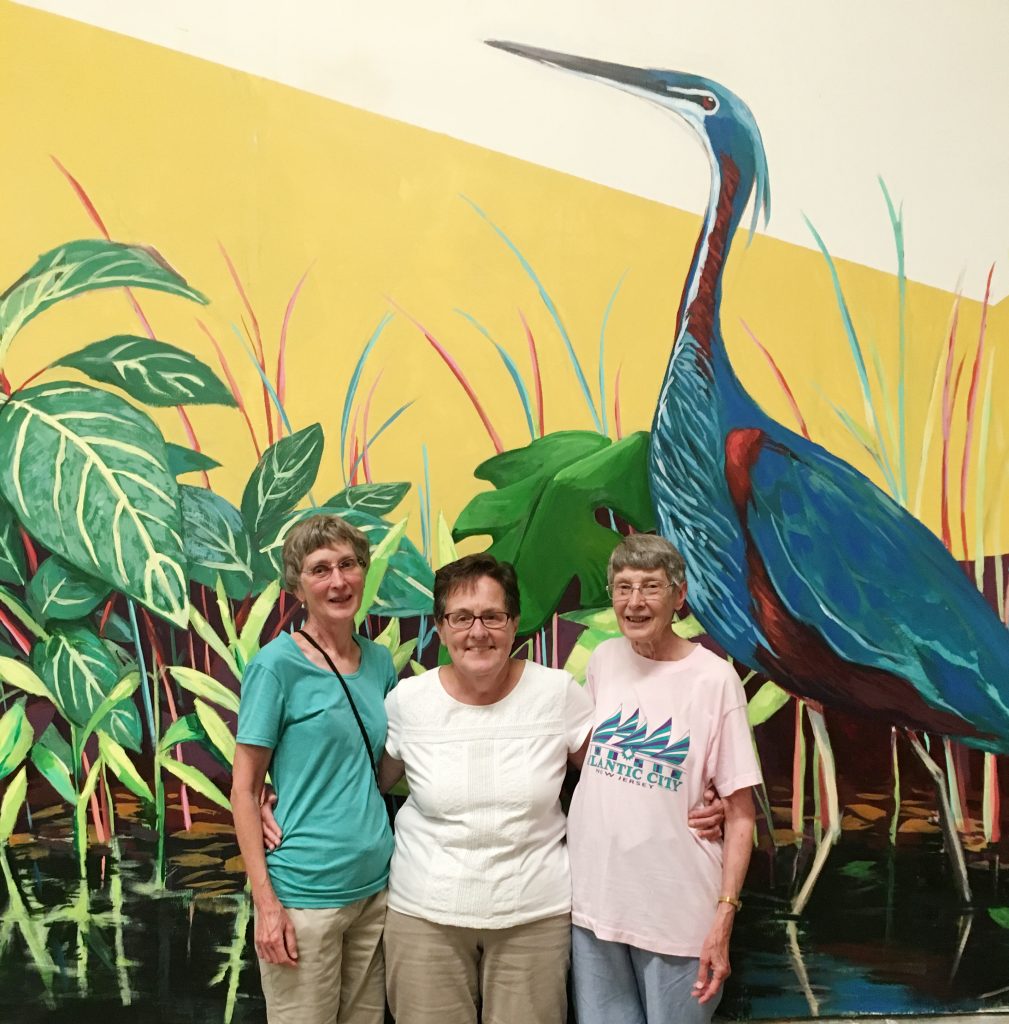 The Sisters who could speak Spanish helped drive families to the bus station or airport to join their relatives or sponsors elsewhere in the United States. They also helped process the migrants when they first came to the shelters. Associate Patrice Harty described the process:

The volunteers told numerous stories of experiences they had while working at these tasks. S. Caroljean Willie told of interviewing a mother with three small children, who only spoke a Mayan language. Her husband was already in the United States and had sent her plane tickets to Oakland, California. She had never been on a plane before and was terrified. S. Caroljean said that the hardest thing was not knowing what happened to the migrants after they left El Paso: “I want to know if Guadalupe ever got to where she was supposed to go. But we don’t know. We don’t know if they get to where they are going.” S. Annette Paveglio pointed out that the migrants’ future is not assured even after arriving at their destination: “If they stay there until their court date, they could still be sent back.”

There was a mother and her daughter. The mother didn’t speak Spanish; she spoke only some Mayan dialect. The daughter was learning Spanish. I didn’t know if she understood the medical questions. Anyway, this girl is diabetic. We had visiting doctors who would come to the shelters because there were so many kids with nasal congestion and coughs from the conditions. And he caught the fact that she was close to a diabetic coma. They sent her to the hospital. Her blood sugar was up over 570, I think. She hadn’t had any medication for six months. No insulin, nothing.

In one of the new refugee shelters in El Paso, Texas, the above mural was painted to make the shelter more welcoming to its guests.

There were also inspiring experiences. Sisters Christine Rody and Annette mentioned the deep faith of the migrants they served in El Paso:

The Sister in charge said, “The people who have just come want to pray.” So she was inviting everyone to come and pray with them. And there was kind of an empty room with a good-sized crucifix, about four feet tall, and it was on a table so that people could gather around it. So this whole group of refugees stood around and Sister led them in prayer. We didn’t suggest to pray together. It was their idea.

Sally Duffy, who volunteered at the shelter in McAllen, said that the migrants there organized a daily communal prayer service.

Several Sisters mentioned the eagerness of the migrants to help out in the shelters:

The men who were there were very helpful. They were the ones who volunteered for the cleaning crew. They’d clean the tables, sweep the floors, and do all that kind of stuff. The women were mostly watching the kids, trying to take care of their children. But they were stripping beds and collecting towels. In fact, that was what the work crew was composed of – someone from the volunteer staff who organized the people. Like, one day in the clothing room, we had about five women who came in. The place was chaotic because people just bring clothing and drop it off. Well, nobody had time to sort through it.

These five migrant women brought order out of the chaos in the clothing room. Another group of women organized themselves to do the meal preparation during their short shelter stay. 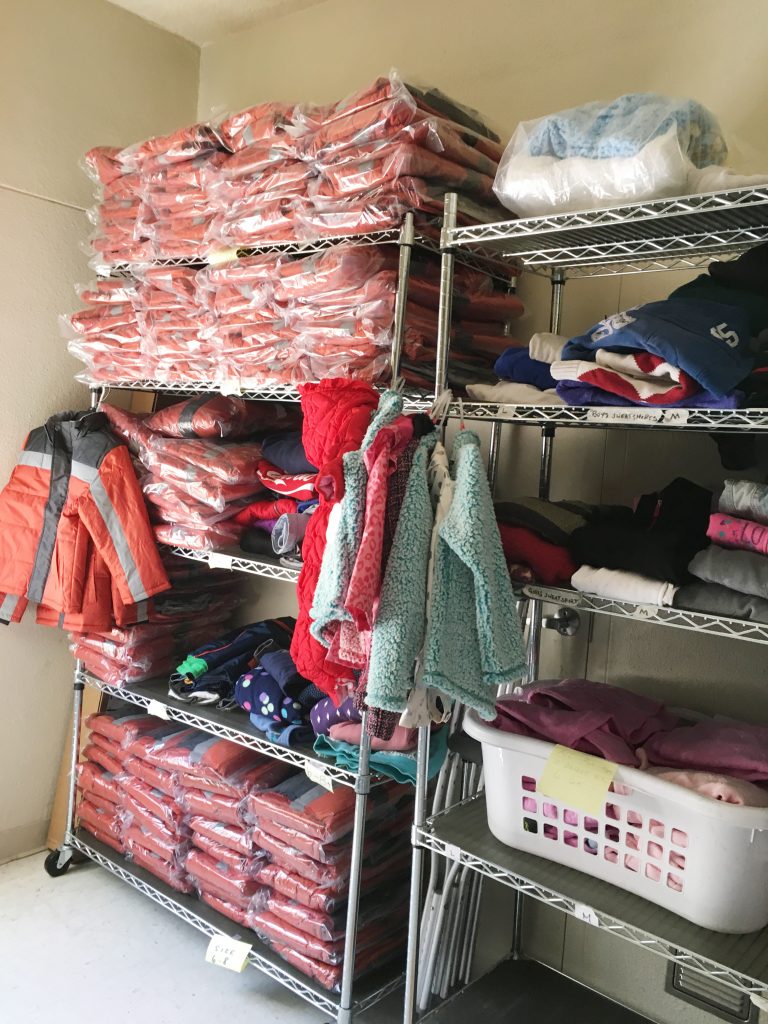 At Nazareth House in El Paso, Texas, a shelter that welcomes migrants and asylum seekers, up to 135 guests can stay and receive temporary hospitality and travel assistance. Sisters Annette Paveglio and Mary Fran Davisson helped with the organization of the clothing donations.

The volunteers heard sad stories, too. S. Jean Miller recounted the story of one woman:

One woman who was helping in the clothing room said she was from Guatemala. I asked her what part of Guatemala. She said: “Well, I am not really from Guatemala, I grew up in Honduras. The drug cartel killed my brother because he wouldn’t get involved. I was not at all involved in anything with him, but all of a sudden they were after me.” She said, “I got very fearful that I would be next.” So, she said, “I moved to Guatemala. I was there four months when they found me there, so I decided I would have to leave.” And so that’s what made her leave Guatemala.

Caroljean told of a woman whose 12-year-old daughter was sent to a separate facility. The woman couldn’t find her, and so the girl was expected to travel on a bus by herself from El Paso to Florida. “That’s a recipe for disaster,” S. Caroljean said. Associate Evangeline Andarsio told a similar story:

One of the women was separated from her husband. He was in a different detention center, and she started to cry. It was so sad to see her reaction of not knowing where her husband was located, to see the tears, and to know that she was pregnant.

Only a small fraction of all the volunteers’ experiences can fit on these pages. But all emphasized that they were deeply affected by their time with the migrants. The third article, in Volume III of Intercom, will describe some of the lessons they learned.