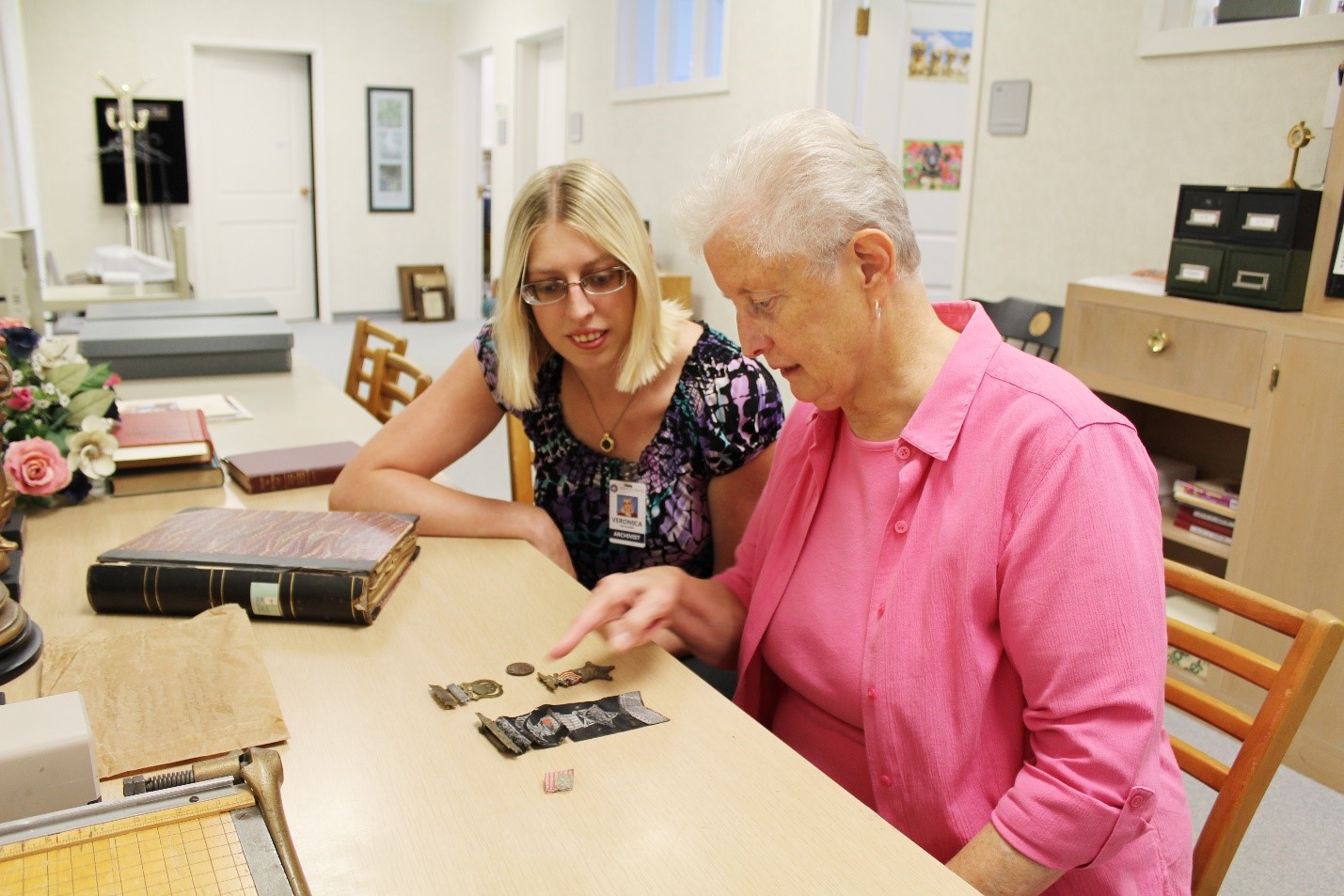 Veronica Buchanan (left) made her commitment an Associate in Mission to the Sisters of Charity after working alongside them as an Archivist.

While many in the SC Community know her for her extensive knowledge on the Sisters of Charity and her thorough work in the Congregation’s Archives, Veronica Buchanan has become an even closer part of the Community when she made her commitment as an Associate of the Sisters of Charity. Preserving SC history has been her career for three years, but Veronica hopes to honor the tradition of service through Association by “daring to risk a caring response.”

In 2013, Veronica met the Sisters of Charity while working for the National Archivists for Congregations of Women Religious, or ACWR, in their head office in Cincinnati, Ohio. Noticing a “sense of authenticity” from her first encounter with the Sisters of Charity, Veronica immediately felt a deep sense of who the Sisters were and their ministries. Learning about the Congregation’s important figureheads like Elizabeth Ann Seton, Mother Margaret George and Blandina Segale only heightened her appreciation for the Community. She was offered a job as an Archivist when the director of the office stepped down, an offer which Veronica accepted with great enthusiasm in May 2016. However, as Veronica says, “I felt another force repositioning me to become an Associate.”

As a previous Associate of the Franciscan Sisters of the Poor, faith has always been important to her just as history has. However, Veronica felt a particular sense of closeness with the Sisters in their Associate program as it tested and strengthened her faith through personal interaction with her mentors. The monthly meetings with her mentor, Kay Jackson, harbored their friendship and fostered her faith. More so, the Associate program expanded upon the virtues of the Vincentian charism established in the 1600s taught to her in her former Associate program by placing a keen focus on the importance of humility, simplicity and charity. “These meetings helped me to expand upon Vincentian charism of these virtues and taught me how to apply them in my life,” Veronica says.

Veronica continues to share her talents by making invaluable contributions to the SC Archives and will continue to as an Associate. Known among her colleagues as a determined and well-spoken young woman, Veronica always completes the tasks that are assigned to her with a gracious attitude and wholehearted energy. As one of the driving forces of the SC Archives and their synergy with the Communications Office, Veronica says, “I enjoy being a part of building a bigger Community. We reach out to a broader audience now and I want to continue to do that.”