Birding: The Life Birds of Friendship 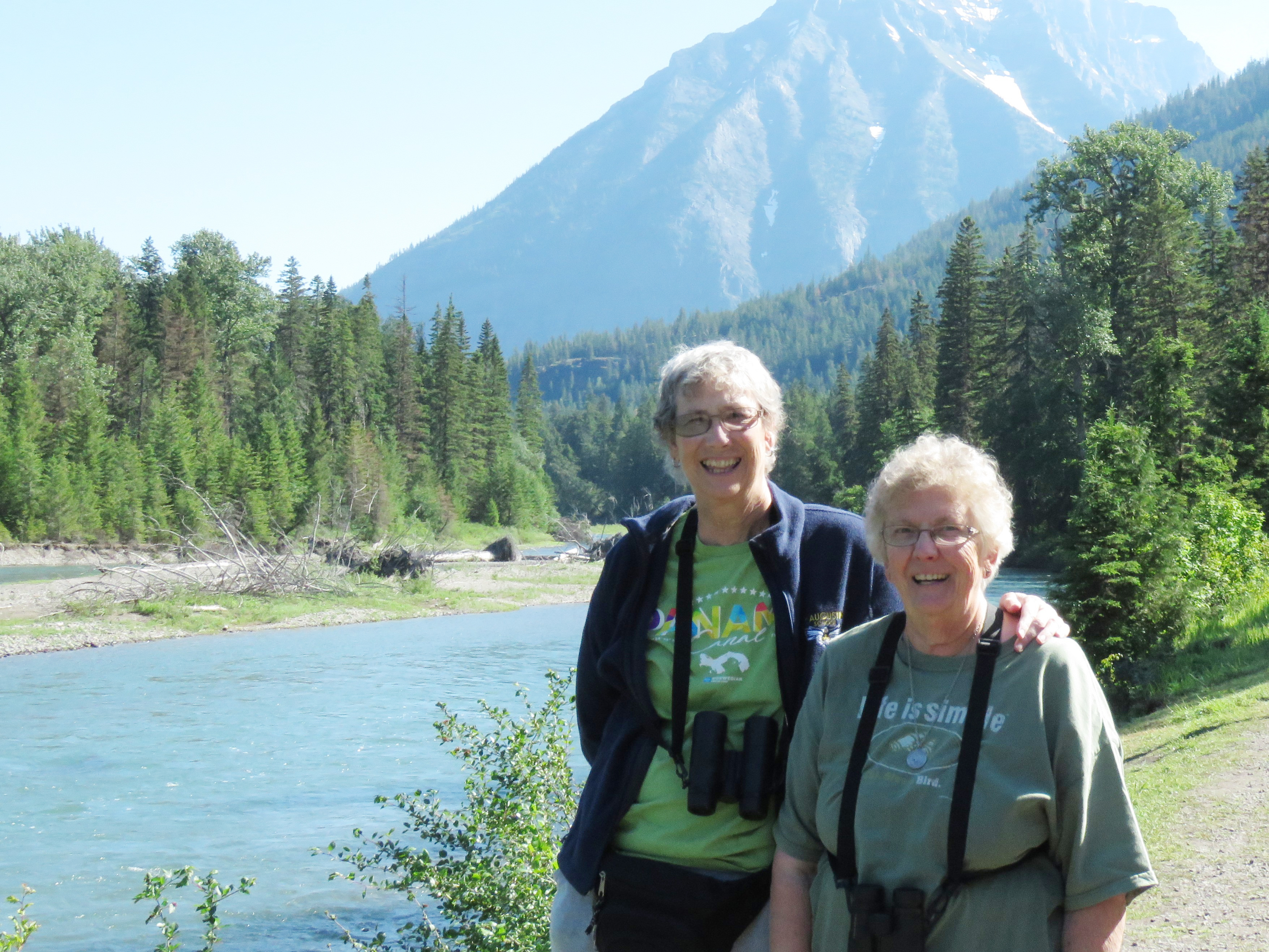 S. Marty Dermody (right) and Rita Wesseling have traveled all over the world to find new species of birds together in exciting places like Glacier National Park in Montana.

When wings take to the sky during the changing of the seasons, Sister of Charity Marty Dermody and Associate in Mission Rita Wesseling are quick to grab their equipment to watch for the brilliant birds in the sky. Birdwatching, also known as birding, laid the groundwork for the friendship that took fl ight between S. Marty and Rita and has nourished the spiritual growth between them. A friendship that has endured for more than 50 years, the duo have no plans of stopping their unifying pastime.

S. Marty became interested in birding when she was teaching at Corpus Christi in Dayton, Ohio, in the late 1970s. She heard of a class entitled “Spring Ornithology for Adults,” which was a 10-week program that was being offered at a nearby museum. Over the course of these weeks, S. Marty became familiar with the calls and songs of numerous birds and their colors. In addition, she learned about the various flowers and trees that were often associated with the birds that she would find. Eager to learn more, S. Marty took the class several more times even though she had moved away from Dayton. “I just couldn’t get enough,” she says.

Rita, however, began birding as a result of S. Marty’s interest. Their friendship began in 1968 when they entered the Community. However, their friendship became even stronger in the mid-1990s. While on a trip to Africa in 1995 with the Cincinnati Nature Center, Rita saw S. Marty’s interest in birds and began to take up the practice of birdwatching. Together, they recall seeing more than 300 birds on that trip alone. Rita began to hone the craft of birding through daily practice on this trip, but she was more pleased with the friendship that began to bud between her and S. Marty. Despite her skill and years of practice, Rita still humbles herself on her ability to birdwatch compared to S. Marty. She says, “I like to joke that I’m a kindergartener when it comes to knowing birds, but S. Marty has a Ph.D.!”

The friendship began as a mutual love and respect for the Earth, but evolved into a friendship just as concerned with spirituality. As a result of S. Marty’s devotion, Rita felt called to be an Associate in Mission to the Sisters of Charity. To honor her mission as an Associate, Rita has taken part in many faith-based services for the Sisters of Charity. For example, Rita volunteers her time to help S. Marty with her ministry in spirituality, another important pillar of the friendship that they have created. While they mostly operate according to the travel and birding lists that they create on a year-by-year basis, their list of accomplishments expands as often as their lists of tasks that they undertake. Their list of tasks is not exclusively based on the birds that they want to see, but the places they want to visit. “We see monuments and seek out birds and wildflowers. Wherever we go, we work those two things in,” S. Marty says.

The list idea came from the organized mind of Rita, who compiles a list of places to visit, creates a budget and plans out when they can travel to these places. S. Marty will then find a list of birds that are specific to the places that they would like to explore. They are ultimately working towards crossing off items that are on their all-encompassing bucket list. While they believe some of their desired locations are out of reach or just out of budget, they are hopeful to visit these places one day. 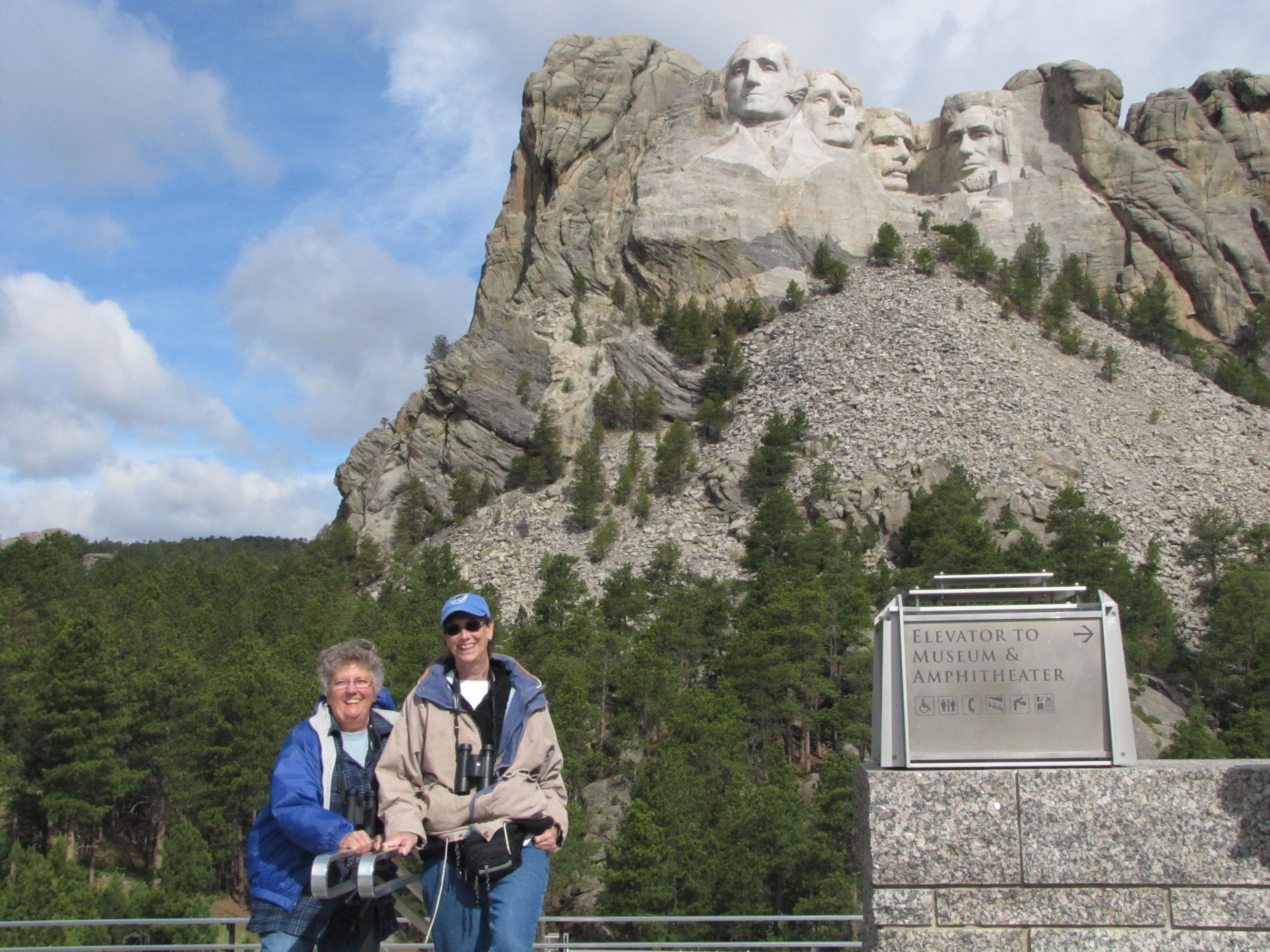 Though their passion is birdwatching, S. Marty (left) and Rita enjoy sightseeing in places like Mount Rushmore National Memorial in South Dakota just as much.

S. Marty and Rita have taken their friendship to staggering new heights and unfamiliar places to explore the various bird species. Some of the places that they have visited in the united States to spot some of these majestic winged creatures are Wyoming, Alaska, Alabama and Utah. Some of their more exotic and out-of-country experiences include Iceland and Africa. But, no matter where they are, they honor one tradition: they always make sure that they start off each new year by birdwatching together on the first of January.

“Balance” is the word that the two most attribute to birding because it marries appreciation of the Earth to the faith that they share. The duo finds that it offers an escape that they can’t find anywhere else. Following a surgery, S. Marty wanted nothing more than to look at the birds out of the window, something that Rita made happen when she visited her in the hospital. Putting her in a wheelchair, Rita and S. Marty went on a small birding expedition to a nearby window. Birding also helps S. Marty appreciate the gifts of nature and creation, which puts into perspective the responsibility of all people for the stewardship of creation. “It’s just a respect for creation and a respect for nature,” S. Marty says.

An appreciation for nature has always been an integral part of Rita’s personality as well, as the life of the outdoors soothes her mind and puts her worries at ease for a short period of time. Birding in particular gives her something else to focus on besides her anxieties, a distraction that she welcomes. As a retired science teacher, Rita is able to better appreciate this pastime with S. Marty because of her knowledge in biology, which makes it a unifying experience for the two. The “feathered friends” that they often see are responsible for their  friendship and spiritual growth.

When a birdwatcher spots a bird that they haven’t seen before, they are referred to as, “life birds,” but the friendship between S. Marty and Rita allows new discoveries to be found every day in birds, faith and one another. The two will continue to seek out new winged allies in every new exciting place that they visit, while always making sure that the other is learning and growing from the experience. In fact, Rita now considers herself more of a “first grader than a kindergartner” in birding skills because of S. Marty’s mentorship over the past 50 years. They hope to one day cross every item off of their bucket list, both in travel and in birding, all the while keeping each other in nurturing  company.