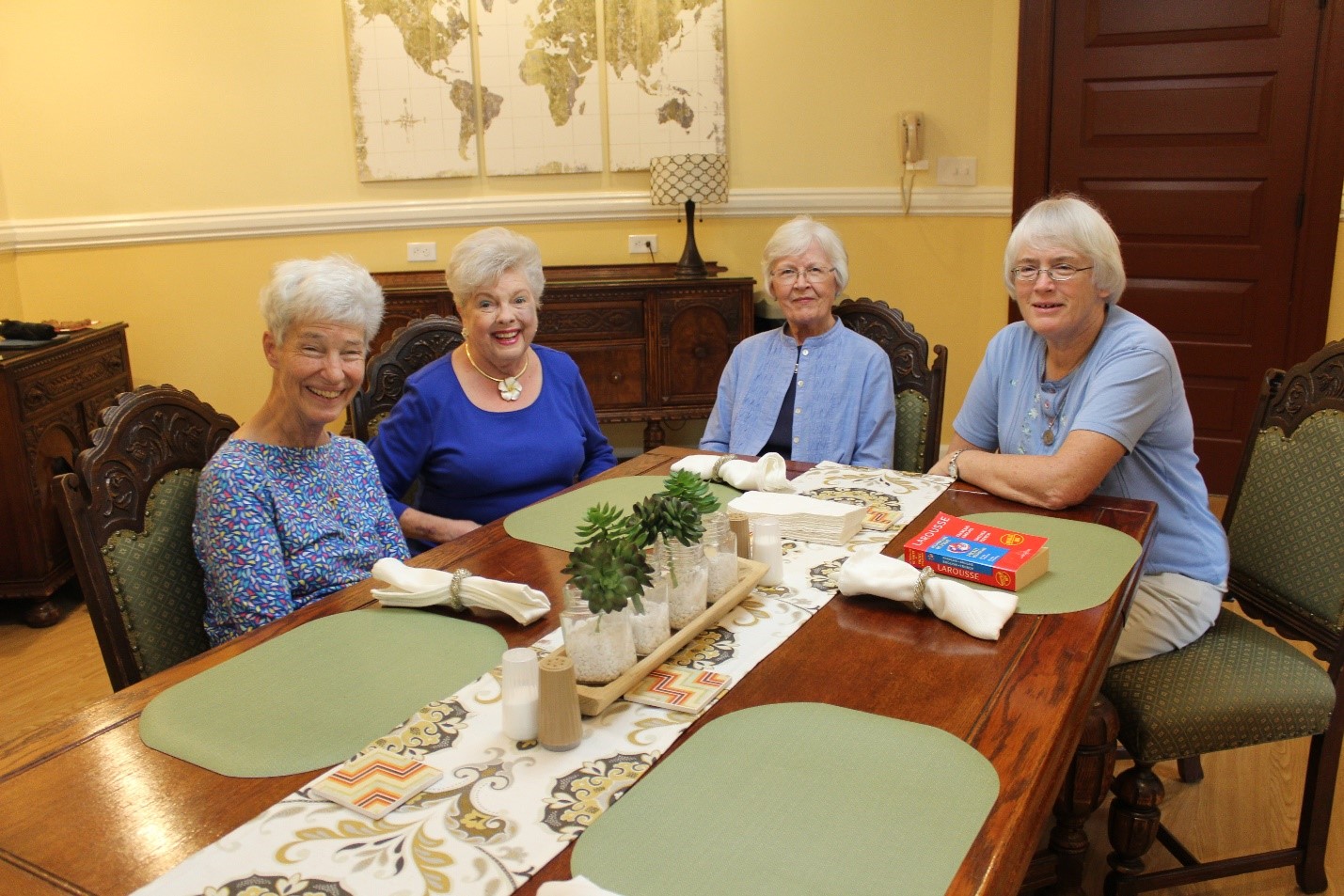 French is one of the most spoken languages on Earth, existing in many variations and flourishing in the most impoverished parts of the world. Just as the language has traversed the land and seascapes, a few Sisters of Charity and Associates come together once a month to meet with their French group. With Sisters Pat Wittberg, Nancy Bramlage and Alice Ann O’Neill and Associates Christa Bauke and Mary Ellen Williams, the quintet celebrates diversity in a fun and educational way.

The French language interested each member of the group at different points in their lives: for Mary Ellen, she taught the romance language for many years; for S. Pat, who graduated with a History degree, she brushed up on the language and began teaching it in high school; S. Alice Ann was raised in a French-speaking household in Canada and is the most fluent. Additionally, S. Nancy majored in French at the suggestion of Christa and several other members of the Community, eventually teaching high school French for a number of years. Familiarity with the language also served S. Nancy well while teaching in Malawi. However, these five didn’t come together until much later. What brought them together was the Congolese family that the Congregation embraced through its Newcomer Transitions program. The family members were struggling with English, but were proficient in their dialect of French. After helping this family adapt to their new culture, the group, who had noticed that many discussion groups around Cincinnati, Ohio, were being dissolved, decided to create a club. “A few of us met on the elevator to help out the family and as we were leaving, we said, ‘Why don’t we all get together?’” Mary Ellen says.

The group has been around for two years and, during their meetings, they only speak to one another in French and bring authentic French snacks and cuisine. When they began to meet regularly, they found that they had more than knowledge of the language in common; for example, they realized that most of the members of the group were taught the language by the same Sister of Charity, the late S. Ruth Jonas. Not only do they speak French, but they also read it. The international children’s book sensation Le Petit Prince, or The Little Prince, has become the group’s favorite book because of its use of language and challenging themes that still hold true to adults. S. Pat says that the book has been an important tool in the journey to understanding the language, as there is always room for improvement and there is always something to learn. Stressing the importance of what bilingualism can offer in the modern world, S. Pat simply says, “Everybody should be bilingual because it helps with your mental health. Other than that, it’s fun and our group laughs a lot.” 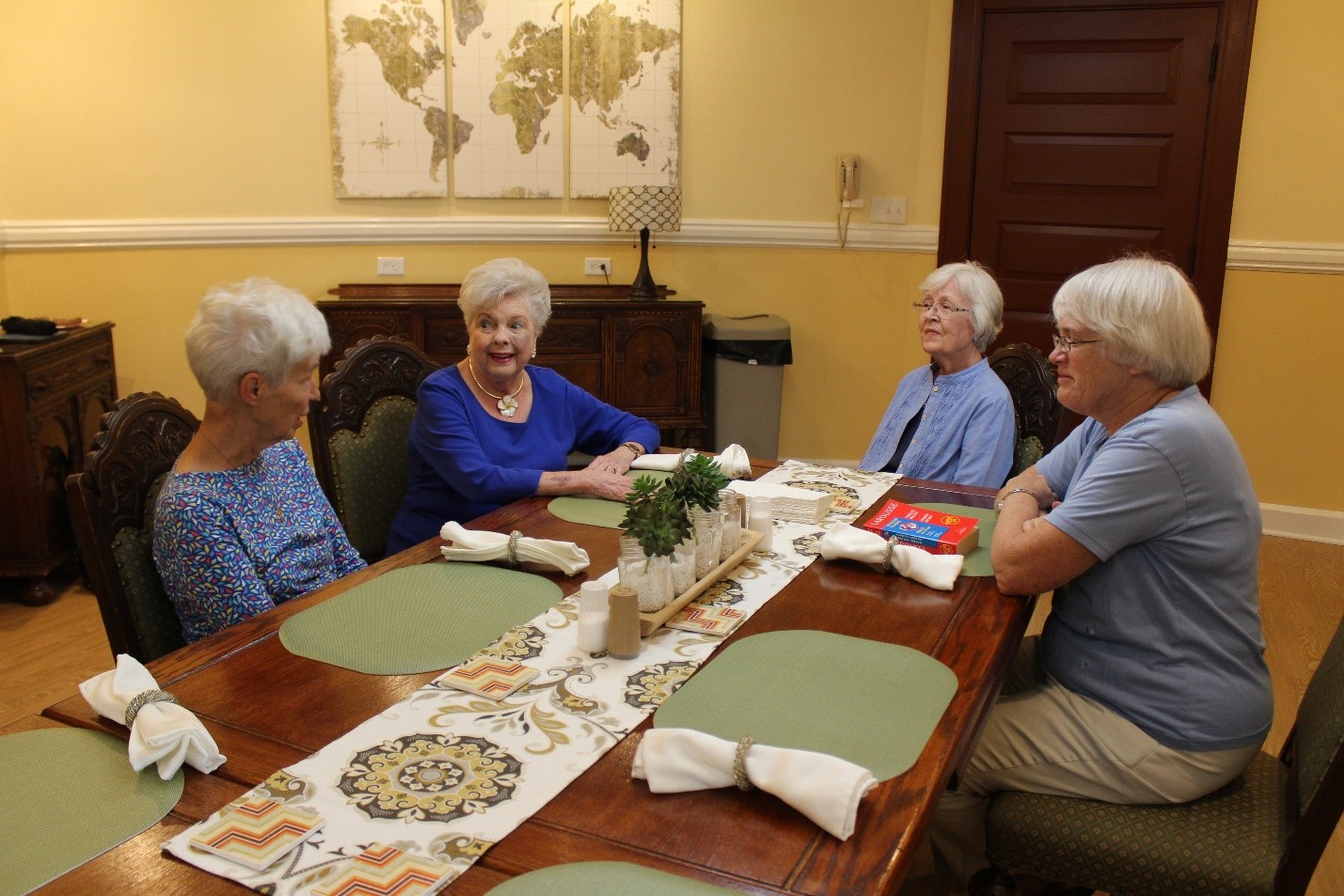 During these monthly meetings, all members of the group only speak French to one another to learn about the romance language.

Not only has the group noticed that their proficiency in the language has grown, but also that they have been able to empathize with a multitude of different cultures and societies. Since each member of the group is responsible for a different dish to bring to the group’s meetings, they have seen themselves grow as cooks. Mary Ellen, who is an avid cook, claims that bringing these two talents together is a satisfying and fulfilling pastime. Each member of the group has noticed that they have become multi-talented due to their participation in the group. “We enjoy it for the intellectual stimulation, the verbal translation and the realization that language is a living thing,” Christa says. “But most importantly, we enjoy getting together.”

The members of this group have become fluent in French and operate like a well-oiled machine, and their pursuit of understanding the language is what brought these close friends together. Because of the influence that celebrating the different cultures has on the group, some of the members have begun taking Spanish lessons to see what connections can be made in the future the same way that French made for them. speak French to one another to learn about the romance language.