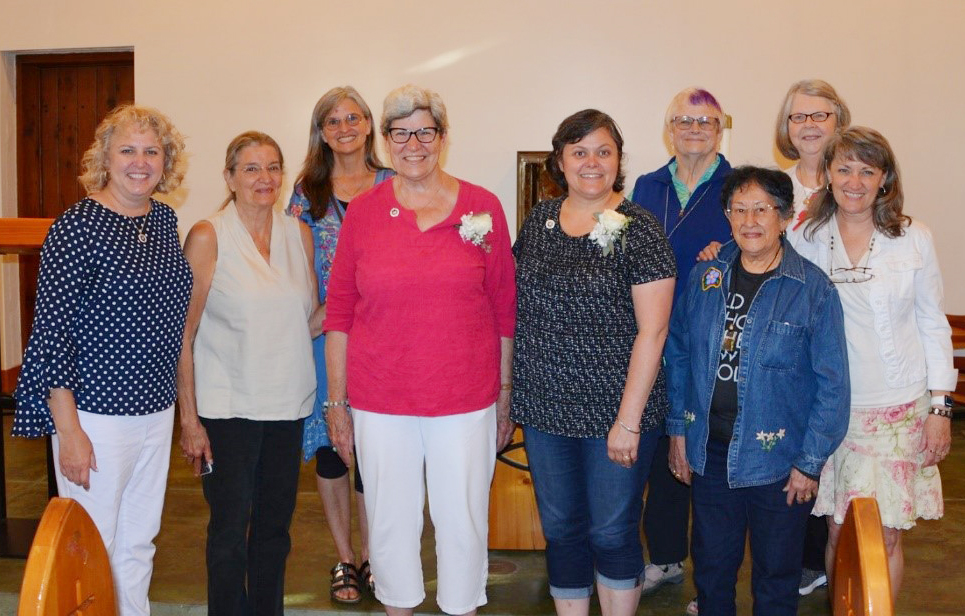 Bonnie Elder (fourth from left) made her commitment as an Associate to the Sisters of Charity in Juneau, Alaska, this summer.

Juneau, Alaska is more than 3,000 miles away from Cincinnati, Ohio, but the charism of the Sisters of Charity cannot be measured in distance. Such is the case of Bonnie Elder, a Juneau resident, who recently became an Associate with the Sisters of Charity to connect with her past and build relationships for the future.

Growing up with two aunts that were Ursuline Sisters, Bonnie had proper guidance to become a faith-filled woman of God from an early age. Not only did this mold her into the woman she would eventually become, but her 16-year education in her home state of Kentucky under the Sisters of Charity also played an important part in her life. Additionally, she witnessed the positive impact that serving others can have on oneself and others when pursuing a selfless life. She followed these lessons her whole life, including when Bonnie moved to Juneau and discovered other women also offering themselves to a mission not unlike her own. She discovered that these women were Associates to the Sisters of Charity and, feeling called to honor her past by living a life similar to her aunts, decided to become an Associate as well to build a better future. Bonnie says, “I’ve definitely met my share of Sisters, but the Sisters of Charity’s charism was special to me.”

While she currently serves as a lector for her parish, Bonnie hopes to involve herself more in her community to live out the Gospel values. Because one of her personal goals was to build relationships with the Associates of the Congregation, Bonnie has been open to begin new services with her fellow Associates. “I know how important friends are,” Bonnie says. “Serving with them makes that bond stronger.”

The Sisters of Charity have offered guidance to many throughout the years both in and out of the Congregation, but Bonnie feels a particularly strong bond with those who share her passion for the Congregation’s charism with her. The ceremony where she made her commitment as an Associate was a perfect example to her of how close the Community is connected to one another and how each member personally relates to one another. Linked by the charism of the Sisters of Charity, Bonnie mentions that understanding the mission statement was a vital component of her spiritual growth. “It’s a very large statement and it gives me an outline, sentence-by-sentence, on how I can improve my friendships and my faith,” Bonnie says.

Despite the distance from the Motherhouse of the Congregation, Bonnie still finds new ways to connect with others in the Community in her pursuit of a stronger faith and stronger friendships. Bonnie says that she hopes to return to her home state of Kentucky in the fall to connect with some of the Sisters of Charity and that she will always honor her aunts by living out a charitable future.