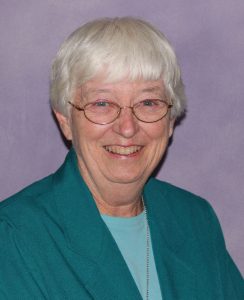 A native of Cincinnati, Ohio, Sister of Charity Maureen Heverin led a busy life before entering the Congregation by working as a switchboard operator and a receptionist at Xavier University in Cincinnati. However, as soon as she was accepted to Good Samaritan Hospital’s School of Nursing, she began to consider religious life. Entering the Congregation in 1959, S. Maureen attributes her decision to become a Sister to the generous spirit of the Sisters of Charity who taught at the hospital.

Though she studied nursing, S. Maureen began her ministry in education as a primary teacher and a junior high instructor at St. Brigid in Xenia, Ohio, from 1963-’65 and 1965-’68. She spent the next 10 years teaching at various schools across Ohio and briefly taught for two years at St. John the Baptist in Chillum, Maryland. These years of educational experience prepared her for her next mode of service where she worked with adults trying to earn their GED.

Maureen said, “The content learned and taught prepared me for the next 10 years when I taught adults in GED and basic education classes in Over-the-Rhine and in Winton Terrace [both in Cincinnati].” This experience also prepared her for her role as formation director for the Congregation from 1988 until 1994.

In 1995, S. Maureen began serving in the social work field at Welcome House in Covington, Kentucky. She went beyond the call of duty by working with the staff to open the Gardens of Greenup, which offered a residence to the families who had been homeless in the past.

Because of her skills in leadership, Sister was elected to the Leadership Council of the Sisters of Charity in 1999 until 2007, which she could only describe as a gift. She said, “I was able to meet and get to know more of my Sisters and learn about their ministries and lives. My sense of connection grew and my understanding of the bigger picture was heightened.” Sister also says that she met many colleagues, both professional and personal, that broadened her horizons and gave her a strong sense of community that was in keeping with the mission of her Congregation.

S. Maureen currently resides at Bayley House and serves as a spiritual director at the Sisters of Charity Spirituality Center. She also directs retreats at St. Clare in Cincinnati, Seton Hill in Greensburg, Pennsylvania, and at the Jesuit Retreat Center in Milford, Ohio. In addition, she is involved with the Ignatian Spirituality Project which offers retreats for women who are in recovery from addiction. She said, “My reasons for being a religious today are not the same as they were initially. I still feel a sense of call, which is a profound mystery to me. I am where God wants me to be and it is life-giving. Service and mission are pieces of the whole, but it is being in a community, living life with an openness to the Spirit, moving us into a new way of being that gives me life.”