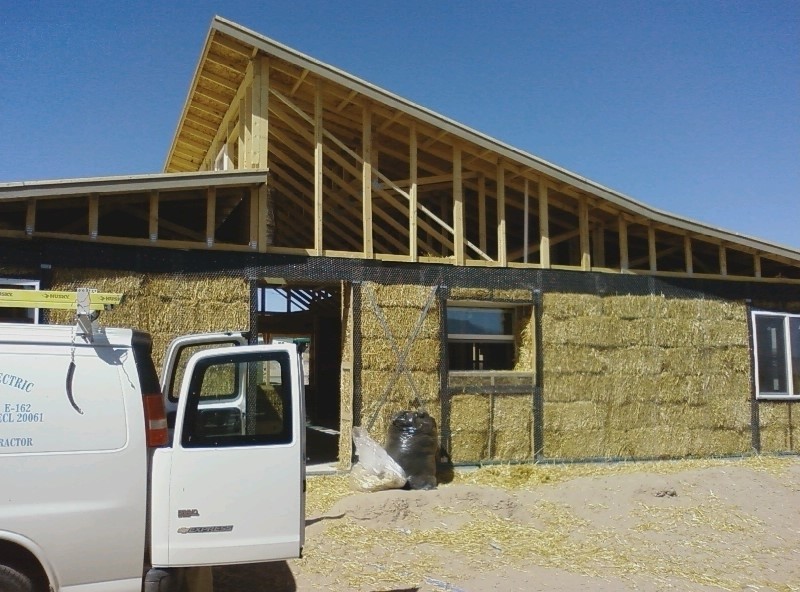 Tierra Madre uses straw bale for the walls of each of their 38 houses, which is practical for the inhabitants and protective of the environment.

Stewardship of creation has come at the forefront of many movements in the world, but saving the Earth is just as important as saving the people on it. Earth is home to all of humanity, but this doesn’t mean that all humans have a home to live in. Enter Tierra Madre, a social and environmental ministry in the mid-1990s that epitomizes all of the injustices that the Sisters of Charity of Cincinnati long to correct. Led by Sister of Charity Jean Miller and her companions from two other congregations, the trio was able to provide hearth and health to people on the U.S./Mexico border and the Earth.

Fresh off of ministering in war-torn Nicaragua in 1990, S. Jean had become well-aware of the environmental needs of Earth and how to find solutions using whatever resources were available. When it was time to move to her next ministry, S. Jean and her companions only knew that they wanted to do something environmentally friendly. With Sister of Charity of the Incarnate Word Jean Durell and Franciscan Sister Joan Brown, the trio decided to minister at the border. Before choosing a service, they asked the community in Sunland Park, New Mexico what the greatest need was for the under-privileged people living there. Housing was their response. “We wanted to become better stewards of creation, so we blended these two things together,” S. Jean says.

The living conditions in New Mexico were substandard; people were living in garages or basements of family members; if a family was lucky enough to find refuge in a trailer or house, they were labored with high prices and mortgages. With all of this in mind, the trio was initially unclear how to proceed. “We didn’t have money and we didn’t know how to get mortgages for residents,” S. Jean says. “So we contacted a realtor and an architect.”

The realtor was only able to find land in the middle of a desert. But where the world saw dry, barren land, the trio saw opportunity. With 20 acres of land, the Sisters began fundraising by writing grants and members of the community were selling tamales to begin the project. They hired an architect to determine the cheapest, most energy-efficient type of house. If the families helped build the houses, this would lower the cost for the residents even more. “We eventually decided on straw bale because it was cheaper, more beautiful and more sustainable,” S. Jean says. “Some of these houses were built in 1900 and are still standing today in Nebraska.”

Though durable, it was vital that the straw used to build these houses could not get wet because of the lasting damage it would have on the house. To combat this, rocks were used to keep the water at bay. And, because the houses are powered on solar energy, the positioning of these houses was critical. Though a view of the mountains was preferred, it would have been counter-productive for the energy needs of the house because the floor tiles would not be able to store the sunlight. “We did what was best for energy conservation rather than what was aesthetically pleasing,” S. Jean says. “In the end, people preferred the way the houses were built.”

Despite the promise of housing, some of the people in Sunland Park rejected the offer to live in these houses because of a cultural tradition in Mexico to own land, not just a house. The rented land owned by the state of New Mexico was usually rented for cattle grazing, which deterred many participants. However, this taught S. Jean a virtue that she uses to this day: patience. “Just when I was about to give up due to various financial struggles, we were given a $100,000 donation,” S. Jean says.

The timing was perfect and in 1995, Tierra Madre, or “Mother Earth,” received their 501(c)(3), or charitable organization, status. According to their original mission statement, Tierra Madre gave, “…an option for the economically poor and for the Earth [by] creating an intercultural and sustainable community on the U.S./Mexico border.” Newspaper Tree’s Kent Paterson referred to the community as an “ecotopia” that proved the best practice in poverty eradication is universal participation.

Just as things started to look up, so, too, were the number of people interested in the project. The growing community was led by the families living there, and an internal advisory board was established. This family-run board decided that the community would build a playground for the children while the adults were building their new homes. The playground was comprised of recycled materials like old telephone poles for the swing sets to entertain the youth. 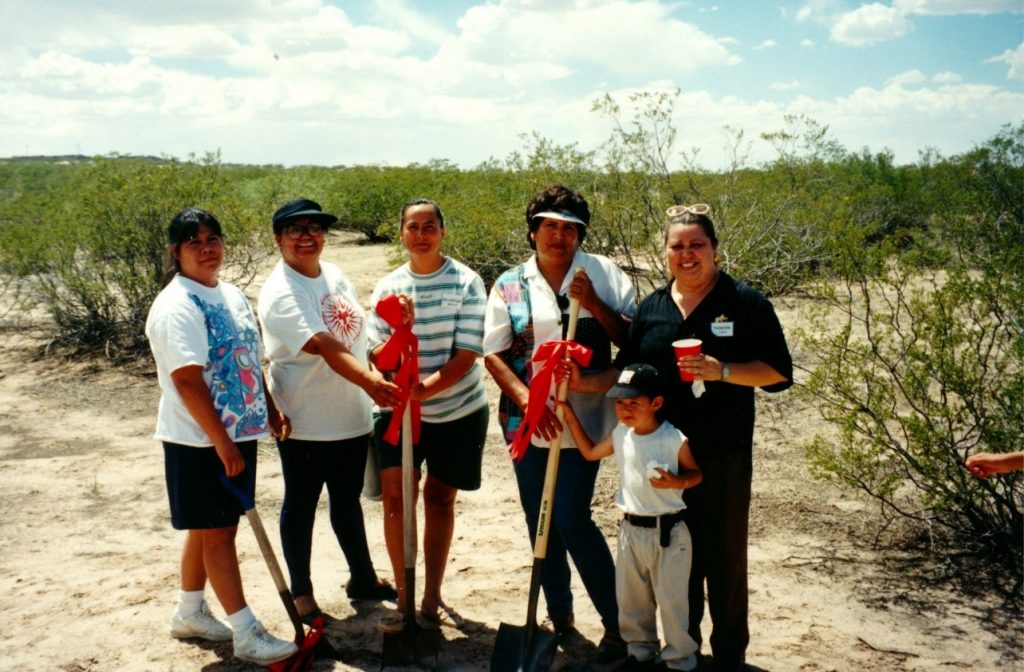 Members of the first five families living in Tierra Madre break ground and help build one of the energy-efficient straw-bale houses.

Because of a strict budget, the families of Tierra Madre had to compromise on the composition of the houses only to realize that the materials that they used were more efficient. An example of this is the wooden frame, which worked in the favor of the houses despite metal being preferred. Once they were created, chicken wire and stucco was laid over the walls to ensure stability. Their hands-on approach reduced the cost of labor and also made the house customizable for the residents. “The stucco came in different colors so each family picked the one they liked,” S. Jean says.

A testament to the durability of these houses could be seen in an incident that occurred during their construction. During the construction of one house, a torch accidentally lit the wooden frames. Petrified that the flammable straw would have burned the neighboring houses like paper, the community was pleased to find that though the frame burned, the straw only smoldered upon contact with the flame and withstood the duration of the fire before first responders arrived. “The only thing that happened to the houses next to it was that the windows cracked,” S. Jean says.

Not only was there a literal trial by fire, but there was also a trial by firearms. The land of the community was commonly used for bird-hunting, which prompted the Sisters to test the houses against ammunition. They were pleased to see that the rounds couldn’t entirely penetrate the wall. “When reporters came to talk about the houses, one of them joked that our only worry was the Big Bad Wolf,” S. Jean says.

When contractors inspected the land, they wanted to build up to 100 houses, but Tierra Madre only expected to build 47 to give the families space and land to call their own. When it came time for the appraisal, the contractors didn’t know how to price them because the houses were so unique. While the houses were being assessed, officials found that most expectations of the houses were met. Some of the appliances that were legally required to install in the houses weren’t used, like furnaces that were unnecessary because of the insulation of the straw bales. “The residents told us they hadn’t even turned it on,” S. Jean says.

Though the final goal of creating 47 houses was never fully realized, the 38 houses that were built became home to many. Due to the Recession in 2008, low-interest loans that made living in these houses possible were hard to obtain, making the project difficult to come to fruition. However, the houses stand tall to this day and none could forget the generosity of those that began the project. S. Jean was only ministering part-time and began focusing on her work full-time; S. Joan was called to another ministry before the houses were built; and S. Jean Miller left by the time 10 houses were built once she noticed that the community was self-sustaining. Her ministries took her to Colorado Springs, Colorado for justice work, but Tierra Madre remains a special place in her heart.