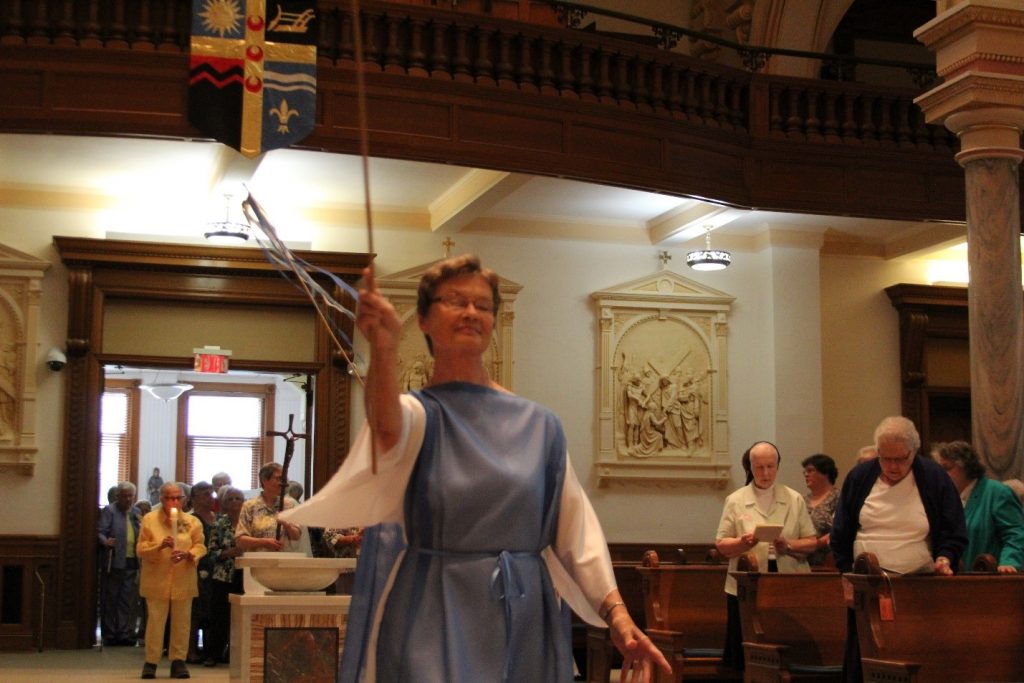 S. Mary Ann Humbert has been the biggest advocate for liturgical dance, sharing her talents in numerous Congregational and Jubilarian celebrations.

While a physical prayer can be difficult to find, these Sisters of Charity show that the best prayers are the ones that use words and body alike. Sisters of Charity Mary Ann Humbert, Annie Klapheke and Joyce Richter have used their talent for liturgical dance to bring joy to Mass and themselves by celebrating with their graceful movements.

In 1980, S. Mary Ann was in a spiritual direction program when someone passing her in the hall suggested to her to try liturgical dance. Though she had never considered it, she remembers vividly the way God was guiding her towards the practice that she continues to this day. She has since fallen in love with liturgical dance, first offering it at her own Silver Jubilee celebration and eventually becoming the coordinator for liturgical dance for other Sisters of Charity. She has been the figurehead of the practice for SCs because of her passion for the movements which spreads like wildfire. Not only have they grown spiritually from the practice, but they have developed deep-rooted friendships because of the shared prayer form. “We always pray before we dance that it will be a blessing and a vehicle for others’ prayer and entrance into the celebration,” S. Mary Ann says.

Annie began dancing at the young age of 5 when she began taking ballet lessons, which introduced her to the concept of liturgical dance. Her instructor taught everyone at the dance academy how to perform the Lord’s Prayer in dance form, which S. Annie continues to use to this day. Aside from being involved in a group of liturgical dancers at the University of Dayton, S. Annie did not use her talents again until she offered to dance at the 2015 Chapter of the Sisters of Charity. “Ever since then, Sisters have invited me to dance at special liturgies at the Motherhouse,” S. Annie says. 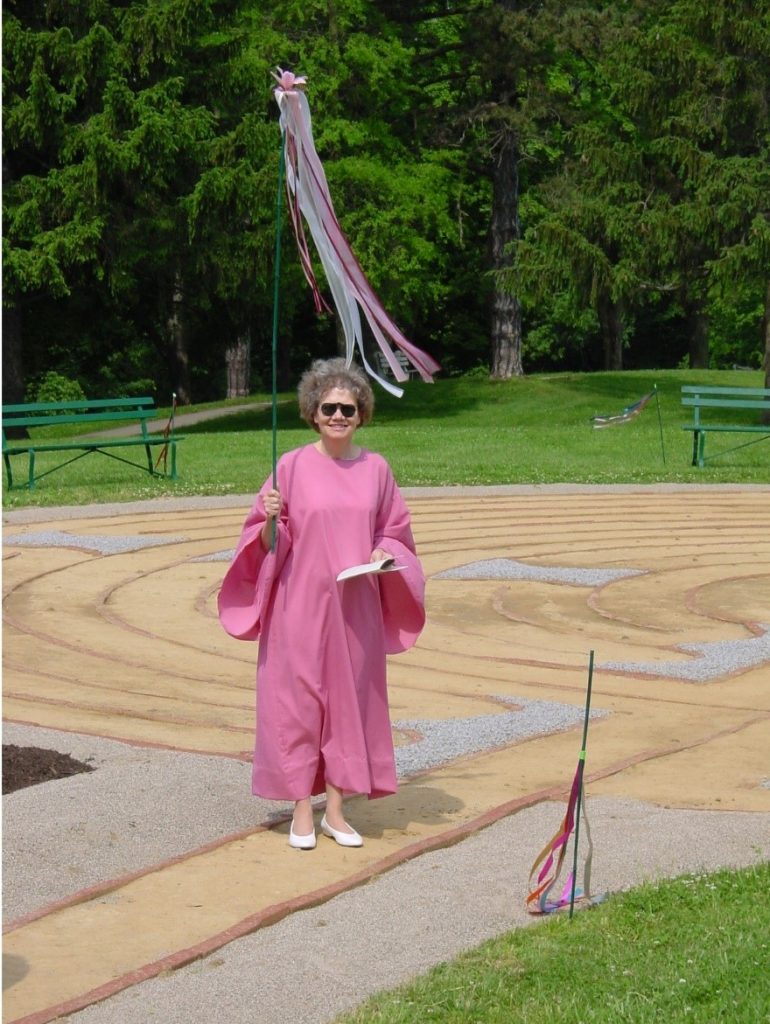 S. Joyce Richter says that liturgical dance is as much about prayer as it is about movement.

As a lover of dance since the beginning of her life, S. Joyce has a six-year background in tap dancing and a general passion for physical expressions of music. She has always enjoyed any kind of movement, but rehearsing for liturgical movement was an experience that she loved. By the suggestion of S. Mary Ann, S. Joyce first took an interest in the 1990s when the two attended a two-week dance workshop and she learned the movements to various songs and hymns. When she took a class with Joanna Macy who performed a dance called the “Elm Dance” she was further prompted to pursue liturgical movement as a prayerful way to celebrate life. When she received a request to teach a break-out session in liturgical dance at a Chaplains Conference in Cincinnati, she and S. Montiel Rosenthal responded eagerly with a group of 10 dances that they taught the participants. “They totally enjoyed the dancing and we enjoyed teaching them,” S. Joyce says. “What a privilege it was to introduce this type of prayer to the chaplains.”

Because these dances are sacred movements, they are only featured at Masses and special prayer celebrations about four times a year during important events in the Community or the Church calendar. However, the few times they are performing the movements make it worth the wait. The first dance that S. Annie learned, the Lord’s Prayer, remains her favorite because of how it encapsulates the Christian faith. Like any skill for a Sister of Charity, it has since evolved into its own ministry, as S. Annie has begun to use sign language for the Church-goers. Members of the Congregation who have previously ministered in places like St. Rita’s School for the Deaf have found her sign language flawless, despite S. Annie’s lack of experience with it. “I do not know sign language, but a Sister gave me a book of signs,” S. Annie says. “When I am asked to dance to a particular song, I use the book to look up the sign for each word in the lyrics, and then create a dance using the signs.” 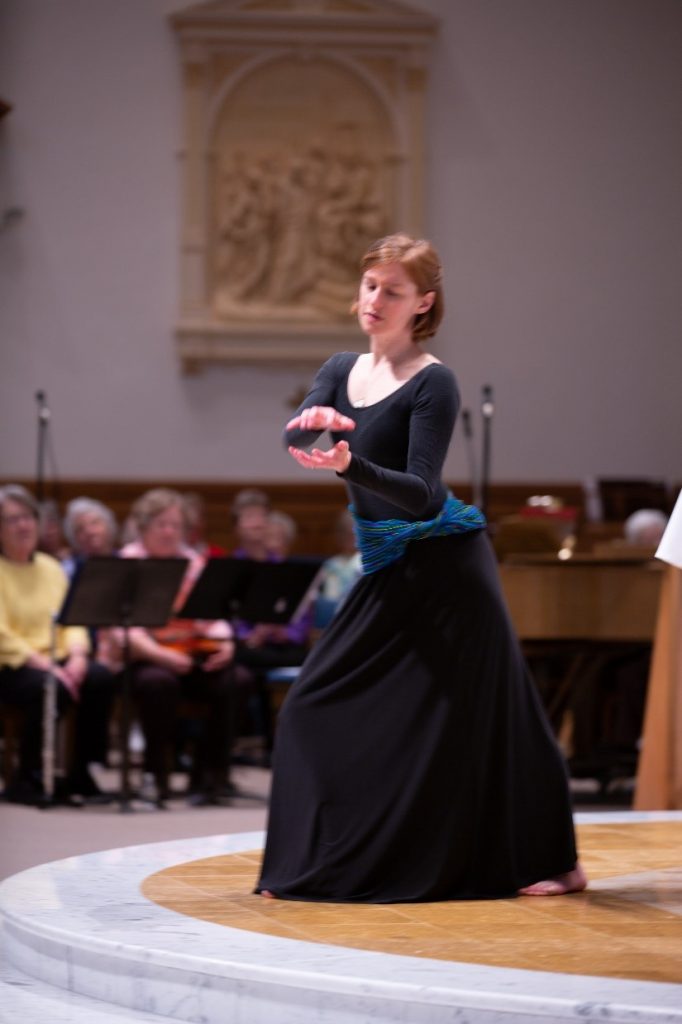 S. Annie Klapheke is one of the liturgical dancers who uses sign language in what many participants call a “physical prayer.”

Quoting the Acts of the Apostles, S. Annie recites, “In God we live and move and have our being” (Acts 17:28). The liturgical dances are based on prayers and songs featured in Mass; as such, the dancers often refer to it more as a prayer form than as a dance or artistic outlet. Dancing to the prayers and songs of Mass allows S. Joyce to remember and focus on each word because she has to liken it to the next step in her dance. In these moments, she has the ability to rediscover some of the oldest prayers that she knows and revitalize their meaning. “I appreciate the ability to pray with my whole being as well as my words,” S. Joyce says.

Dance is often used as a mode of celebration and these Sisters of Charity demonstrate that some of the best prayers come from physical expression. Though the opportunities to use these talents happen only occasionally, this enhancement to the liturgy is always welcomed by those in attendance.