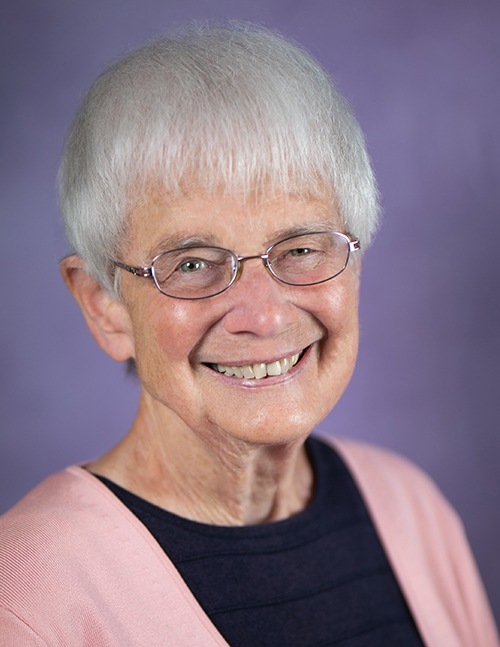 Cathy earned a Bachelor of Science degree in education from the College of Mount St. Joseph in 1965 and a master’s in English from John Carroll University in Cleveland in 1975. She earned a degree in transpersonal psychology in 1987 from the California Institute of Psychology, Menlo Park, California.

The second half of her ministry years took her in a new direction. From 1985-’87 S. Cathy became a full-time student of transpersonal psychology; upon completion of the degree in counseling she accepted a position with the Bay Area Addiction Research Treatment Clinic in San Francisco, California; the clinic offered medical and counseling services for 600 heroin addicts as outpatients. She advanced to administrative supervisor and operations director and by 1996 she was serving as an internal auditor responsible for quality assurance, and county and clinic policies/procedures.

Cathy felt great satisfaction in being able to help people in San Francisco during the AIDS crisis, prior to the use of inhibitors for HIV+ persons. “Most patients have multiple substance abuse problems and many suffer from dual diagnoses, including mental disabilities,” she shared at the time of her Diamond Jubilee. Her own inclusive Catholic parish, Most Holy Redeemer, lost 40 percent of their community during the AIDS crisis. She grieved the loss of so many vibrant, contributing persons that she had come to know and love. Throughout her 30-plus years of living in the San Francisco area, S. Cathy was very involved in parish life. She served on the RCIA team and the Formation-Education Commission early on at Most Holy Redeemer. She facilitated a Centering Prayer group for more than 25 years. She, personally, provided experiences to help others deepen their relationship with God through contemplative retreats, speakers’ series and inter-generational dialogue.

Travel, sightseeing, hiking and mountain climbing were favorite past times for S. Cathy as well as special times with good friends. Another highpoint for her was the SC Centering Prayer Group she was a part of. The group first formed in the 1980s and four of the original members continue today with five already transitioning to heaven.

Nancy Bramlage saw herself as one of the many Sisters of Charity who enjoyed some great experiences of hospitality in the Bay Area. She shared, “When I was on sabbatical in Berkeley, Cathy was so eager to have me see places like Point Lobos and Half Moon Bay that she loved. This included her parish in San Francisco where she had made so many friends over the years. She loved California and the natural beauty all around her and the freedom and the care for one another that was deeply rooted in the people there.”