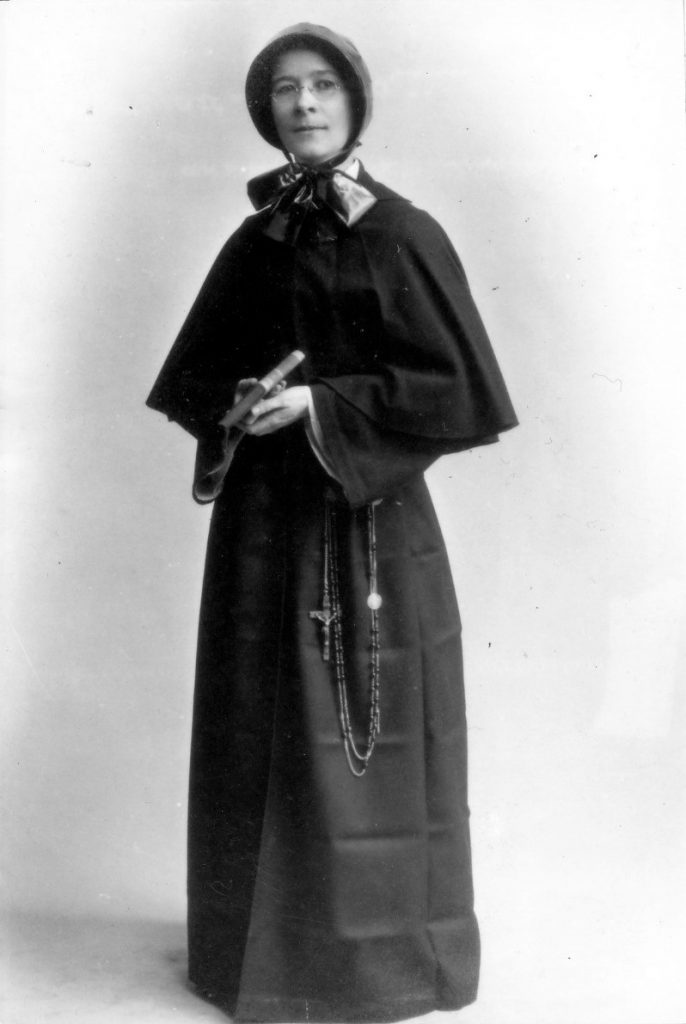 Sister of Charity Leonita Mulhall is noted as the first dean of what would one day be Mount St. Joseph University due to her initiative to transform the academy into a college.

As Mount St. Joseph University nears its centennial anniversary, the Sisters of Charity reflect with gratitude on the initiative that it took to make this institution the heart of Delhi that it is today. This initiative is best illustrated by Sister of Charity Leonita Mulhall, whose dedication to education helped foster what was once an academy into a 100-year-old institution.

Leonita entered the Sisters of Charity on Feb. 28, 1897. From her earliest ministries, she focused heavily on the values of education in various schools throughout Ohio, such as Holy Angels in Sidney and St. Raphael in Springfield. However, her passion for education reached its peak while on the premises of the Sisters of Charity Motherhouse where she applied all of the skills that she learned over the course of her ministries when she became the director of Mount St. Joseph Academy.

In order to prepare students for a college career or obtaining a teaching license, post-graduate courses were offered. However, when a student went to procure her teaching license in her home state of Indiana, they refused to give it to her because of her “unverified postgraduate credits,” according to SC Archivist Veronica Buchanan. S. Leonita oversaw the application process with Ohio inspectors on their school’s postgraduate credits. When the academy was accredited in 1920 for its postgraduate credits, one of the inspectors said there was potential for a four-year college, which he strongly urged.

After learning this information, S. Leonita pursued the status of college with vigor and she drafted a charter that was eventually approved on Feb. 26, 1920. Her position grew from principal of the high school and elementary school to the dean of the new college, making her the first dean of the institution. The first class of college students was accepted in September of 1920; this began a tradition of dynamic education and career readiness that the institution is defined by today.

Stepping down from the position in 1925, her leadership was eventually succeeded by S. Agnes Loretto McCann. Her ministries in education took S. Leonita to St. Mary High School in Lansing, Michigan, but she eventually became the superintendent of parish schools of the Archdiocese of Cincinnati in 1931 while serving at the Motherhouse, the same year she earned her Ph.D. in administration from the University of Cincinnati. Her commitment to education was transcribed when she authored multiple history textbooks for grades five through eight after receiving an offer from esteemed publishers the Benziger Brothers. S. Leonita continued to write textbooks for the next decade of her life, inspiring generations of students to come.

In one of her remaining written documents from 1935, S. Leonita demonstrated her innate passion for the institution beyond her years as the first dean. In her letter addressing the Sisters of Charity, S. Leonita asked for an expansion to the College of Mount St. Joseph by requesting a new building due to an increase in student enrollment. To do this, she sought the involvement of any and all former students that would be willing to offer any aid they could. “To you we say that we wish to organize the students of the Sisters of Charity – in other words, the pupils who, at any time, have been taught by the members of our Community – not only for our purpose but for their benefit,” S. Leonita wrote. Her efforts were not in vain, but the move from the Motherhouse to its current premises took place after her lifetime in 1962.

Her death on Nov. 22, 1945 marked a mournful day for the Sisters of Charity as well as the soon-to-be university, but her efforts during the early stages of development would go on to change lives for 100 years. The value she placed on education has been woven into the fabric of the institution that was built to risk a caring response.