The Heartbeat of the Earth: The Drum Circle of the Sisters of Charity 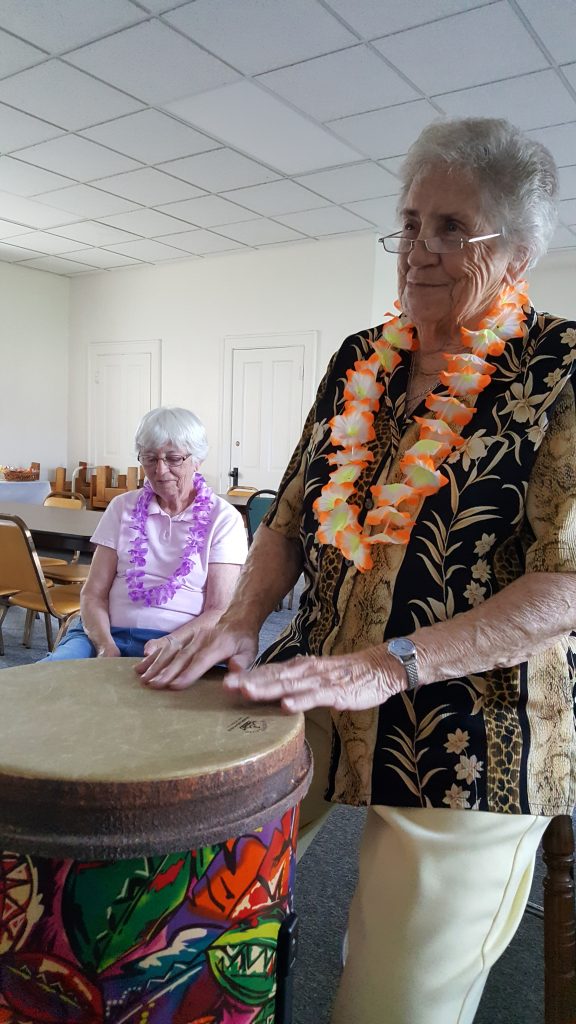 The drum is the most universal instrument in the world, appearing in almost every culture around the world in some variation; it is spotted in ceremonies of worship and celebration, but the best part is that anyone can play. According to Sister of Charity Shirley Le Blanc, who founded the drum circle for the Congregation four years ago, the drum circle is perfect for those who want to get in touch with their inner selves, explore other cultures and invoke a spiritual awareness.

After ministering as an NGO for the united Nations, Sister of Charity Caroljean (Cj) Willie had become acquainted with the different cultures around the world and some of their unique ways of using drums for praise and ceremonies. Inspired by the rich diversity, S. Cj requested that a drum circle be created, a task which drummer S. Shirley fulfilled after some research on the traditions around the world. S. Shirley has been drumming for 30 years for churches and choirs, making her the ideal choice to spearhead the program. Four years later, the drum circle boasts an impressive 33 attendants and a rhythm that is both unique yet communal. “Because of my love for drums, I was eager and I just flew with it,” S. Shirley says.

One of the first practices that takes place in the drum circle is understanding the natural noises and tunes of the body, like the heart – often called the drum within the chest – and the breath – the rhythm of life. A typical meeting for the drum circle involves drumming to the sounds of other music. Despite this music playing, S. Shirley encourages others to match the beat of their hearts. S. Shirley says that even when the participants stray from the overarching rhythm, they are still gaining from the experience because they are expressing themselves freely and creatively which has a therapeutic effect on the drummer. As S. Shirley says, “We aren’t big drummers but we play from our hearts and we have fun doing it.”

When celebrating their fourth anniversary over the Memorial Day weekend, the drum circle played to the national anthem and paid homage to the u.S. Armed Forces for their service by playing along with “The Army Goes Rolling Along” and “The u.S. Air Force” among others. 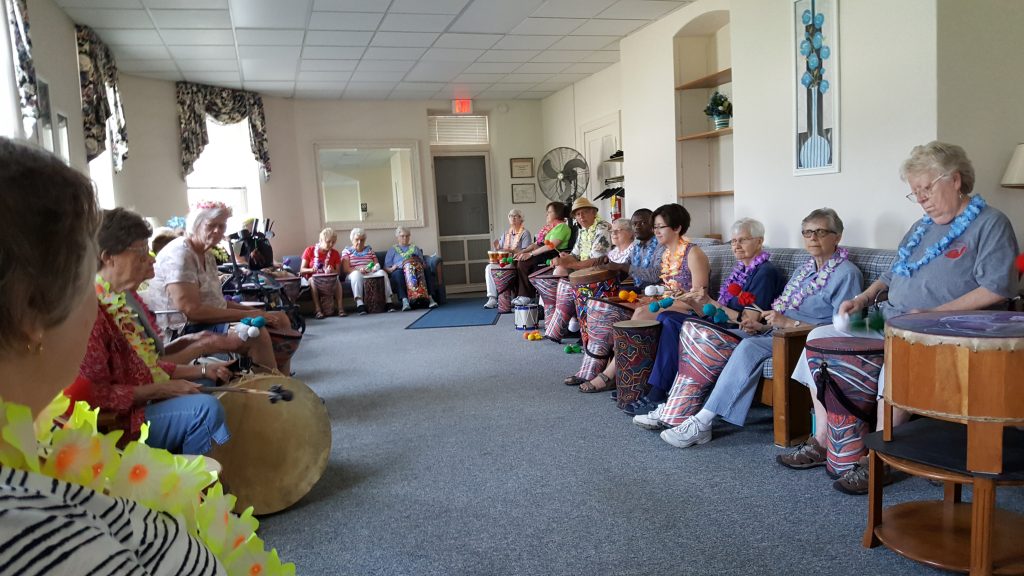 The Sisters of Charity drum circle gathers to create music and memories with each monthly meeting.

But because it was founded through the united Nations, it comes as no surprise to see that the drum circle celebrates diversity and different cultures of music. For example, the group will incorporate Native American rhythms into their hour of playing while also honoring the various African traditions. When celebrating these different cultures, the drum circle uses a wide array of different drums from all over the world, like the more commonly seen woodblock and tambourine or the exotic tubano, djembe and darbuka drums.

Native American rhythms are among the many favorites of S. Shirley because it demonstrates how the drum circle mirrors the feelings of prayer and spiritualism in each drummer. To enhance this spiritual experience, S. Shirley will often hold the drum circle meeting outside to connect with the chirping birds and ruffling leaves.

S. Shirley is happy to share her passion of,drumming with others on the last Saturday of each month. She says that there is a tendency to express ourselves through drums, as people can be seen tapping their feet or marching to music that they like. While the participants enjoy being able to express themselves and broaden their horizons, S. Shirley looks at it as an opportunity  to share her passions with others and to prove, as she says, that there is a little drummer in all of us.hat Spirit brings joy and life to the Sisters in MMH.