Vocation in Avocation: Piano and Organ 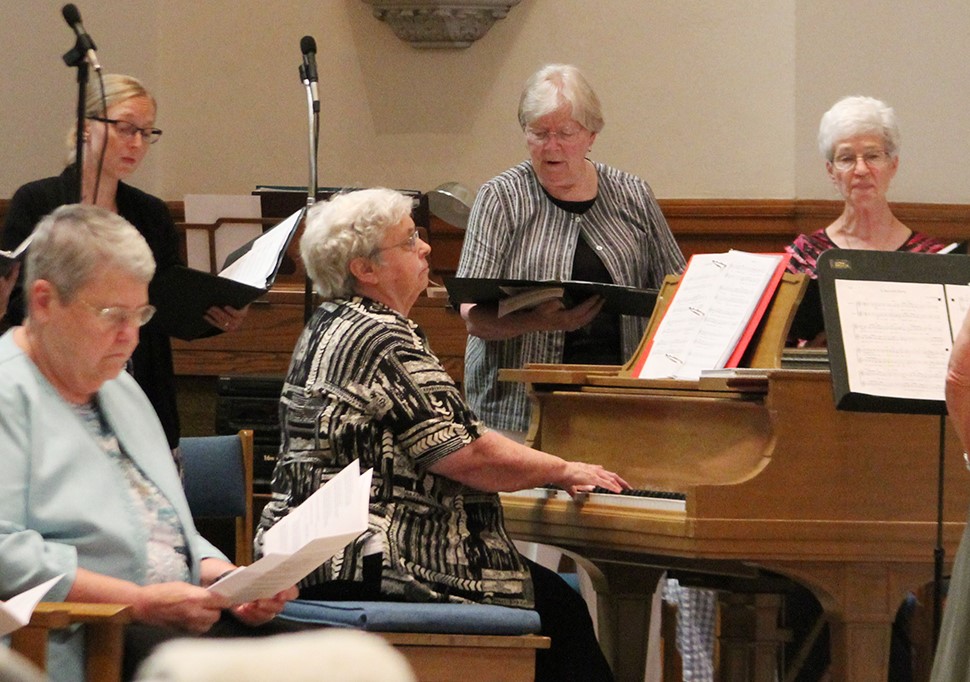 S. Mary Bookser (center) plays the piano for Mass, but says music is more of a ministry than a performance.

For centuries, the piano and organ have been vehicles of music in churches around the world and have become almost synonymous with prayer at Mass. Sisters of Charity Mary Bookser, Marge Kloos and Joan Wessendarp, all musicians and music enthusiasts, have played these instruments not just as a way to create beautiful music, but for the fulfillment of their souls.

Mary discovered at a young age that she had perfect pitch for piano and, coming from an already musical family, began taking piano lessons at the request of her father. In addition, S. Mary began to play the organ in the seventh grade when her parish needed an organist to play at Mass. When she wasn’t playing for Mass, her family would gather and sing or play music together on their different instruments, like her father who would play the trumpet. When she became a Sister of Charity, S. Mary became involved in musical education to share her passion with the beloved art form. “Music isn’t just a hobby to me,” S. Mary says. “It’s a part of my being.”

Similar to S. Mary’s experiences, S. Marge began playing piano at 4 years old because of her musically inclined mother. She began to take formal lessons at age 6, but was approached at age 10 to play the organ for her parish. Though it was during the transitional phase of Vatican II, S. Marge became familiar with the music quickly and viewed it as a ministry even at that age. She continued to play through college, even performing at a coffee house to play jazz and blues pieces. Music also granted her various opportunities, even managing to play on national television for Good Morning America on a Bösendorfer, a rare and prestigious brand of piano that S. Marge says is her favorite to play. “Music is the greatest gift in my life,” she says. “It’s been a total part of my soul since before I was born. I know I was consoled by music when my mother would play for me.” 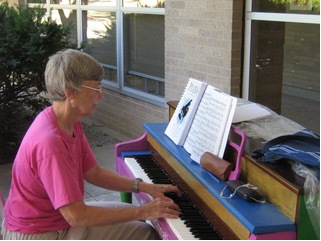 S. Joan Wessendarp has been playing the piano and organ since she was in the third grade and her prayer has become embedded with each note she plays.

Violin, clarinet and organ were just some of the instruments that S. Joan played, beginning in third grade, as she felt the ministry of music calling to her. S. Joan’s organ instructor, Sister of Charity Dolores Johnson, once received a note from S. Joan’s mother who said that at age 6, S. Joan wanted to do two things before she died: drive a car and play the organ in her church. S. Joan finds a certain amount of freedom in all forms of music, but piano and the organ provide a certain reverence that no other instruments can do for her. “Sometimes I feel like God plays it all through me,” S. Joan says. “It’s one of God’s greatest gifts to me.”

To this day, these Sisters offer their talents to their parishes to enhance prayer at Mass. S. Mary also offers her services to funerals and Congregational days at the Motherhouse. Outside of celebrating the Eucharist, the Sisters play the piano for fun without limiting themselves to a certain genre. For example, S. Mary enjoys playing liturgical music, folk music and a wide variety in between. Improvising keeps their talents sharp and refined as they try to exceed their limitations and test themselves with new and challenging pieces of music. “The piano is sensitive,” S. Joan says. “I can tell it what I want to do. It can be quiet and peaceful when I need it to be.”

The Sisters agree that sharing their music talents is one of the best ways to bring praise to God and joy to themselves. They consider their talents as a ministry more than a performance because they are helping others in prayer, including themselves, through one of God’s greatest gifts. “I almost consider music to be ecological,” S. Mary says. “All of creation, music included, is connected through God’s spirit.”

For these Sisters, music is more than just an avocation; it’s a way to connect with their core in a way they don’t find anywhere else. With their music as their prayer, they hope that those who listen to the music are inspired and will allow it to nourish their souls.