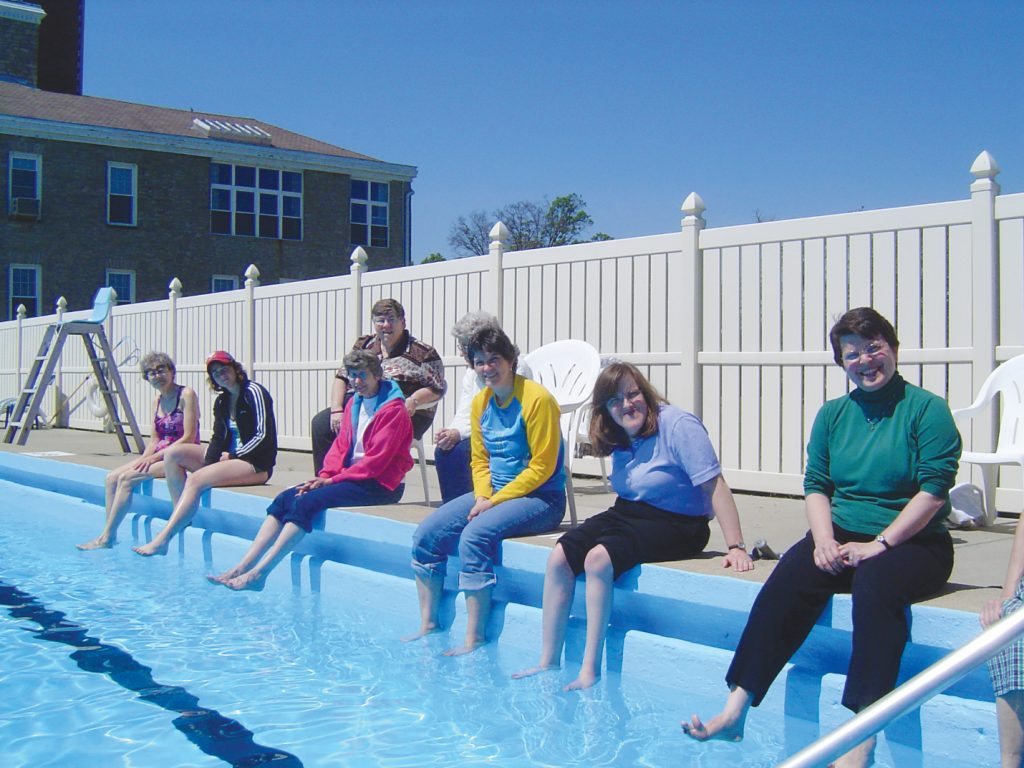 While many of the Sisters enjoy their time alone to exercise, they also enjoy the company of others during the warm summer months.

Summer has come and gone and many are regretfully packing their swimsuits away for the season. For many of the Sisters of Charity, swimming has become a healthy form of exercise and a fun way to relive memories of leisure from their days as children. Though the trees are ablaze with the leaves of autumn, the Sisters still dream of the next sunny stretch when they can exercise their bodies and faith while in the water.

Sister of Charity Dorothy William Englert is one of the Sisters who swims regularly and remembers her first experiences with water. S. Dorothy distinctly remembers visiting a pool only five minutes away from her home and her frequent trips to the Ohio River with her cousins. An all-day affair, S. Dorothy and her cousins would visit the river after a mile-long walk, bringing only their blankets and a lunch for the day. Enjoying each other’s company and the swift current of the river, the group would stay riverside until late afternoon, often marked by the appearance of the Coney Island riverboat, the Island Queen. “When we saw the Island Queen, we knew it was about time to leave, but it was a great way to spend the day,” S. Dorothy says.

Another frequent swimmer is S. Joyce Richter, who began swimming with her four brothers and her parents at a young age. Though her family would not go on vacation, they would make regular trips to LeSourdsville Lake Amusement Park in Middletown, Ohio, where they would spend their day swimming. This was an early-instilled passion that S. Joyce would carry for the rest of her life. “I would be able to use the indoor pool in Withrow High School in Cincinnati, Ohio, as a kid and I was also able to use the pool at Norwood Waterworks. Both the Withrow and Norwood pools also had free swimming and lifeguard lessons,” S. Joyce says. “[Swimming] was one of the things I did most often and still do. I had a different place to swim on different days of the week. I still look for the outdoor pools when I am out of town during the summer.”

At age 5, S. Joan Deiters began her life in the water, but she didn’t learn the variety of strokes until she was 13 years old at summer camp. Learning these different strokes encouraged her to continue the hobby. When the SC Motherhouse opened up their swimming pool, S. Joan was ecstatic. During her time of ministry at Vassar College in Poughkeepsie, New York, S. Joan discovered that the water could be used to challenge herself to grow in a spiritual and physical way. “I was taught that when you swim laps all you have to do is add two laps each day,” S. Joan says. “I could swim up to a mile. It brings me vigor.”

“My earliest memory of swimming is a family camping trip at a lake in Virginia when I was 7 or 8 years old,” says S. Joan Cook. “My dad taught me to float on my back, and he stood right there by me as I stretched out and looked up at the amazing blue sky. I loved it!” Growing up with a public pool only a block from her house, S. Joan says that she practically lived in the pool during the summers. These fond memories convinced her to swim competitively in swim meets and synchronized swimming programs through various institutions. To this day, S. Joan uses the Motherhouse pool, but in the other three seasons she finds herself swimming at the Mercy Fitness Center.

Nowadays, S. Dorothy swims by herself for the exercise. Practicing different strokes and dives, S. Dorothy usually spends up to half an hour swimming at the pool in the afternoons during the summer months. Besides the fun of the hobby, the benefits of the exercise further motivate S. Dorothy to keep swimming. “Swimming is the best exercise for using every part of the body without putting too much stress on the muscles,” S. Dorothy says. “It also increases your lung capacity.”

Joan Cook enjoys being able to swim and admires the great outdoors when she floats on her back, but she is also used to the vigorous exercise involved with swimming. In fact, this hobby served her well in preparation for her recent knee surgery. “The exercise gave me a head start, strengthening my leg muscles so I was ready to begin physical therapy as soon as possible,” says S. Joan.

“The ease of moving in every direction and freedom from gravity is such a unique experience,” S. Joan Deiters says. Feeling free in the water and unrestricted by motion, S. Joan notes that the exercise goes hand-in-hand with the experience of meditation as she is brought to a space where everything has slowed down and her mind is opened.

As with most hobbies for the Sisters of Charity, there is a degree of spirituality to be found in swimming. Oftentimes, S. Dorothy finds herself singing hymns to herself when she is swimming her usual seven to eight laps a day. Acting as an invigorating exercise and meditative state, other Sisters, like S. Joyce, spend their time in the water exercising body and spirituality by swimming on their backs and peering up at the white clouds. “I can see God in nature, in the clouds and in the quietness of the water,” S. Joyce says.

Whether for exercise or nostalgia, these Sisters of Charity agree that swimming is at the forefront of experiencing nature and celebrating the sunshine. These Sisters will be taking broad strokes towards the future as they wait for the time when they can swim outdoors again.