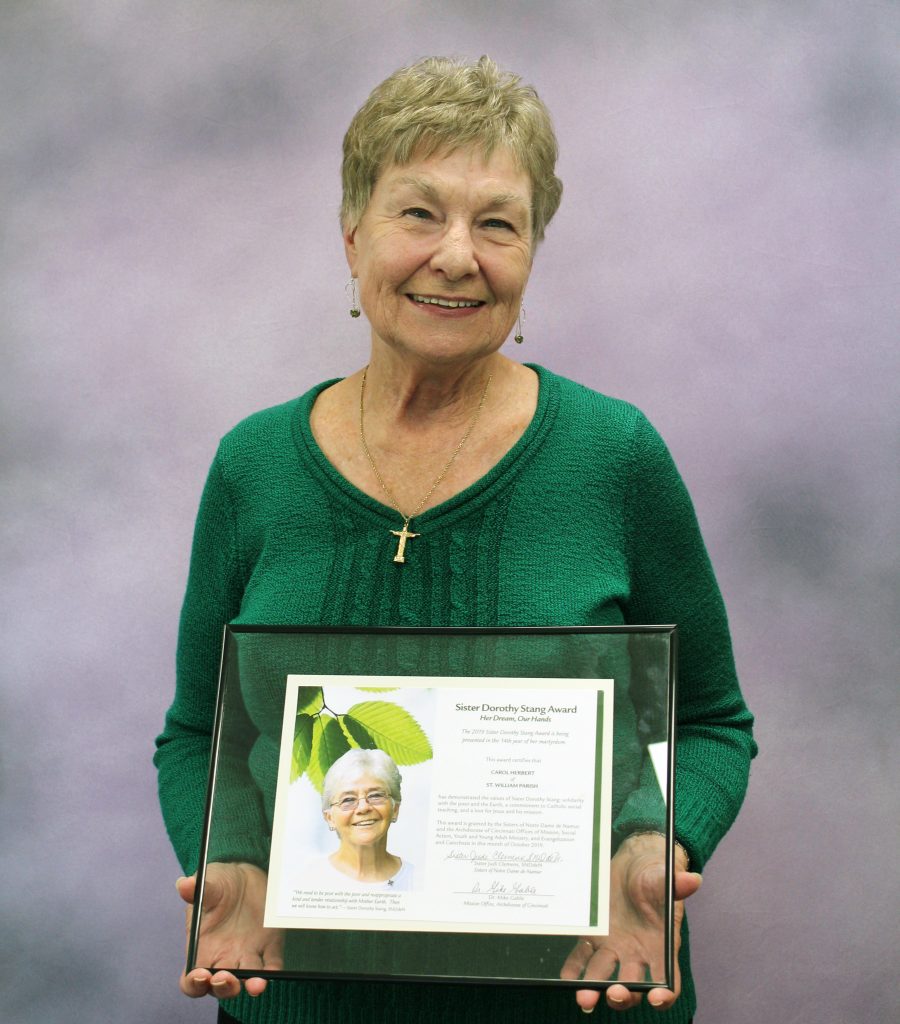 The Beatitudes have provided a sound guide for how many live their life to serve God, but few people demonstrate the ability to meet each of the eight points mentioned. However, Associate to the Sisters of Charity Carol Herbert has made these eight teachings her mission to follow and her efforts have not gone unnoticed. Recently honored with the S. Dorothy Stang Award, named after the late Sister whose last words were the Beatitudes, Carol demonstrates a tradition of service that the Sisters of Charity represent while honoring the name of the martyr S. Dorothy.

The S. Dorothy Stang Award is given to an individual who embodies the values similar to those of S. Dorothy Stang, a Sister of Notre Dame de Namur from Dayton, Ohio, who was known for her missionary work in South America. Combatting the issues of poverty, the late S. Dorothy was murdered during her ministry in Brazil in 2005 because of her service. Since then, the “Angel of the Amazon” has been commemorated with an award named after her that celebrates those who, according to her congregation’s website, display, “solidarity with the poor and care for the Earth and/or application of Catholic Social Teaching in cross cultural service or teaching ministry.”

One of the most recent recipients of this award is Carol, who first met the Sisters of Charity through her work in the early years of the SC Communications Office alongside Sisters of Charity Judith Metz, Mark Newman, Helen Flaherty, Betty Finn and Dolores Maureen McDonald. More than coworkers, Carol considered all of them friends and inspirations. Acting on her already strong faith, Carol became a member of the St. Vincent de Paul Society in 1983 and made her commitment to become an Associate of the Sisters of Charity in 1989.

Carol is still involved with these communities, as well as serving as the president for 17 years of the St. William Conference and has been vice president ever since. She was also on the Conference Life Committee and on their Board for six years. However, her service mostly consisted of creating a food pantry with other members of the community that began in the basement of the parish center at St. Vincent de Paul Society. Carol was pleased to watch the food pantry grow from a basement-operated service. “I really enjoy my service with these institutions because we respond to as many needs as possible,” Carol says.

She was honored with numerous awards throughout her life for her faith and dedication to others. One priest who served with her, Father Philip Seher, asked if he could submit her name as a nomination for an award. Carol reluctantly agreed, not knowing what award she was being nominated for or if she would receive it. Unbeknownst to her, her nomination would earn her the S. Dorothy Stang Award. Honored on Oct. 19, 2019, Carol was moved when she learned about the mission work in which S. Dorothy was involved. “I had heard her name before, but I didn’t know much about her lifestyle or missionary work,” Carol says. “But I was deeply moved when I learned more about her.”

Faith has been at the forefront of Carol’s dedication to others. Serving the poor, clothing the naked and following the other Beatitudes have been her goals all of her life, but her involvement with the two institutions has given her the capability to adequately serve. “I’ve been involved with the Vincentians and the Sisters of Charity for so long that I don’t know who I am without them,” Carol says. “Through my service with them, I live the Beatitudes, which is the best way for me to live.”

Carol is humbled to receive such an honor and to be associated with a name as esteemed as the late S. Dorothy Stang, but she says that she will continue her service with more vigor than ever due to receiving the award. She ensures the health and nutrition of the poorer communities through her service at the food pantry while fulfilling her own spirit, the spirit of S. Dorothy Stang, and the spirit of the Sisters of Charity.