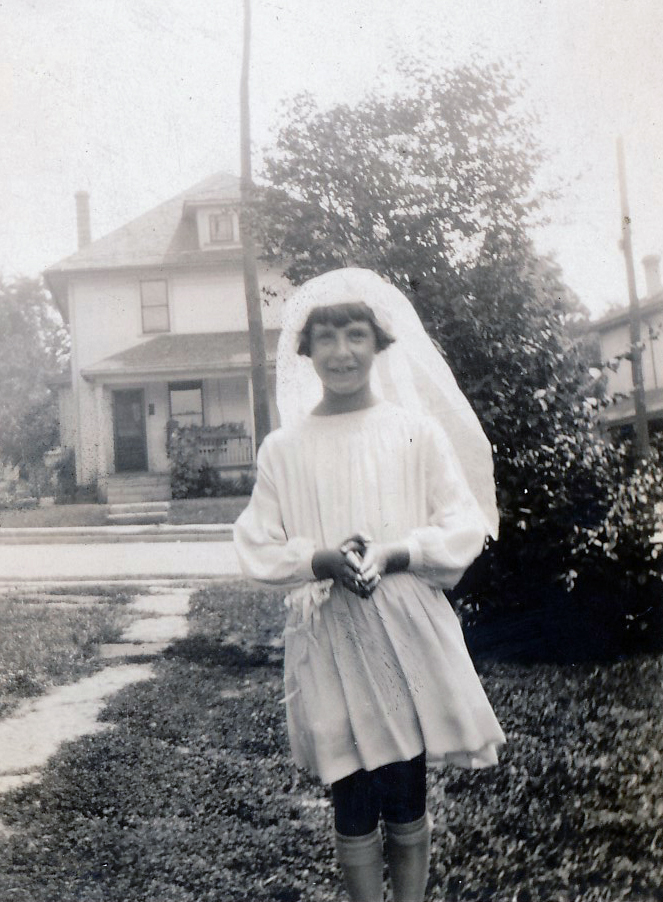 The secret to living a long, healthy life is a question asked by many, particularly as they age. Some will tell you much of it lies in eating well, exercising, or getting plenty of sleep. But for S. Bernadette Kambeitz, the oldest living Sister of Charity in age and in years as a Community member, the key to living a long life can be found in travel, embracing change and building loving relationships. On Dec. 13, 2019, S. Bernadette will celebrate 100 years of life. Those who know her can certainly affirm that she has reached this centennial milestone by being her joyful self and sharing that light with all those she has walked with through the years.

Born and raised in Springfield, Ohio, S. Bernadette was the oldest child of Albert and Elizabeth Kambeitz. She and her sister, Martha, attended elementary school at St. Joseph’s and high school at Catholic Central where they were taught by the Sisters of Charity for all 12 years. S. Bernadette fondly remembers riding her bike past the convent as a little girl and witnessing their joy. What they had, she wanted, and following her high school graduation in 1937, S. Bernadette entered the Sisters of Charity of Cincinnati at the age of 17.

Travel
Bernadette earned her degree in education from The Athenaeum of Ohio in Cincinnati, graduating in 1942; thus began her 30-year education ministry teaching chemistry, physics and math in schools throughout the Midwest and West. Sister acknowledged the opportunities the Community provided her in those years, teaching at schools in Ohio, Michigan and New Mexico, and credits those ministries as life-giving as each afforded her a broader perspective of the world and opportunities to create deep relationships with those she met.

It was while teaching catechism on Sundays to 50-plus high school boys at a Native American school in Albuquerque, New Mexico, that S. Bernadette met Chester Blackhorse. She felt called to look after the young man and one summer decided to send him home to Ohio for a different experience. Her sister, Martha, and Martha’s husband, Joe, provided a loving home for Chester that summer and the kindness was never forgotten. To this day S. Bernadette still keeps in her possession letters from Chester as he updated her on his life path and expressed gratitude for having her in his life.

Embracing Change
Bernadette once said that her life has been characterized by a never-ending series of changes, changes that steered her into three different careers. While she certainly met a lot of challenges along the way, the changes, she felt, encouraged her to grow and reach her potential.

In September 1974, after 30 years in the field of education, S. Bernadette began 15 years of service in the Radial Immunoassay Lab at St. Joseph Hospital in Mount Clemens, Michigan. It was there that she met Denise Donahue. The pair quickly became close friends, and as Donahue explained S. Bernadette was close with all of the med-techs in the lab, the matriarch of the group. 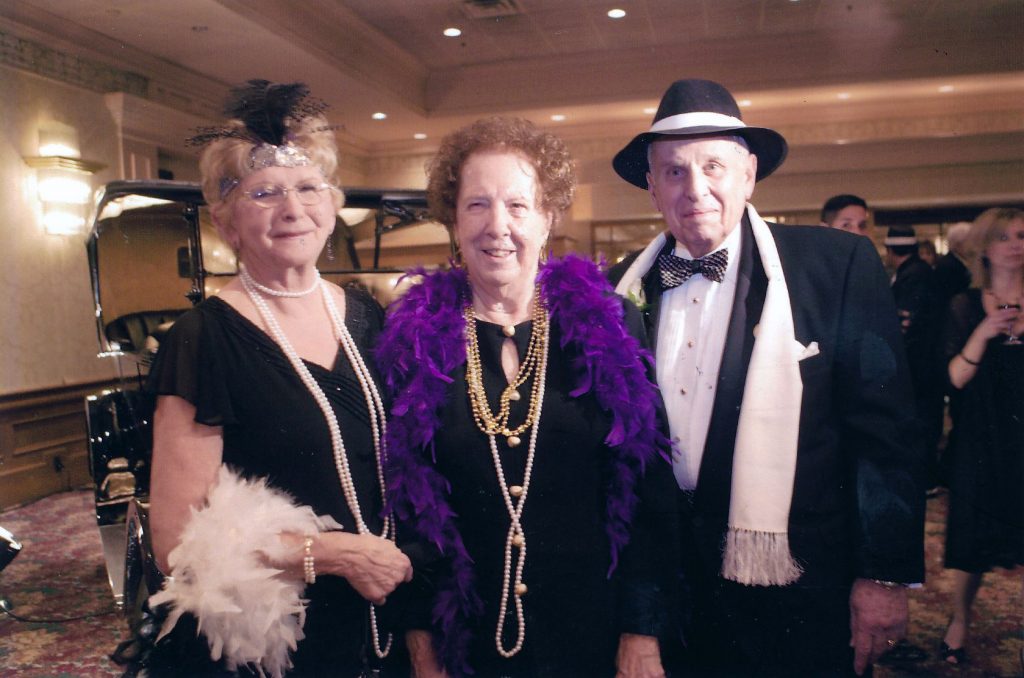 S. Bernadette Kambeitz (center) with Cathy and Tony Viviano at one of the many fundraisers they attended together.

“She was a friend to everyone,” Donahue said. “If you were down at the cafeteria, she would sit down and start talking … She was involved in everybody’s life – in a good way. She treated us like family, and we did the same to her.”

Donahue called S. Bernadette the eternal optimist, having a positive attitude and always finding the good in any situation. That part of her personality is what attracted people to her and how she became acquainted with so many in the community.

That gift was also why she was lured to the hospital’s foundation in 1989. It was in this role that she used her optimism, compassion and relatability to cultivate relationships. The late Tony Viviano, who served on the hospital’s Board of Trustees for many years, once called S. Bernadette his secret weapon. “If I had a big contributor I would pick up the phone and have her go visit them,” Viviano said. “She didn’t mind going; taking care of people, that was her No. 1 priority. She always knew how to comfort and relate to people and how to get them to be charitable.” It also led to S. Bernadette being honored with the hospital’s Mission Achievement Award in 1996 for her commitment to care that knows no bounds.

Building Relationships
Those who know S. Bernadette can speak on her ability to make a person feel as though they are the most important person in her world. She attributes that character trait to her father, whom she frequently mentions and remembers for his joyful, good-natured spirit. As a Sister of Charity, she lives the mission and charism with her compassionate heart and commitment to others.

Marty Gallagher remembers S. Bernadette’s kindness and gentleness. Her aunt, Catherine Bessfelt, had a developmentally challenged brother named Joe. Joe worked as a custodian at Seton High School during the years S. Bernadette ministered there. S. Bernadette and Joe became fast friends, best friends as S. Marty recalls. The pair would be seen together in the halls smiling and laughing. “She talked to him so lovingly and respectfully,” says S. Marty. “It was beautiful to see.” The special friendship they shared lasted even after S. Bernadette moved to Michigan. Every time she would return to Cincinnati, she would take the time to visit with Joe, even making a special trip home to attend his retirement party. 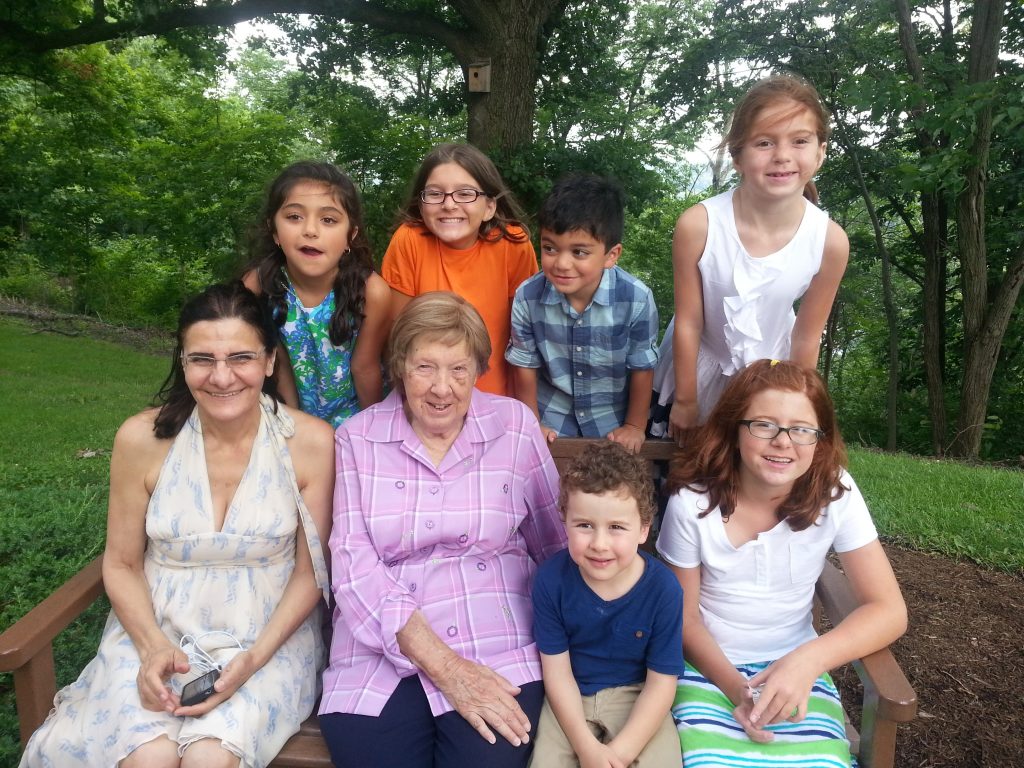 Members of the Haurani family and their children enjoy a visit with S. Bernadette Kambeitz (or Sister B as they called her) at the Mount St. Joseph Motherhouse in the summer 2013.

Karen Hawver, who knows S. Bernadette from her years growing up in Springfield, had the privilege of living and ministering near Sister in Michigan for more than 30 years. She says that she has never seen such devotion and love as the employees showed to S. Bernadette. In fact Bernie (as she affectionately calls her) would babysit for the children of the hospital doctors. One particular family, the Hauranis, entrusted her with their four children. Following their unexpected death, “Bernie stayed with the children through the funerals and many weeks afterwards. She occupied the parent place of honor at every wedding for all of the children in later years. To this day she is very special to the Haurani children and their families. I was always so impressed by her dedication to them and their love for her.”

Compassionate, kind, selfless – the secret to living a long life from S. Bernadette’s perspective is simply living life. She gives herself to others and those who have the honor and privilege of knowing her quickly learn that she values the person they are. “She came into my life and made me a better person,” said S. Thelma Schlomer. That’s all any one of us can strive for.

Happy 100th Birthday, S. Bernadette Kambeitz. The Sisters of Charity, your friends, family, and the communities you have served are grateful for your wisdom, love and the person you are. We are all better for knowing you. 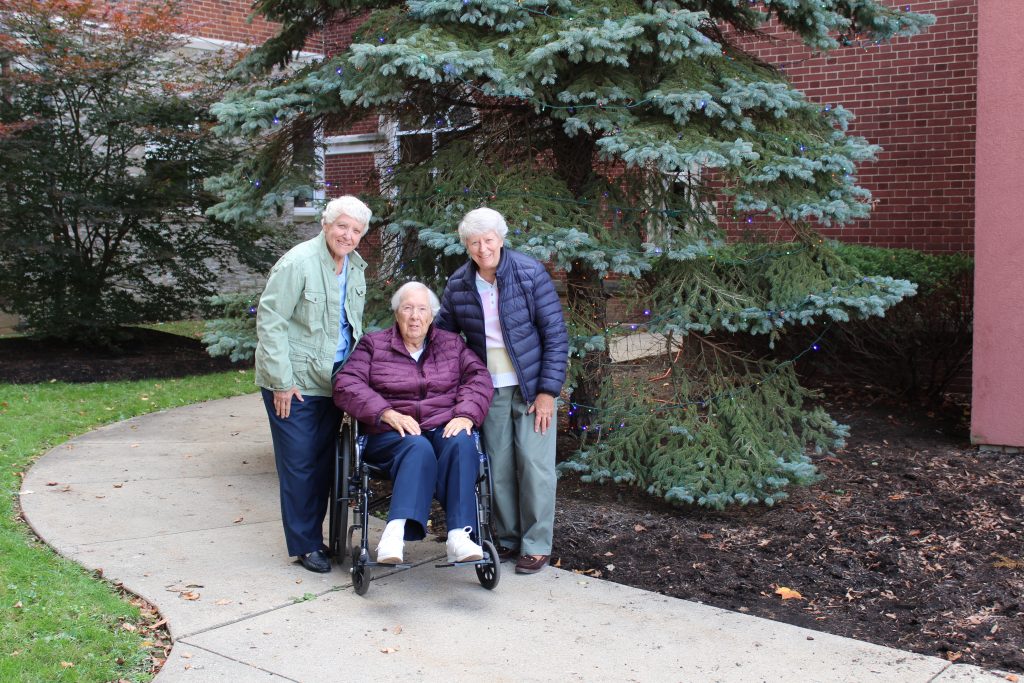 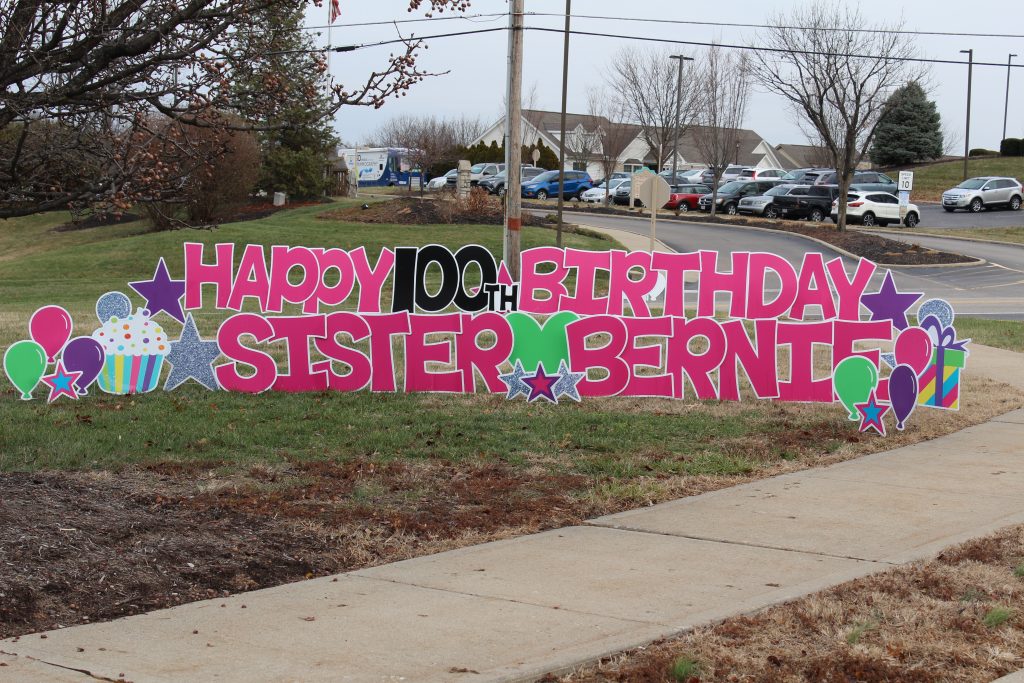