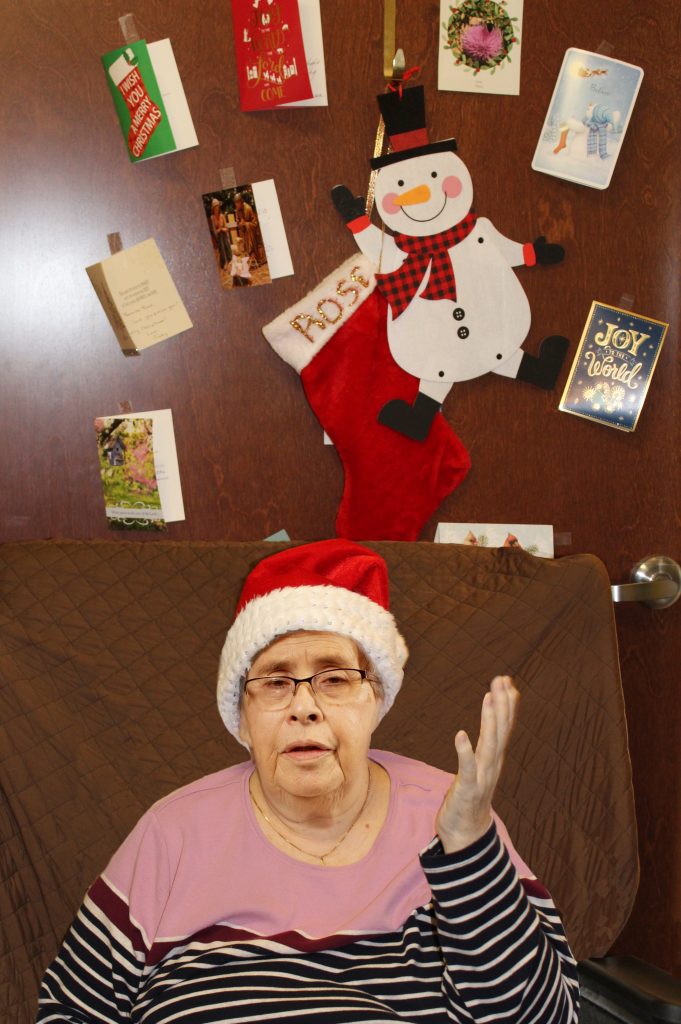 S. Rose Izzo is one of many Sisters of Charity recipients of the Associate Christmas card ministry, initiated to bring joy and Christmas wishes to the entire SC Family.

Oftentimes, people become so absorbed with their holiday plans that they forget to send their Christmas wishes to the extended family in their life. However, Sisters of Charity Associates have begun a service that sends Christmas cards to the members of the Congregation to make sure that their warm wishes touch each member of the SC family.

Ruth Meyer is often considered the founder of this service, which began when she asked Associates if they would be interested in sending letters to some of the Sisters of Charity that live in Mother Margaret Hall. Some of those Sisters did not receive many visitors and Ruth wanted to give them a wholesome experience for the holidays. When Mary Jo Mersmann became the director of the Associates program, she heard about this service and expanded on the idea. Mary Jo noticed that some of the Associates in assisted living settings could be sent letters as well, making sure that their names were added to the list of contacts. The service was so successful that it has become an annual tradition. “Anybody who has a computer can participate,” Mary Jo says. “We try to keep it as inclusive as possible.”

Mary Jo and current Director of Associates Chanin Wilson are some of the Associates that send Christmas cards to the Sisters. They have both noticed that the connection between the sender and recipient of the letters often extends well beyond the annual Christmas correspondence. And distance has expanded from those who live in Mother Margaret Hall to those outside of Cincinnati, Ohio, including Sisters from out of state. Chanin, who lives in Westminster, Colorado, was able to help determine Sisters who would enjoy receiving letters. “It’s only the Christmas cards that we invite them to send, but the writers build great relationships with the Sisters,” Mary Jo says. “If they live out of state and they visit Ohio, they want to meet up with the person they’ve written to.”

Once the list of Sisters is received from Mother Margaret Hall and Chanin, it is emailed to the Associate Community asking how many letters each person would like to send. Participants who write the letters are encouraged to talk about their lives and what their plans are to make each card more personalized and meaningful. People usually want to write about 10 letters, sometimes even 50. This year there are 94 Sisters of Charity on the list and 17 Associates, according to Chanin, but the effort would not have been possible without the overwhelming and loving responses of others who were touched by the Community. “We usually have around 100 people on the list, but last year we had about 400 or so cards sent,” Chanin says.

Because the Sisters of Charity offer so much to their community, the Associates think it’s only fair to return the favor to them. The ministry also gives the Associates a chance to reconnect with old acquaintances or to create new friendships with Sisters. Not only has this gesture meant a lot to the Sisters of Charity, but the Associates are also enriched by the goodness of their friends in the Congregation. “Some of the Sisters hang their Christmas cards on their doors in Mother Margaret Hall,” Chanin says. “It’s rewarding to see that we’ve been able to give back to them in some way.”

The holidays can be a lonely time for some, but with the connections and relationships built between Associates and Sisters through this ministry, the Sisters are reminded of their impact on others. This year, the Sisters and Associates that make up this list will feel merry and bright when they see their heartfelt letters from their friends. “We just want the Sisters to know that we care about them,” Mary Jo says.