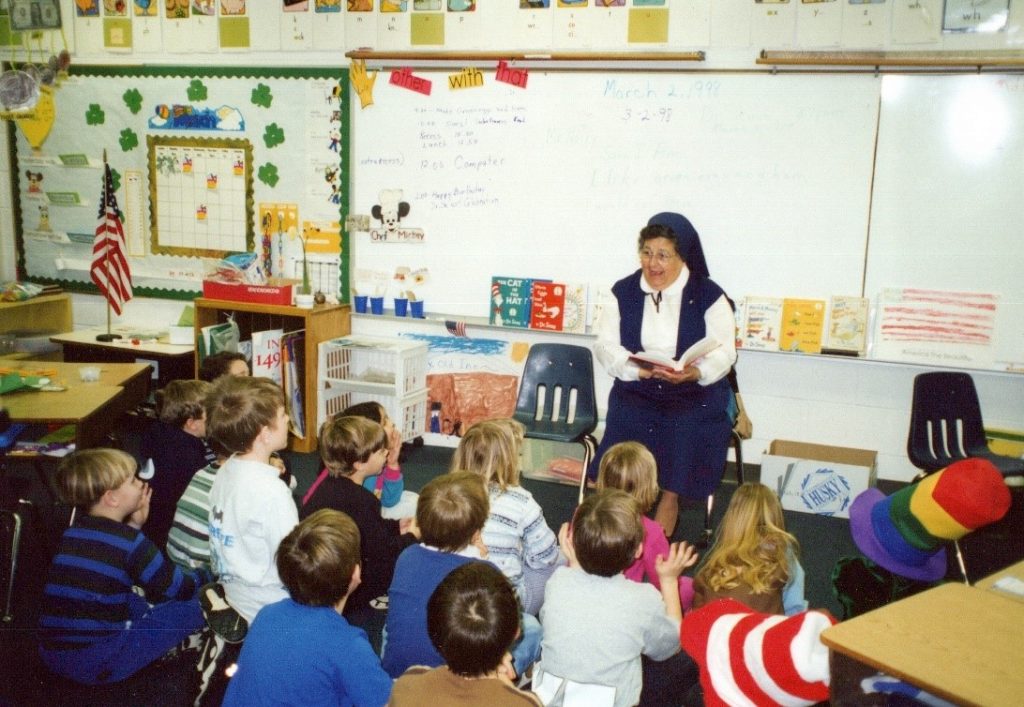 S. Margaret Marie Anthony made the education of her first grade students her top priority during her active ministry.

One of the most common ministries for the Sisters of Charity has been education, but the way S. Margaret Marie Anthony (formerly S. Francis Agnes Anthony) taught first graders for five decades stands out as one of the most touching. Through her service, S. Margaret Marie was able to share in the educational experiences, happy instances and sometimes tragic incidents of those that she came to know and love. Her life was equally touched as her students continue to nurture their relationship with S. Margaret Marie to this day.

Born in Bay City, Michigan – the 17th of 18 children – S. Margaret Marie made her First Vows with the Sisters of Charity in 1948. Ready for a life of ministry, S. Margaret Marie began her life of service the same year at Sacred Heart School in Denver, Colorado. She graduated from the College of Mount St. Joseph (now known as Mount St. Joseph University) in 1957 with her degree in education with experience already in her repertoire. When she first met the students and families at Sacred Heart, S. Margaret Marie informed the parents of her own mission that she found applicable to the rest of her ministries: “I told them that I loved their children and that we would work together and help their children learn the best they could,” S. Margaret Marie says.

Many of her places of ministry across the nation greatly appreciated her presence, but there was a certain reluctance for some employers due to her status as a woman religious. However, none could dismiss the innate talent that S. Margaret Marie had for connecting with students to ensure their learning. Such was the case when S. Margaret Marie was hired at a public school in McRae, Georgia, because of her success with teaching the first graders phonics. By laying a steady foundation for these children, many of them were able to go on to be successful in school and the workplace. “When I was interviewed, I was expected to dress like the other teachers and go by ‘Miss’ rather than Sister,” S. Margaret Marie says. “When I told him that I was happy in my Community and refused to hide who I am, the superintendent called the employer and told him about my teaching phonics and I was quickly hired.”

From as early as her first day, S. Margaret Marie knew that her ministry was properly aligned with her skills and interests. A common theme in all of her teaching ministries was the topic of laughter, as S. Margaret Marie’s humorous encounters were many; one student even asked her if she was “Mrs. Jesus” because of her religious affiliation while another student asked her why she “dressed so funny” while wearing her habit. Humorous moments aside, S. Margaret Marie appreciated her ministry for the joy it gave to her spirit and felt that she was where God wanted her to be. “All of those 50 years that I was teaching the first grade were the happiest of my life,” S. Margaret Marie says.

However, for as many happy moments that there were in her ministries, S. Margaret Marie also shared in the tragedy of some of the families lives. S. Margaret Marie recalls losing two of her students at St. Martin de Porres Parish in Cincinnati, Ohio, during her 10-year stay; one of her parishes was believed to be a target for arson after a mysterious fire took place; and in the mass suicide surrounding the Jim Jones cult in 1978, S. Margaret Marie heard that one of her students was involved in this event that shook the nation. “The parents of one of my former students called me and asked me to pray for their daughter who had run away,” S. Margaret Marie says. “We learned that she was involved with Jim Jones when he was being arrested and she was one of the people who had died.” 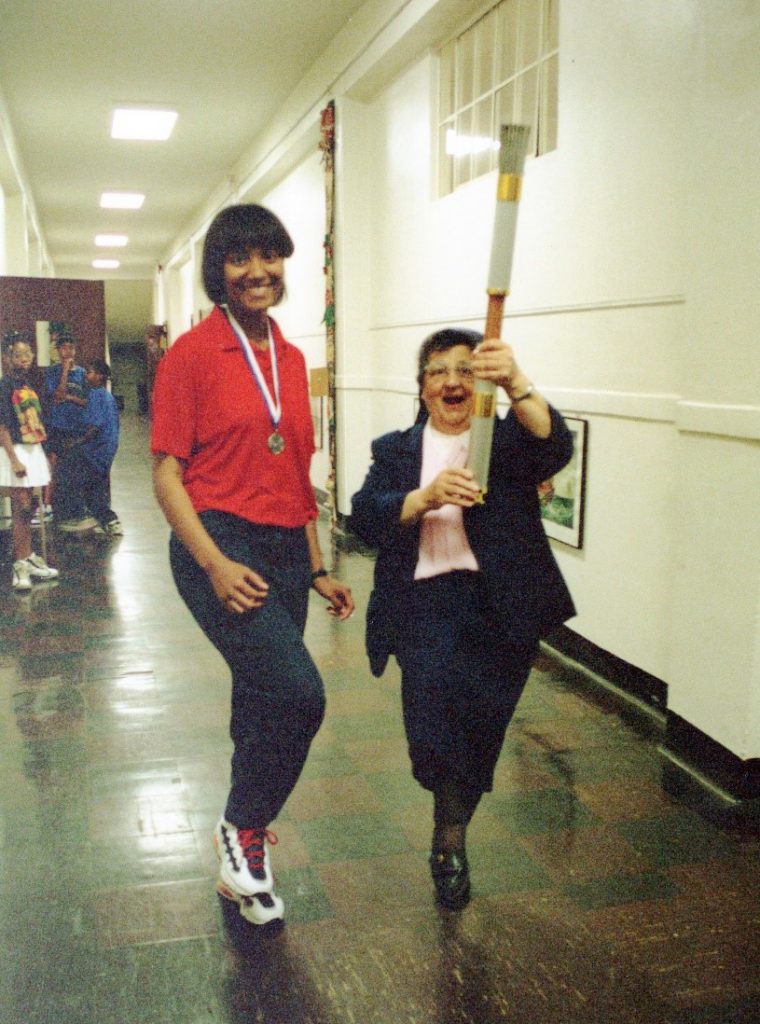 S. Margaret Marie Anthony (right) always made her learning environment as educational and fun as possible, creating lifelong memories for her and her students.

Despite these instances, S. Margaret Marie remained strong in her faith, something that she stressed the importance of in all of her classes. Thankful to be involved with these children in the first place, S. Margaret Marie believes that even the sad parts of her ministries were still a reinforcement of her Congregational values. S. Margaret Marie saw the importance of faith when she saw how it brought people of differing faiths together. Father Patrick, a friend from Precious Blood Parish in Dayton, Ohio, was dying and S. Margaret Marie wanted to do something special for him. Before he passed, she and eight leaders of a Methodist church that she was affiliated with joined in a communal prayer for him. Though these men originally did not think kindly of the Catholic faith, S. Margaret Marie’s ministries moved them to join in the worship for their new friend. “When the prayer was finished, Father Patrick forced himself to sit up and gave each one a special blessing,” S. Margaret Marie says. “Each one of them had tears and I think that’s the happiest thing that happened there.”

Faith of this caliber moved many other people as well in S. Margaret Marie’s ministries. To this day, Sister’s students regularly visit their former teacher to check on her in Mother Margaret Hall for holidays or any other occasion. One of her companions from a volunteer service in North Carolina, Margaret Doyle, still sends S. Margaret Marie material for when she makes cards for holidays. “She still tells me when people are getting married or when they’re having babies so that I can connect with them,” S. Margaret Marie says.

Enjoying the good times and enduring the bad has crafted every person’s life and S. Margaret Marie believes that the sum of all of these things is what creates a life of virtue. After 50 years of experience, S. Margaret Marie demonstrates how all of the events of her ministries culminated in an eventful and meaningful life. “This has been a life of great love,” S. Margaret Marie says. “First of all, love for God, but then love for all the children I ever taught, all the people I’ve met in parishes I served, my great family and for my wonderful Sisters in this Community.”f her first grade students her top priority during her active ministry.