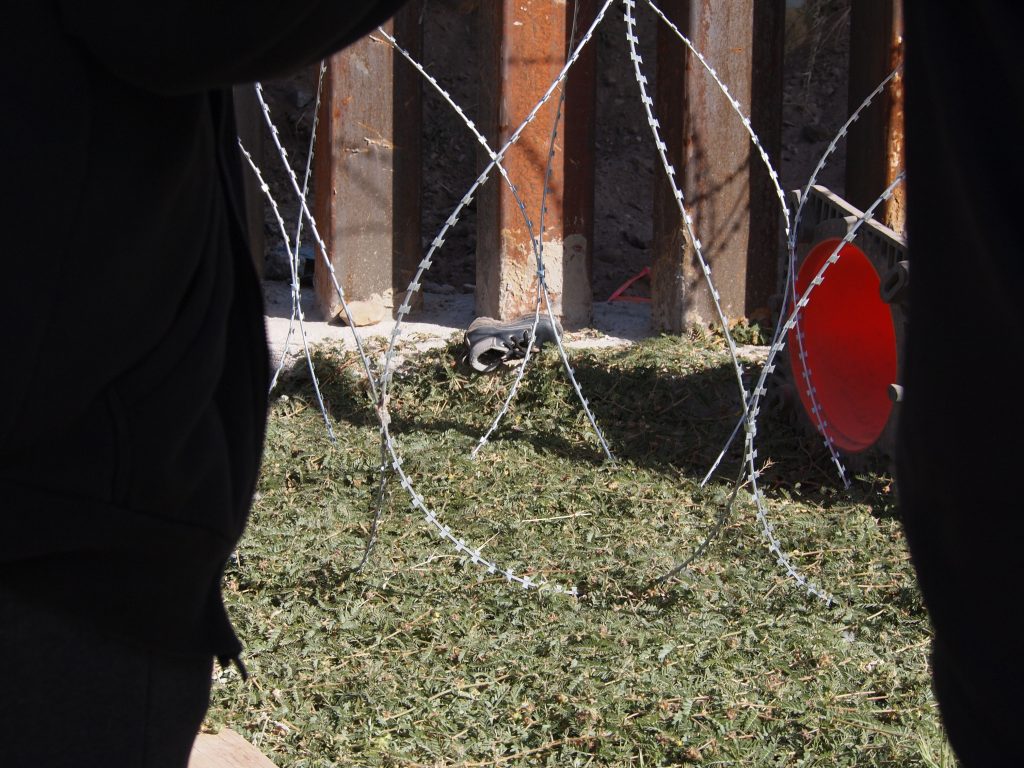 A child’s shoe left under the barbed-wire fence at the U.S./Mexico border.

This article is the last of Intercom’s three-part series on “Sharing the Journey” with the migrants who cross our southern border. The previous two articles shared some of the stories of the migrants and of the Sisters and Associates of Charity who have joined with other volunteers to help them. This final article will describe how the Sister- and Associate-volunteers have been changed by their experiences, and how they hope others will be, too.

The volunteers were inspired by the spirituality and faith of those they served. When asked what she had learned from the migrants, S. Sally Duffy quickly said:

Faith, deepening faith. There was a group that organized a prayer every day, outside. They have an incredible hope. For me they witnessed dependency on God.

It was an experience of patience and realizing how patient these people had been, walking through several countries probably. So a waiting with patience, trying to match their patience.

We are so accustomed in our country to think we shouldn’t suffer. And I see these people who know suffering so well. Somehow or other they can smile and joke and tell you stories, etc., yet they have had great suffering. Which I think is a big lesson for those in first-world countries.

The chapel at Casa de los Refugiados, a center through which refugees came and were assisted in contacting their relatives/sponsors in the U.S., demonstrates the deep faith of those entering the states. Photo courtesy of S. Paula Rose Jauernig, SCL

Associate Patrice Harty mentioned the migrants’ trust that God was with them on their journey. One night after a long day working at one of the shelters, she got lost driving back to Casa de Caridad:

I just kept praying, and I thought, “This is just a tiny fraction of what they must feel like, walking through the desert or wherever they walked, through the cities.” I didn’t have to sleep outside. I didn’t have to figure out how I was going to eat. It was dark. It scared me a little bit. It made me realize, “OK God, you brought me here, you’re going to bring me home.” That actual experience, I think, gave me empathy.

The volunteers were also inspired by the way the migrants formed community among themselves, and by their willingness to help. As Sisters Caroljean Willie and Annette Paveglio said:

Whatever needed to be done, they were willing to do it. At the San Juan Diego Center, they were out cutting each other’s hair, and washing their clothes.

There was one of the migrants who was waiting for her papers. She got some women together and they were helping out in the kitchen, cooking! They had everyone lined up in the hall and they would let just so many in first, and when those got through the line they let the next ones in and so on. She was really running the show, she had it organized. 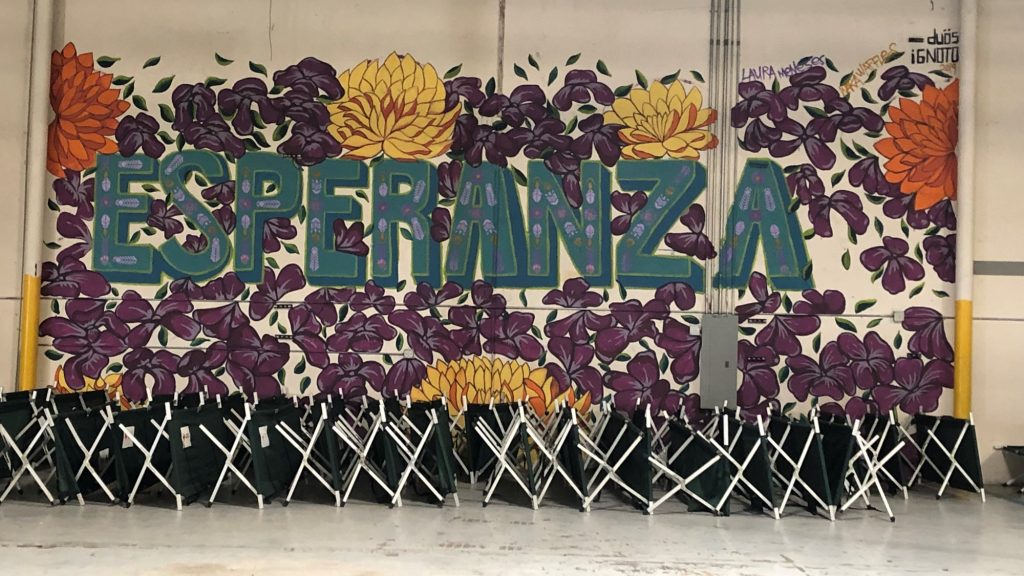 A mural painted on the wall of one of the refugee shelters in El Paso, Texas, reads “Esperanza,” or hope, in Spanish. Photo courtesy of S. Paula Rose Jauernig, SCL

For all of the volunteers, their experiences have been transformative. Associate Evangeline Andarsio said:

After encountering Jesus at the border, the Sisters and Associates want to spark similarly transformative encounters in their families, friends, and coworkers back home. Sometimes this involves correcting misunderstandings about who the migrants are and what their experiences have been, as Sisters Caroljean Willie, Andrea Koverman and Annette Paveglio pointed out:

I think that what is most important is that the stories of these people get out. The rhetoric that you are hearing refers to drug smugglers and human traffickers, coming across the border there. Every one of us that was there did not meet a single drug dealer or a single terrorist.

Well, first of all, that the people coming are not dangerous. These are people who in most cases have only what they’re wearing, and they are simply trying to survive and provide a life for their children. The archbishop from Honduras came and spoke here earlier this year, and one of the things he said was, “There is nothing you can do that compares to what they’re running from.”

I just keep reminding myself, “Whatever I can do I would like to do.” And if it is spreading the word about this to change people’s attitudes, I want to do it. It’s not that people don’t care, I think they don’t get what is really going on in the news, and they don’t understand. So I think that the more that I can spread the message, the better. 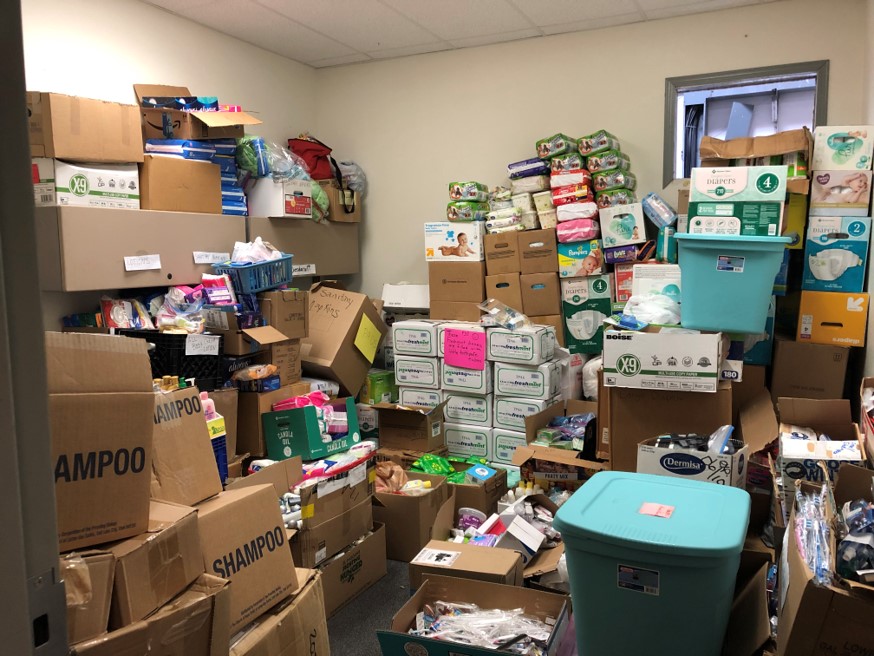 The many donations collected for migrants and refugees by shelters in the El Paso area. Photo courtesy of S. Paula Rose Jauernig, SCL

For Associate Patrice Harty, it has meant educating her high school students:

I did a whole unit on immigration. I used Justice for Immigrants for my materials. One thing I did at the end of their fourth year, I had them make some kind of a game over some topic for their final project. One student took a Chutes and Ladders game and when you opened it up, up pops this wall and it was all about immigration. One side was Mexico and one side was the U.S. And you had to pick a card; this card said, “You had to go back because you got caught by immigration.” It was really, really well thought out.

Still others have advocated with their public officials, as S. Caroljean Willie noted:

I think that the most important thing we can do is tell stories, talk to people, talk to our legislators, write letters, write letters to the editor, write for Global Sisters Report. I do all of the above, except talk to my legislators. Well, I have called them, but we want to make an appointment.

The 16 Sisters and Associates who have volunteered at the border this year all say they have been deeply touched by meeting Christ in those they served. As S. Andrea Koverman said at the end of her interview:

I want to reiterate what a privilege it is. I think that’s why all the Sisters come – because we all know that it is our call and a privilege to be the face of God to the people who are really the most in need. I’m just grateful for that.

When and if the opportunity arises, we would all like to meet Christ at the border again!