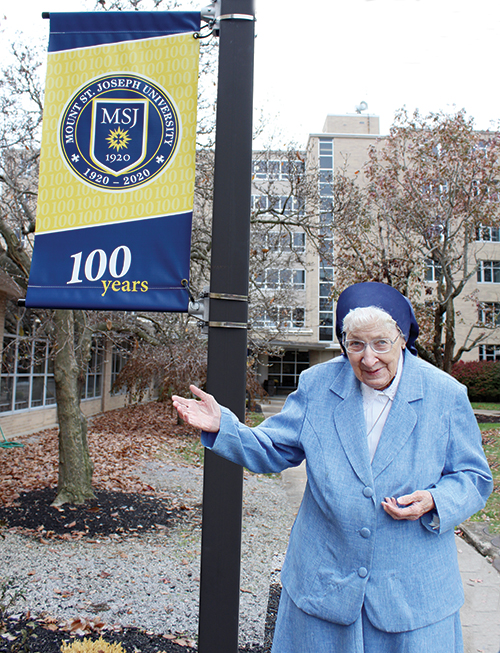 S. Mary Loyola Mathia is one of the oldest graduates of Mount St. Joseph University and has fond memories and gratitude to the 100-year-old institution.

For a century, Mount St. Joseph University – previously known as the College of Mount St. Joseph – has offered an unparalleled education to its students. As the 100-year-old institution reaches this centennial anniversary, Sister of Charity Mary Loyola Mathia reflects on the evolution of the facility as one of its oldest living graduates.

The College of Mount St. Joseph was established in 1920 by the Sisters of Charity as the first Catholic college for women in Southwestern Ohio. In 1986, the college allowed male students to enroll making it a co-educational institution. But before the Mount became the staple of Cincinnati culture that it is today, S. Mary Loyola entered the Sisters of Charity in 1941 and began at the College of Mount St. Joseph the same year. She describes her experience as, “happy, joyful and challenging.”

In her studies, she explored a variety of topics and noticed a keen emphasis placed on the Humanities, like English and psychology, which would “serve her in good stead” for the rest of her ministries and life. However, the Mount also had a wealth of knowledge to share with its students in the natural sciences, such as biology, and in spiritual thought, theology, both of which S. Mary Loyola studied. “I learned from them how to pay attention to details,” S. Mary Loyola says.

This attention to detail served her well when preparing for her ministries and the workplace. With numerous programs like service learning opportunities and experiential learning from collaborative efforts between Mount St. Joseph University and their partners, students gain work experience to better prepare themselves for the workplace. “Career readiness” has always been a priority of the Mount, even in its earliest years; for example, S. Mary Loyola earned her room and board by working as a receptionist for Seton Hall. Not only was she given work experience, but S. Mary Loyola was also happy to become part of the warm and welcoming atmosphere that she had grown to love. “There I got to meet and greet and help anyone who came to learn about the college,” S. Mary Loyola says. 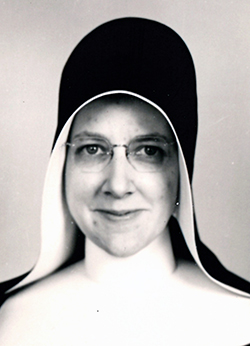 S. Mary Loyola Mathia graduated in 1953, but had the privilege of having experiential learning by ministering as a teacher while pursuing her degree in history.

The Mount was not only a place of learning, but it was a place where friendship blossomed as abundantly as flowers in a meadow. S. Mary Loyola recalls the times when she and her fellow Sisters would walk around the campus to a place called “Sister’s Hill.” They were able to share in their faith as well as their education, which the institution only enhanced with its emphasis on Catholic Social Teaching in relation to one of the core goals of the institution, social justice. “We always got along well,” S. Mary Loyola says. “This is truly a Catholic community.”

Her graduation in 1953 with a bachelor’s degree in history marked the beginning of her life of service and the skillsets that she developed from the Mount greatly aided her in her ministries of education. Graduating after years of hands-on teaching experiences that were laced into her curriculum and lengthened her education, S. Mary Loyola ventured to schools in Michigan, Florida, Ohio and Maryland, but her heart always stayed with the community of the Mount. In Cleveland, Ohio, she became a high school teacher of history and social studies at Holy Name; her efforts did not go unnoticed as S. Mary Loyola was asked to come and work in the education office of the Diocese of Cleveland as a coordinating consultant. Despite having little experience in administration at this point in her life, she felt well-prepared due to her background at the Mount. “I served as the social studies consultant and department chairman for the diocese from 1970-1978,” S. Mary Loyola says.

Though she would pursue her master’s degree in pastoral studies at Loyola University in Chicago, Illinois, she utilized the skills that she learned at the Mount to pursue her degree with vigorous energy. These same skills helped her in 1985, when she helped to direct the opening of the first Catholic school in Citrus County, Florida; she acted as an influential educator and principal for the first year of the school. The school still thrives to this day and is celebrating its 34th anniversary from these humble beginnings, making good use of the adaptive teaching methods that she was exposed to at the Mount. S. Mary Loyola also mentioned the way in which the school developed: “We began with kindergarten through grade 3 and we added a grade each year,” S. Mary Loyola says.

Much like the school that S. Mary Loyola began, the Mount’s education has been highly responsive to the needs of society and its students. Its 11:1 student-to-professor ratio allows for a personal educational experience to help students thrive and build relationships with their educators, something that makes this university unique. “The value of education is that students learn of the wider world,” S. Mary Loyola says. “Not just through lecture, but technology that provides experiences far beyond the lecture experience which I was exposed to in my years.”

Possibly the most glaring difference between her schooling experience at the Mount and the current experience that students have is the development of technology that has made information readily accessible for the students. One of the most important skills that S. Mary Loyola says that she learned was how to “read, reflect and respond,” something that is made easier through the use of technology and computers today. By enhancing the methods of teaching students, S. Mary Loyola believes that students are better prepared for the ever-changing world.

The institution was granted university status in 2013 with new opportunities for study and academic achievement. Mount St. Joseph University currently boasts more than 1,000 undergraduate students and 520 graduate students. Not only has S. Mary Loyola noticed the impact that the university had on her, but how it reaches out to other communities in the Delhi area and beyond through their service projects and the activism of the students. “As I move in the area of Delhi, I see the influence of the Sisters of Charity who for more than 100 years have taught people how to know God, how to love Him and how to serve him,” S. Mary Loyola says.

S. Mary Loyola Mathia stands in the Mater Dei Chapel at Mount St. Joseph University. Artwork gracing the chapel was created by Sister of Charity Augusta Zimmer and her students.

Throughout her ministries, S. Mary Loyola emphasized that education is one of the true benefits to understanding the world and preparing for the workplace. According to S. Mary Loyola, Mount St. Joseph University is the epitome of what a learning institution should strive towards because of its up-to-date teaching methods and innovative technology. S. Mary Loyola, with an esteemed record of service in education, cites Mount St. Joseph University as a forward-thinking and ever-evolving institution that is on the cutting edge. She bestows blessings upon this graduating class, alumni and future graduates on their journeys. “Mother Seton always told our Community to move forward and the university continues to do that,” S. Mary Loyola says. “As Elizabeth Seton said, ‘May you always be prepared for the world to which you are called.’”