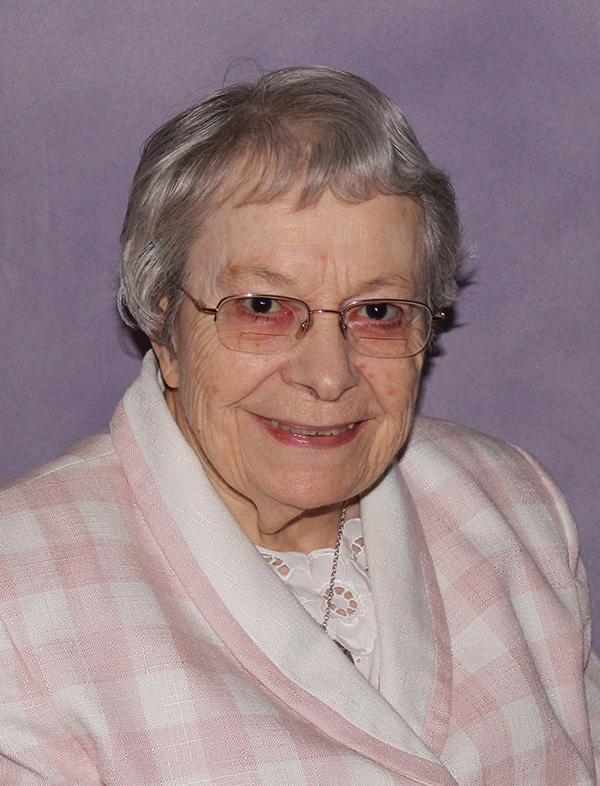 S. Mary Alberta Bodde died Dec. 21, 2019 at the age of 96 in Mother Margaret Hall, the nursing facility of the Sisters of Charity. S. Mary Alberta was born Charlotte Adelaide Bodde on May 9, 1923 to Albert F. and Ethelynn (Ohlert) Bodde in Goodells, Michigan. She was raised on a poultry farm, the oldest of five children. She was a Sister of Charity for 74 years. S. Mary was named for her aunt, Sister of Charity Marie Adelaide Bodde, with whom she developed a close relationship.

Mary grew up in the Detroit, Michigan area. She attended Our Lady of Mt. Carmel School in Emmett, Michigan, and after the family moved to Marine City she went to Holy Cross and graduated from Holy Cross High School in 1941. After high school she received a scholarship to the College of Mount St. Joseph. She attended on a wartime accelerated program, graduating in three years. This allowed S. Mary to get a teaching job in a one-room school near her home. She then entered the Sisters of Charity on Oct. 2, 1945. She felt she was born with a religious vocation and it was the inspiring SC faculty at the Mount which sealed her original intention. “I rated their ‘humanness’ as their most attractive quality; they were always interested in all the dimensions of the lives of their students,” S. Mary stated in her autobiography.

Mary earned a Bachelor of Arts degree in Latin from the College of Mount St. Joseph in 1944 and a Master of Arts degree in English from the University of Notre Dame, South Bend, Indiana, in 1959. She did additional work at Oxford University, Oxford, England, in the Linacre Graduate College.

Mary’s ministries span more than 65 years in education (secondary and college), pastoral ministry, campus ministry and Congregational leadership. Beginning in 1947 she taught journalism and English at St. Mary, Jackson, Michigan. In 1953 she came to St. Mary, Marion, Ohio, and then served as SC formation director for one year (1954-’55). She taught at Bishop Fenwick, Middletown, Ohio (1958-’63) before going to Oxford, England as a full-time student. In 1965 she returned to the classroom as English teacher at Shrine High School, Royal Oak, Michigan (1965-’66) before coming to the College of Mount St. Joseph as English professor (1966-’73). She was then asked by her Sisters to become provincial of the Detroit Province where she remained until 1979. Following a semester sabbatical at St. John’s Seminary, Plymouth, Michigan, she was hired there as director of programming and promotion. S. Mary developed summer courses for priests to earn their M.Div. degrees, opening the classes to the laity as well; she also offered spiritual direction to the priests of the area. After five years she looked to campus ministry at Oakland University from St. John Fisher parish, Auburn Hills, Michigan. She would say that this experience offered her the greatest satisfaction, especially in exposing college students to different cultural and economic situations in the annual service retreats in eastern Kentucky. After 14 years she retired from this ministry, but remained in the Greater Detroit area, serving as a reporter for the SC Communications Office as well as editing publications for her parish and enjoying golf, writing, reading and spending time with friends.

In her retirement years she remained ever active. S. Mary moved to the Motherhouse in 2005 with renewed energy and found a ‘best fit’ in the SC Communications Office, serving as a resident volunteer until 2015. She wrote articles for Intercom, offered her wisdom and insights, always with her ear out for possible story ideas to pursue. Her work was always done with care, research and thought.

Sister of Charity friend Noreen Ellison recalled, “Mary was a gracious, prayerful and intelligent woman who exemplified the virtues of simplicity, humility and charity. I was privileged to live and work closely with Mary for six special years when we served as a provincial team. Mary, may you now experience the perfect peace and joy of the ultimate reunion of heaven’s love!”