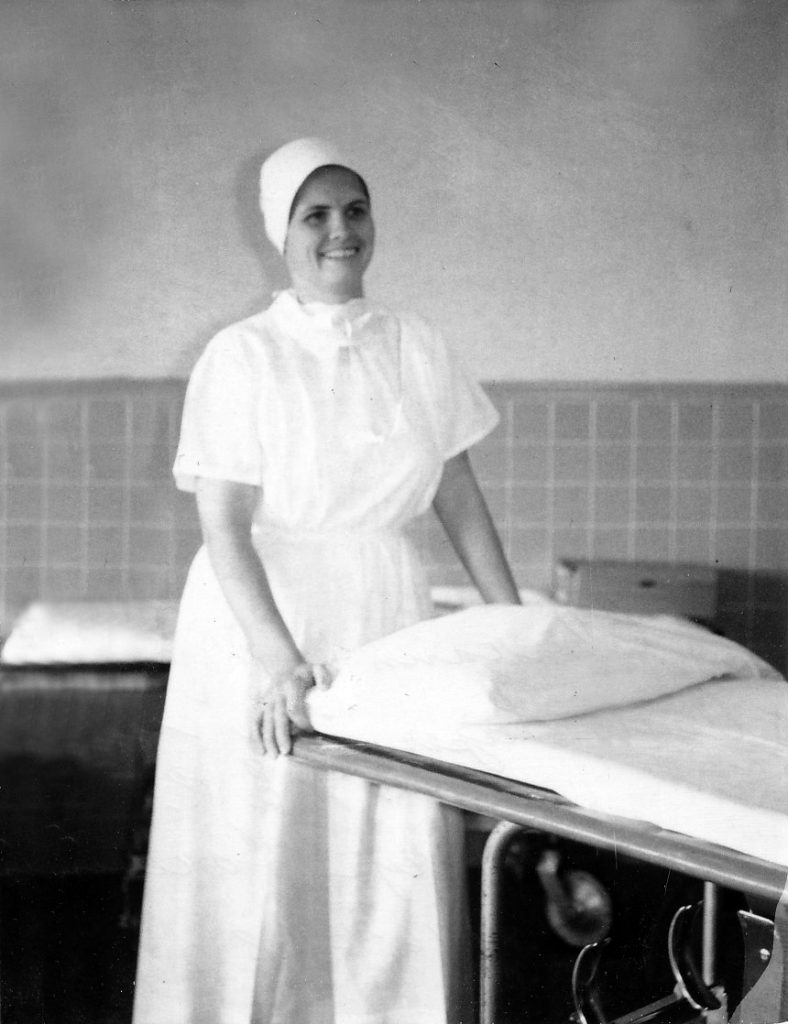 S. Clarann Weinert’s desire to join the medical field was matched only by her desire to become a Sister from a young age.

Building loving relationships has been the bedrock of Sister of Charity Clarann Weinert’s ministries. Using it in both her ministries and her faith life, S. Clarann responds to her Diamond Jubilee of 60 years with gratitude to the people in her life.

For S. Clarann, the call to become a woman religious began as a “whispering in her heart” that started during her late middle-school years. Her calling to help others by becoming a nurse – which was her dream since she was about 4 years old – was just as important. However, she found the opportunity to become both a nurse and a woman religious while studying at Good Samaritan Hospital in Dayton, Ohio. While she worked there, she met the Sisters of Charity through Sisters Michael Ann Daly, Ann Seton Gallagher, Margaret Ebbing and Anna Suttman. After one of the Sisters of Charity passed away, S. Clarann was selected to attend the funeral at Mount St. Joseph as a representative of her school. Enamored by the chapel and the chance to pursue her degree as a nurse and to grow spiritually as a Sister, S. Clarann entered the Community with the guidance of S. Michael Ann. “It was through working with and being alongside the Sisters that I found a home,” S. Clarann said. “Watching them enjoy each other was all that I needed to see.”

Because her credits could not be transferred to the Mount, she had to begin as a freshman in the nursing program. Graduating in 1965, S. Clarann began her journey of service that took her across the nation, including Colorado, New Mexico, Washington and Montana. St. Joseph Hospital in Mount Clemens, Michigan, was the first ministry where she served as an operating room intern for a year to learn how to become a supervisor. While she had an accomplished career as an operating room and emergency room nurse, S. Clarann wanted to learn the best ways to help others. She pursued a master’s degree in nursing from The Ohio State University (Columbus) in 1972, but, as she says, “I felt that God planted a seed in my head that steered me towards nursing science.”

The University of Washington in Seattle accepted her application for the doctoral program to earn her Ph.D. in sociology. During this time, a friend had suggested a place for her to grow as an educator – skills that she would need with her Ph.D. It was after this that S. Clarann began her 38-year stay in Bozeman, Montana at Montana State University, where she conducted numerous studies on rural nursing care as a nurse scientist. Though she only intended to stay for two years, she became close to the people of Bozeman and the faculty. Additionally, the setting was a perfect place to study the effects that a rural setting can have on the health of people. “I fell in love with the rural people,” S. Clarann says. “It was this whole group of people who no one else was looking at with long-term illness and I wanted to help them.”

In her ministries, S. Clarann discovered the recurring theme of “social support,” which refers to a system of people in one’s life that can reduce stress levels through their support and even helps some people heal quicker. It was during her doctoral studies that she and another colleague developed a 25-item questionnaire used to measure social support. Known as “PRQ85,” or the Personal Resource Questionnaire, the survey was so unique and in-depth that her professors immediately recommended having it published. The instrument has since been translated into five languages and continues to be used to date in multiple research projects nationally and internationally. 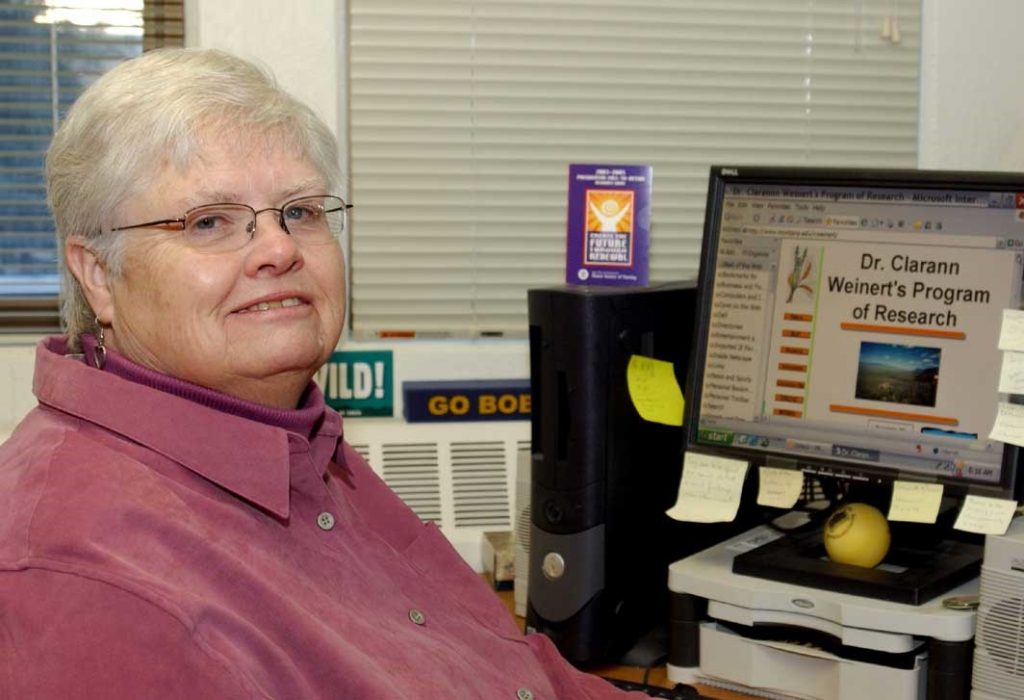 Her proudest accomplishment, S. Clarann’s study entitled Women-to-Women impacted the social support of women in rural areas and its correspondence to their health.

The project that she is most proud of was known as Women-to-Women, a study that spanned 15 years and involved installing computers in women’s homes. The benefit of the computers was that women living with long-term illnesses were able to communicate with others via a chatroom. The installation of these computers was integral to the better health of these women, as was the 15-week course used to teach these women how to take care of themselves beyond the duration of the class. The study included women from eastern Oregon, Washington, Idaho, Montana, Wyoming, North and South Dakota, Nebraska and Missouri. “The government wanted more studies done on women because there were so many men-based studies,” S. Clarann says. “We gave a questionnaire to the 700 women after our intervention and received an overwhelmingly positive response.”

Her efforts in such projects did not go unnoticed as Sigma Theta Tau International Honor Society, or STTI, recognized her and awarded her many times throughout the years since her induction in 1977 at the University of Washington. As a part of the Zeta Upsilon Chapter of STTI, S. Clarann is proud to be a part of an organization that supports people of her profession as the only honor society for nurses. The “icing on the cake” for S. Clarann was when she was inducted into the STTI Researcher’s Hall of Fame in 2010, which she helped to establish. S. Clarann says, “The best part of my career as a nurse scientist was to see other people succeed be they faculty, other colleagues or students.”

Though it can be difficult for her to practice her faith between her 70-80 hour work week and being the only woman religious in Bozeman, S. Clarann began her own prayer group. Publicizing it more as a gathering than a prayer group, the “community of faith” meets every other Tuesday for prayer and is celebrating its 25th anniversary. She also became part of an experimental small group at the same time with a few of the Sisters of Charity. Affectionately called the “Somewhere Out There” small group, it consisted of 10 individuals from California, Washington, Kansas, Florida, Montana, New York and Ohio. “I’ve had two groups for over 25 years that helped me to sustain living my vows and not being alone in my spirituality,” S. Clarann says.

Despite her time living geographically away from the Sisters of Charity, S. Clarann emphasizes a sense of “rootedness” in the Congregation that she takes everywhere that she goes. To stay active in her Community, S. Clarann participates as a part of the Seton Enablement Fund Committee. This allows her to make visits to Cincinnati, which refresh her memory on why she chose this Congregation in the first place. “I always come to Congregational Days, Chapter and other Community gatherings, and I have a personal writing ministry for birthdays and anniversaries,” S. Clarann says. “I made a firm commitment to stay connected. I didn’t join the Community to be isolated.”

Because of her fateful encounter with S. Michael Ann and others in the Community, S. Clarann was able to live out her personal mission as a healer while living out the teachings of Elizabeth Ann Seton. Though she is retired from her professor position, S. Clarann continues to serve as a research scientist for Montana State University, primarily concerning herself with projects related to healthcare in rural areas. S. Clarann says that wherever she is in the world, she will take the Sisters of Charity with her and that she may even return to Ohio when her research is complete. Until then, S. Clarann says, “The Sisters of Charity are such a powerful and educated and holy group of women. I am who I am because of who they were from the beginning and who they are now.”