“Take every day as a ring which
you must engrave, adorn, and
embellish with your actions,
to be offered up in the evening
at the altar of God.” 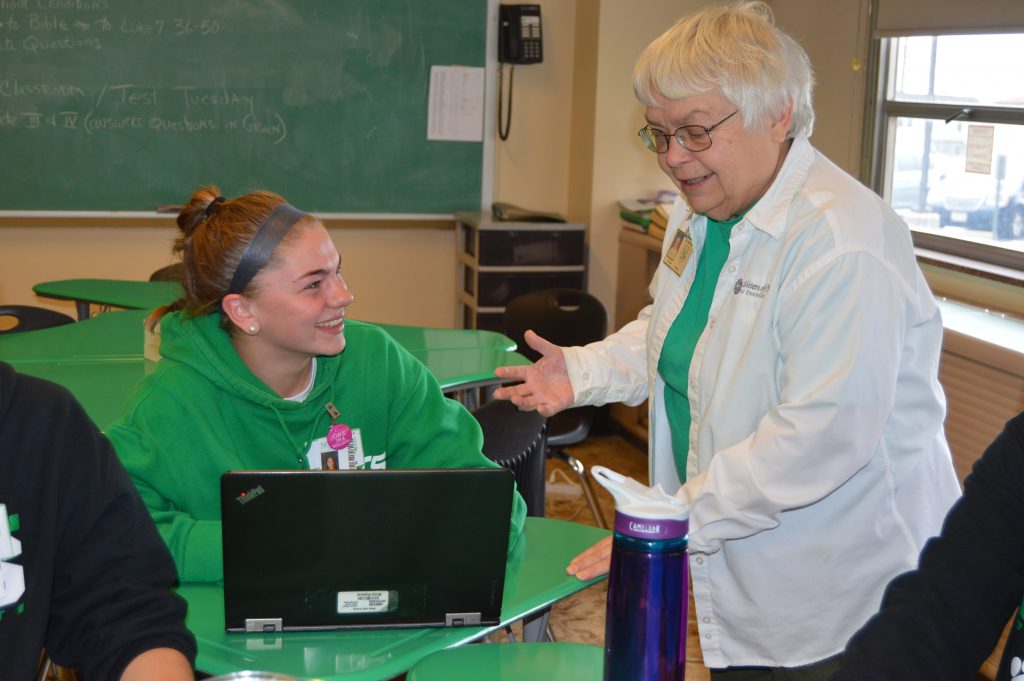 S. Teresa Dutcher retired from Seton High School in May after 39 years of ministry to the school.

In May, the Seton High School community celebrated the end of an era with the retirement of S. Teresa Dutcher. Not only was it the end of S. Teresa’s 39 dedicated years to the school, but it was also the end of more than 160 years (1854) of service by the Sisters of Charity as teachers and administrators. S. Teresa took the time to reminisce about her years at the school and the significance of her retirement.

Teresa first arrived at Seton High School in 1974 as a member of its social studies department. With little experience under her belt, she found the school to be quite large, particularly in comparison to her first teaching ministry at Marian High School. Those were the years when more than half of the staff was made up of Sisters of Charity and S. Teresa said she enjoyed the pleasant, friendly community of teachers she came to work with. Five years later she returned to Marian first as a social studies teacher and then eventually moving into an administrative role. Soon after the school closed and merged with Purcell High School, becoming Purcell Marian, and as assistant principal, she was in charge of academics. “We did well by the merger,” S. Teresa says. “It had its issues, but the staff was really good. We pulled it off well and I am proud of that.”

Four more years went by and in 1985 S. Teresa returned to Seton this time as assistant principal. Through the years she transitioned from administration to faculty and department chair, holding the role of chair of the religion department for many years.

Changes are inevitable in almost four decades of service, and S. Teresa recalls many through the years, particularly as local demographics changed. Enrollment decreased and increased with the trends of the times, and the physical look of the school was altered as buildings were torn down and new ones erected to accommodate the needs of the students. Convents were once a part of the school’s existence and many Sisters of Charity lived in one of the residences throughout the years, including S. Teresa. As a member of Farrell House, she recalls each house of Sisters being responsible for the celebration of a particular holiday and coordinating activities and games for all to participate in.

Throughout the years the number of Sisters of Charity on staff also slowly declined. As one of the last Sisters of Charity to minister at the school, S. Teresa said she as very aware of the fact that there was a certain torch she carried. She always felt welcome to offer her opinions or suggestions to keep the school aligned with the Sisters of Charity mission. More recently, as the only SCs at the school, she and S. Sandy Howe worked with faculty and staff to implement a recycling program at Seton that embraced the SC commitment to care for all creation. They were always open to the Sisters input and willing to act, she recalled.

For all the change what has remained at Seton High School is its spirit and commitment to the Sisters of Charity mission. S. Teresa says students have always risen to the direction of their teachers and showed respect and general concern for others. “There were kindnesses that we did for each other that were positively reinforcing,” she said. Acts of kindness such as a student offering to read from the book when she noticed Sister had a sore throat, supporting one another when a family or staff member lost a loved one, to even picking up their former teacher’s check at a local restaurant; their fondness for one another was mutual.

In looking to the future she is only filled with assurance and hope. Many of the current administrators and teachers she herself taught, and over the last several years she has witnessed a much more directed, focused curriculum incorporating the heritage of the Sisters of Charity as well as St. Elizabeth Seton, Mother Margaret George and Servant of God S. Blandina Segale.

“I feel good that we are leaving Seton High School in good hands. The school continues its way up,” she adds. “There were times when I felt like I wanted to leave but then stayed because I felt the Sisters of Charity needed to be there. The current administration made it very easy to leave. They are doing a fine job of carrying on the Sisters of Charity spirit and charism. It is part of the atmosphere.”

And how is S. Teresa spending her retirement? After one month of restful retirement she began her new role – councilor for the Sisters of Charity Leadership Team. “I went from a part-time position and summers off, to a full-time position year-round,” she laughed. And so her life of service and ministry continues in a new role bringing with her many gifts and learnings from the faculty, staff and students of Seton High School.