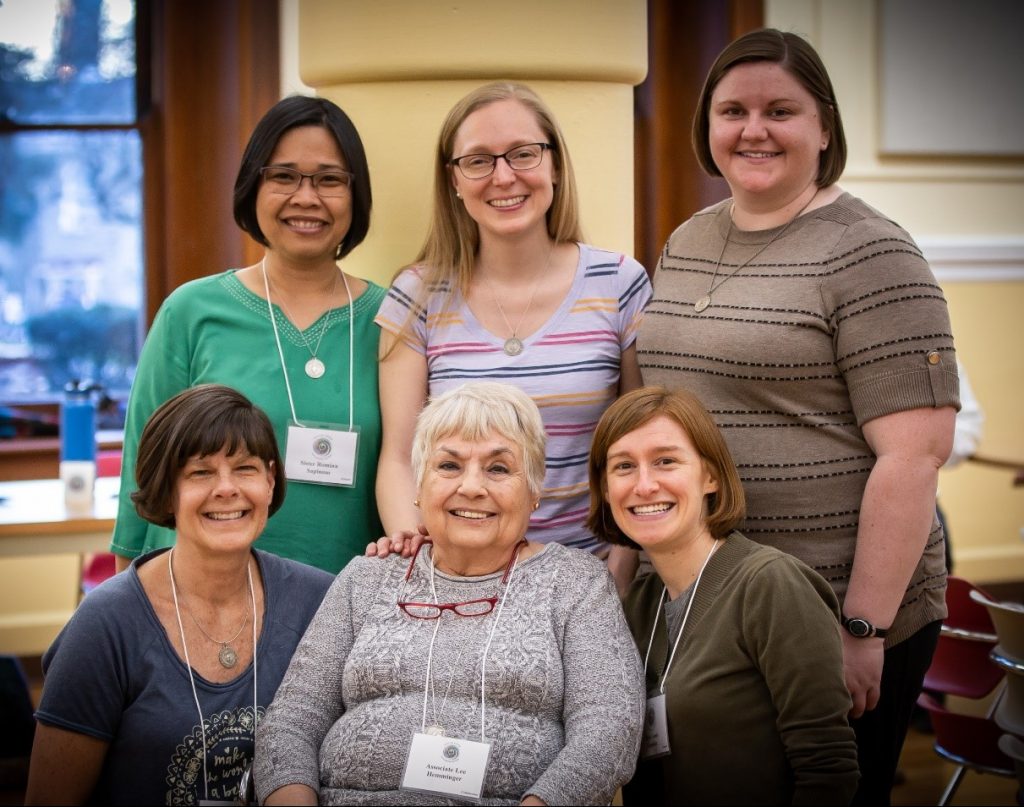 Lee Hemminger (front row, center) is inspired by the Sisters of Charity each day to live out her commitment as Lifetime Associate to the fullest.

For Associate Lee Hemminger, service is a lifestyle best represented by the Sisters of Charity; as such, she made her commitment as a Lifetime Associate to emulate this dedication to others. Joyful and courageous, Lee hopes that her commitment will inspire others in the same way that she has been inspired.

Lee’s life changed when she served with the Sisters of Charity in 1968 while volunteering for Catholic Charities in Denver, Colorado, where she served to as an outreach worker to make home visits and evaluate the needs of poor families. During this time, she met her dear friend S. Michael Mary Eagan for the first time. Referring to S. Michael Mary as a “bundle of joy,” Lee soon discovered that the rest of the Congregation was as jubilant and enthusiastic about service as she was. She maintained these new relationships and was so moved by the charism that she switched occupations in the 1980s to work at St. Anthony Hospital in Denver, Colorado. The Sisters had a strong presence at this hospital and Lee happily committed herself to their charism. “I couldn’t believe how much joy they lived their lives with,” Lee says.

The more interaction that Lee had with the Sisters of Charity, the more she felt an innate desire to serve alongside them. During her spiritual pilgrimage in 1996, Lee learned about Association, which she saw as a way to stay connected with the women she had come to love and to serve others in the process. She eventually became an Associate of the Sisters of Charity after meeting with S. Rita Hawk, but she felt that she wanted to stay committed to the Congregation permanently rather than just yearly increments. After a year of discernment with her companion, the late S. Janet Gildea, Lee learned her place in the charism of the Sisters of Charity and made her Lifetime Commitment in September 2014. Lee says, “It was the most rewarding experience of my life.”

To honor her commitment, Lee stays active as a Eucharistic minister and continues to volunteer at St. Frances Cabrini Parish’s food bank on Wednesday mornings in Littleton, Colorado. She is also involved with the St. Vincent de Paul Society where she manages the hotline for two weeks of the month to assess the needs of the people they serve so that other volunteers can make their home visits. But like the Sisters, Lee believes that serving does not end with her volunteer work; Lee also makes continuous efforts to stay civically engaged by writing letters to Congress and her Senators. “I’m still involved in justice work,” Lee says. “I have a strong feeling for the need of equality in this world and in every way.”

Through her Association, Lee has been moved time and time again by the Sisters, stating that every new generation offers a fresh perspective through experience and innovation for volunteering. Knowing the Sisters of Charity for so long was pivotal to Lee’s faith and service and she still feels inspired by the Sisters each day. Lee says that members like her friends Sisters Michael Mary and Rita continue to encourage her to use her skills while also being aware of the future of the Congregation through faithful members like S. Tracy Kemme. “S. Tracy has such great faith and her service inspires me each day,” Lee says.

Fueled by the spirit of the Sisters and their charism, Lee hopes that through her service, future Associates are moved by the Congregation. Lee looks forward to many more years as an Associate where she will continue to serve as so many before her have served under the charism of the Sisters of Charity.