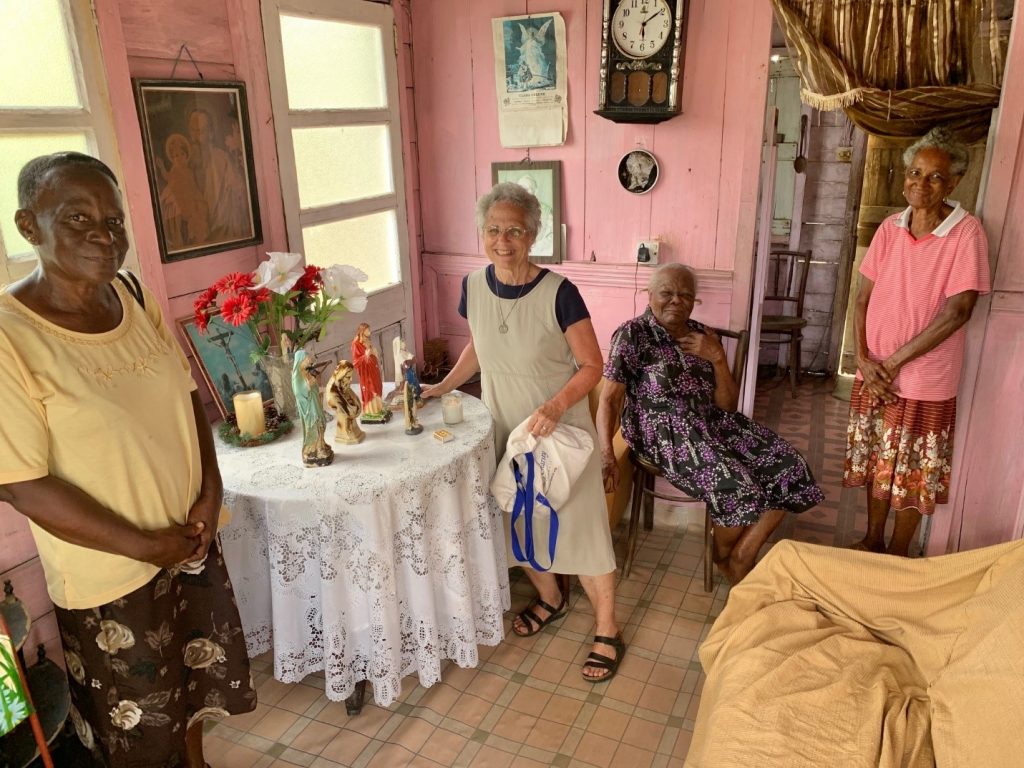 On her most recent trip to St. Lucia, West Indies, S. Mary Gallagher (second from left) was able to make new friendships as she visited the sick in their homes.

Being able to revisit old experiences is a true and rare treasure and it is an opportunity that Sister of Charity Mary Gallagher has recently taken. While on an Archdiocesan effort to “twin” two parishes together in St. Lucia, West Indies, S. Mary was able to reignite old friendships and create new memories.

For years, members of St. Michael’s Parish in Mount Orab, Ohio, wanted to form a twinning relationship with two St. Lucian parishes: the Parish of St. Lucy in Micoud and the Parish of St. Anne in Mon Repos, but it wasn’t until Dr. Michael Gable, the director of the Archdiocesan Mission Office in Cincinnati, Ohio, intervened that this dream became a reality. Dr. Gable assembled a group of interested individuals, which consisted of four parishioners from St. Michael’s Parish, and Lisa Fletcher who works in the Evangelization and Catechesis Office in the Archdiocese of Cincinnati. However, they realized that they would need someone familiar with the Caribbean and subsequently called S. Mary to see if she was interested. S. Mary says, “I almost went through the telephone and said, ‘I don’t think that’d be any problem!’”

Mary’s first visit to St. Lucia lasted from 1979 until 1990, where she was tasked with training catechists and providing religious education for some of the schools, even helping the teachers create an after-school religious program. Referring to this time as one of the most fulfilling of her life, S. Mary wondered if her ministry would last with any of the people she served and she was eager to return. “I was there for about 10 years and when I left, I never really knew if anything stayed with the people I ministered to,” S. Mary says.

When S. Mary and the team arrived in St. Lucia, they were greeted by Fr. Samy (S. Mary explained that the pastor preferred Fr. Samy because his real name was too difficult to pronounce). Fr. Samy, they learned, was the head pastor of both the Parish of St. Lucy and the Parish of St. Anne. He had arranged for the Cincinnati guests to stay with the Franciscan Sisters of the Sorrowful Mother in their retreat house where S. Mary was reunited with S. Michael Lewis of this congregation who served with her in the 1980s. 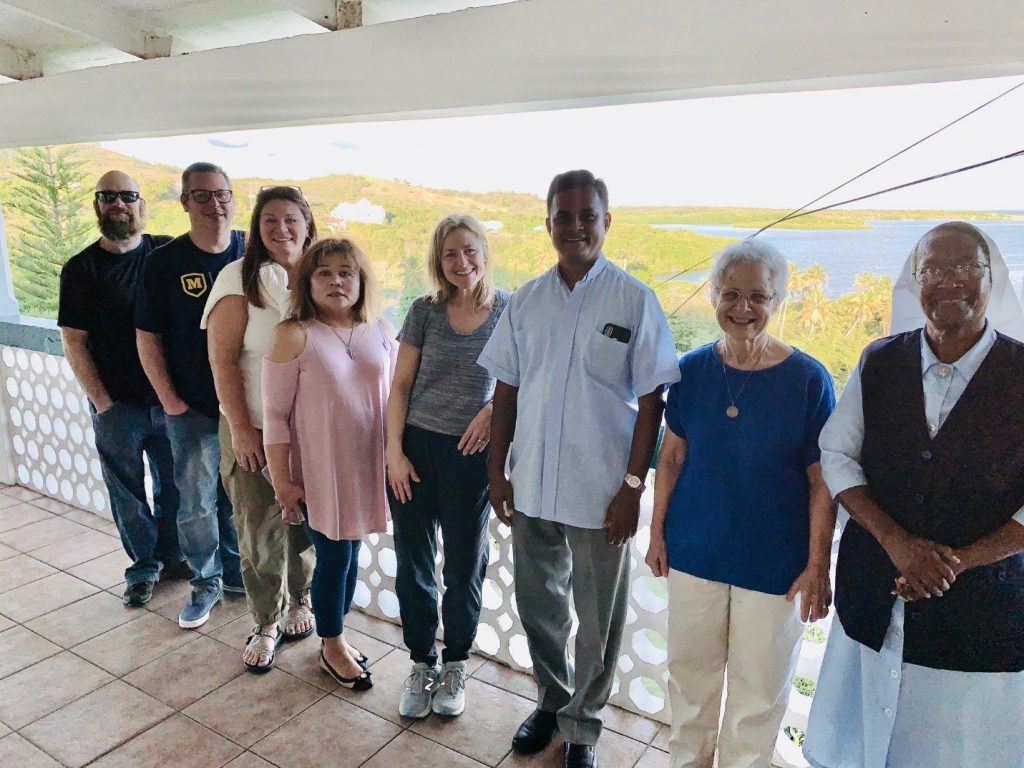 In order to begin the twinning process the following day, the parishes began by meeting with the headmasters (the equivalent of a principal in the United States) and discussing their desires for their respective parishes and the financial challenges of making their school up-to-date. S. Mary remembers one teacher that hopes to install computers for her classrooms and, though it seems like she will not get that equipment in the near future, she never doubts that she will. “I couldn’t get over their hope-filled spirit,” S. Mary says. “It brought me back to the 1980s when there were so many struggles for the people we were serving but they never doubted that they would be able to achieve their goals in the long-run.”

After Fr. Samy led the team to visit the sick in their homes, he and the team facilitated a discussion between the parishes. Both of the leaders of the communities were engaged in asking questions about each other’s parishes, eager to learn more. They eventually celebrated Mass together, where they noticed differences in their temperament and use of music during the celebration, but each side was willing to adapt to make the other comfortable. Not only were the parishes close in proximity – separated by less than 10 miles – but they were building fulfilling relationships as well. “They were breaking down the resistance and working through how they were going to do this twinning process, but on a personality-basis, they were beginning to click already,” S. Mary says.

While new friendships were beginning to form, S. Mary reconnected with friends from her previous ministry when she heard a small voice calling her name while in the nation’s capital, Castries. Two of her former students during her first ministry to the Caribbean were there and one of them even followed S. Mary’s advice and became a First Communion catechist. “One of the catechists said to me, ‘Yes, you really formed me,’” S. Mary recalls. “It was very affirming to hear that after all this time I was still having an impact on their lives.”

Nostalgia is a gift of God; it allows us to know where we have been and see how we have grown and changed in relation to the lives we’ve touched. S. Mary says that touching base with some of her old acquaintances gave her hope because she saw what could grow from this twinning experience. The team hopes that in the future members of these parishes will be able to visit Mount Orab to once again see, as S. Mary says, “how we can celebrate what unites us and grow together in a greater pasture of being one body, the body of Christ.”