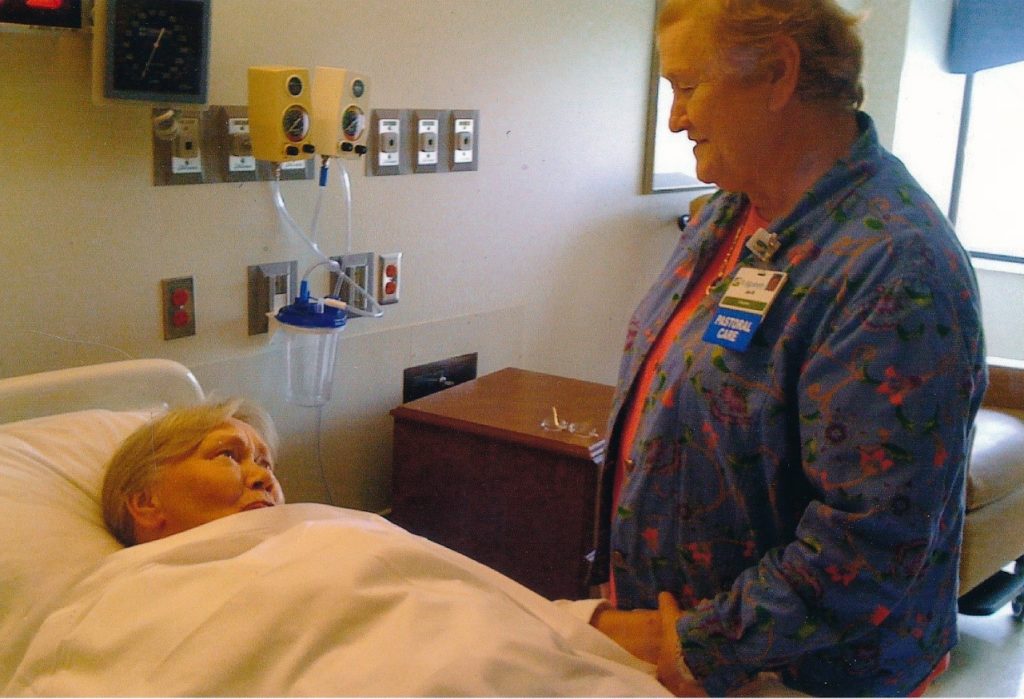 Lifetime Association with the Sisters of Charity is a calling that some respond to after a few years of initial commitment, but for Jan Metz, it was a lifelong calling. Jan, who made her commitment for Lifetime Association five years ago, is proud to be part of a Community that shares her same values.

The Sisters are involved in the history of many of the Associates, but few of them have the pleasure of meeting them so early. When Jan and her twin sister were 5 years old, their mother underwent serious back surgery for a ruptured disc. Her father was the only person allowed to visit her and, while they were waiting anxiously in the hospital during the operation, the Sisters of Charity watched and cared for the siblings. “The Sisters were really sweet to us,” Jan says. “They gave us candy as they walked by and always checked on us. That was my first meeting with them.”

Though she was taught by the Sisters of Mercy as a child, Jan continued to feel drawn towards the Sisters of Charity after her first encounter, which carried into her adulthood. Jan continued to meet the Sisters of Charity throughout her career, even teaching with them at St. Therese Little Flower Catholic Church in Cincinnati, Ohio, where the Sisters affirmed Jan’s calling as a teacher. During this time, Jan read Elizabeth Seton’s biography and became fascinated with the saint. She also served as a hospital chaplain and trained dietician before and during her 35 years in education and connected with the Sisters of Charity in this service as well. One of these Sisters was the late S. Michael Ann Daly, her boss during her time as a chaplain. According to Jan, S. Michael Ann was highly influential in her becoming an Associate since she recommended it to her in the first place. “When I began the process of Association, I noticed how welcoming the Sisters were,” Jan says. “I attended retreats with Sisters of Charity and I felt like I belonged.”

Mary Ann Humbert prepared Jan for her Association in 2001. Jan continued to attend various retreats at the SC Motherhouse, but she felt the need to make a stronger commitment as a Lifetime Associate. Before the discernment period for Lifetime Association, Jan chose S. Maureen Heverin, a friend that she met during her retreats at the SC Motherhouse, as her mentor. With a revitalized passion for the Congregation as a result of this discernment, Jan made her Lifetime Commitment in 2015. “Once I became an Associate, it was a Lifetime Commitment for me already,” Jan says. “It feels like I’ve always been a Lifetime Associate because my mind has never left here.”

Jan has since retired from teaching, but she is still involved in her 30-year chaplain ministry at St. Elizabeth Healthcare. In addition, she is on the advisory board for the SC Office of Peace, Justice and Care for Creation (OPJCC). Her presence on the board prompted her to visit the Esther Marie Hatton Center for Women at Shelterhouse located in Cincinnati, Ohio. This visit was eye-opening for the group and inspired Jan and the others to assist OPJCC Director Debbie Weber with a new project: During Lent, they are gathering hygiene products like toothbrushes and liquid laundry detergent for the people of Shelterhouse. “Service is a holy longing that I’ve had forever,” Jan says. “I feel supported by the Sisters in my prayer-life and my ministries.”

Prior to becoming a Lifetime Associate, Jan’s faith was enhanced by what she believes were signs from God to associate with the Sisters of Charity. In addition to being mistaken for a Sister at times during her chaplain ministry, Jan recalls one instance after Mass when a man from her parish gave her a holy card with Elizabeth Seton on it. These were just a few of the lifelong signs that Jan received that made her dedicate the rest of her life to God’s will, making her faith stronger than ever. “You never know how God is going to work,” Jan says. “But when you do God’s will, you’re just happier.”

This happiness takes form in Jan’s volunteer work and her relationships with others. Jan hopes to honor her commitment through her lifelong relationships with the Sisters of Charity that have inspired her since she was a little girl. “It’s been a blessing to be associated with the Sisters of Charity,” Jan says. “It’s a gift to be hand-in-hand with this Community with similar lifestyles, prayer-lives and missions.”