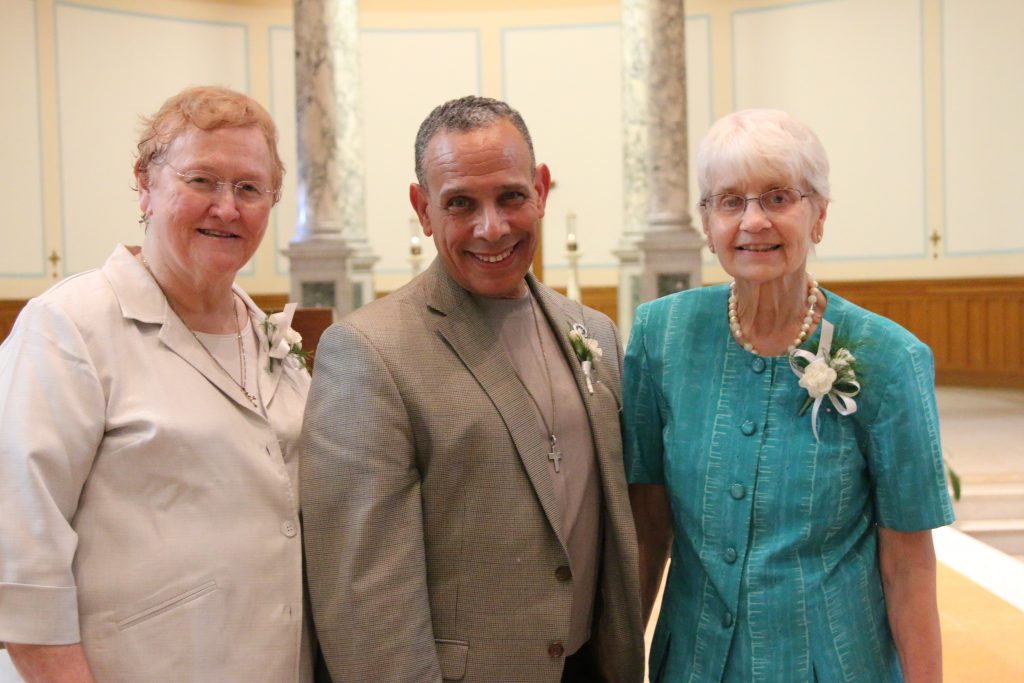 Brother Gary Sawyer made his Lifetime Commitment as an Associate in Mission alongside Associates Jan Metz (left) and Ruth Meyer.

As a child, Brother Gary Sawyer spoke about two vocations that he wanted to honor when he grew up: that of religious life and the other as educator. However, due to the Sisters’ presence and encouragement of these two dreams, Brother Gary also found a vocation in becoming a Lifetime Associate of the Sisters of Charity of Cincinnati.

Brother Gary first met the Sisters of Charity at Sacred Heart School in Denver, Colorado, where, as he says, the seeds for many friendships and lifelong relationships had their start. “Sisters Michael Mary Egan, Marie Virginia Lovato, Ann Martin Klee, and Helen Seton Graves made a strong impression on me and my family,” he said. “The Sisters were friends to us.”

After his time at Sacred Heart, Gary and his brother and sister attended Loyola Grade School in Denver where he met his dear friend, S. Sue Verbiscus, and then the late S. Vincent De Paul Grilliot, principal at Cathedral High School; both women played key roles in his discernment as an educator, in his vocation to religious life, and as an Associate in Mission with the Sisters of Charity.

At the encouragement of the late S. Ann Jude Lynch, Gary wrote to the Brothers of the Poor of St. Francis at Mt. Alverno (Cincinnati) requesting vocational materials. He entered the community in 1984, where he once again was reunited with the Sisters of Charity, this time through the inner-community novitiate program at the Mount St. Joseph Motherhouse. Those opportunities offered new connections to be made. “Now there were more Charities, more friends, deeper relationships, and a more significant presence of God and the compassion, kindness, and charity of His beloved Son, Jesus, in my life,” he added.

After making first vows with the Brothers, Gary served his first mission in Hamilton, Ohio, as director of the Creative Center for Children at the Presbyterian Church. He returned to Denver to finish his undergraduate degree at Loretto Heights College/Regis University. Returning to Denver he was once again reunited with the Sisters of Charity when he was hired by S. Mary Ellen Roach to teach third grade at Loyola Grade School.

Around this time Gary felt the need for further discernment of religious life, and departed with the Brothers. It wasn’t long, however, before Gary said he felt the void of the good he had experienced in religious life. He remained ever grateful for his initial formation with the Brothers, and to this day continues to credit Franciscan Spirituality as the foundation of his spiritual development through the guidance of his well-admired director of formation, Brother William Anuszkiewicz, CFP. With the support of the Sisters at Loyola School – Sue Verbiscus, Janet Marie Wehmhoff and Mary Ellen Roach – Gary joined a group of Brothers who were starting a new community known as the Emmaus Community of St. Augustine (ECSA), out of New Jersey. He was able to remain in Denver and made his final commitment to vowed life at St. Ignatius Loyola Church in Denver in 1992, witnessed by Sisters Mary Ellen, Sue, Janet Marie, and the late Rev. John Brady, S.J.

Brother Gary made his initial commitment as an Associate in Mission in 2002 with S. Vincent De Paul as his companion. In the same way that he was once inspired by the Sisters through their service in education, Gary has spent much of his time ministering in education. His experience teaching at Loyola Catholic Grade School led him to earn two master’s degrees in school administration and curriculum development, and serve as chair of the Early Childhood Education Department at Community College of Denver. In addition to being an elementary and higher education teacher, Brother Gary served as a childcare licensing specialist for the State of Colorado and is now an adjunct faculty member for the Community College of Denver.

As the only remaining member of the Emmaus Community, he made his Lifetime Commitment to the Sisters of Charity on June 14, 2015. He says, “My call to religious life and my desire to teach in the early learning field and use of my talent and skills in photography, has readied me for a place to serve and love the Family of Charity,” he said.

“It is through my relationship with my Sisters that I have a deeper understanding of love, compassion, acceptance, belief, surrender, patience, and the presence of our loving God in all creation and every journey.”